Deandre Ayton had 14 points and 10 rebounds, Chris Paul added 13 points and 10 assists and Phoenix had only three turnovers to tie the franchise record. The Suns have won 17 of their last 21 games and are 37-15 overall.

Raul Neto had a career-high 24 points for the Wizards, and Russell Westbrook added his NBA-leading 22nd triple-double with 17 points, 14 assists and 11 rebounds. They played without NBA scoring leader Bradley Beal.

There were 13 ties and 10 lead changes in the first half. Jae Crowder hit a 3-pointer with a second left in the second quarter to give the Suns a 57-55 halftime advantage.

The Suns opened the third quarter with a 21-4 run. Booker had 10 points in that stretch. 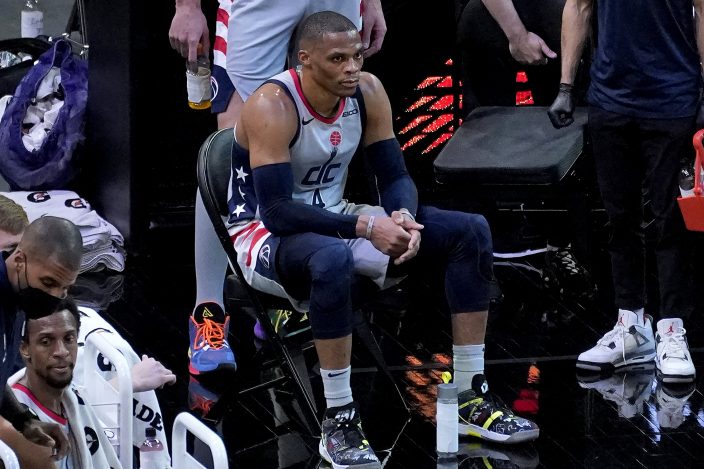 Washington Wizards guard Russell Westbrook (4) watches from the bench during the second half of an NBA basketball game against the Phoenix Suns, Saturday, April 10, 2021, in Phoenix. (AP PhotoMatt York)

Beal sat out the game because of back tightness.

Wizards: Daniel Gafford, who was acquired by the Wizards in a trade with the Bulls at the March 25 trade deadline, returned to action after missing the previous six games with a right ankle sprain. He scored seven points in 14 minutes. … The Wizards fell to 8-17 on the road. … The loss snapped a five-game winning streak for the Wizards in the Valley of the Sun. … Thomas Bryant remained out with a left ACL injury and Davis Bertans (rest) also sat out.

Suns: Phoenix improved to 20-8 at home. The Suns evened the season series at 1-1. The last time Phoenix won the series was in 2014-15. …. The win also snapped a five-game losing streak to the Wizards at home. … The Suns have not lost consecutive games in more than two months since they lost three straight in late January. … Abdel Nader sat out his 11th straight game with right knee soreness.

Wizards: At Utah on Monday night.