A pair of three-time Cy Young Award winners square off when Clayton Kershaw and the Dodgers face Max Scherzer and the Nationals in a marquee matchup between the past two World Series champions. Los Angeles is looking for a three-game sweep of its first home series this season, and Dodgers starters are 5-0 in their last seven outings. 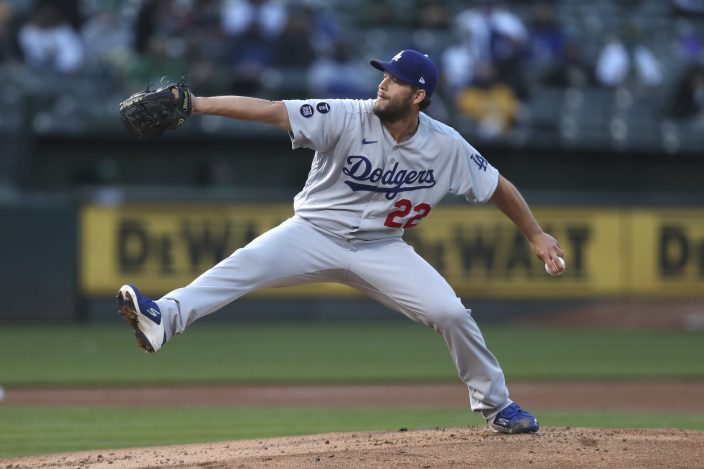 The Dodgers have won five of their last six regular-season games against the Nationals and are 11-4 versus Washington over the past four seasons. But the Nats beat Los Angeles in a five-game playoff series on the way to their 2019 title.

AL MVP José Abreu and the Chicago White Sox will try to win their 18th straight game when facing a left-handed starter. That would tie the major league record set by Atlanta from 2004-05. 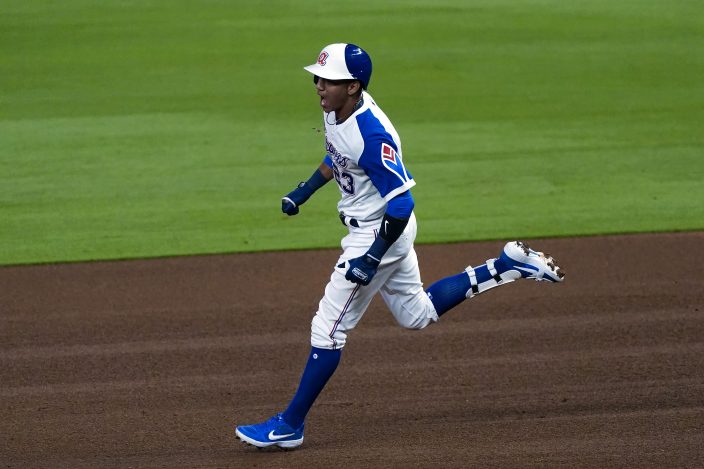 Atlanta Braves' Ehire Adrianza (23) reacts as he rounds the bases after hitting a three-run in the sixth inning of a baseball game against the Philadelphia Phillies, Friday, April 9, 2021, in Atlanta. (AP PhotoJohn Bazemore)

The White Sox get their chance when they host Mike Minor and the Royals. Chicago’s streak dates to a loss to Detroit on Sept. 28, 2019, when lefty Tyler Alexander started for the Tigers.

HOME OF THE BRAVE

It's been a big week for Atlanta reserve Ehire Adrianza. He was reinstated from the restricted list before Friday night’s game against Philadelphia, just in time to launch his first pinch-hit homer — a three-run shot. Adrianza had been away from the team while completing his citizenship test. He added a pinch-hit double Saturday and scored the go-ahead run. 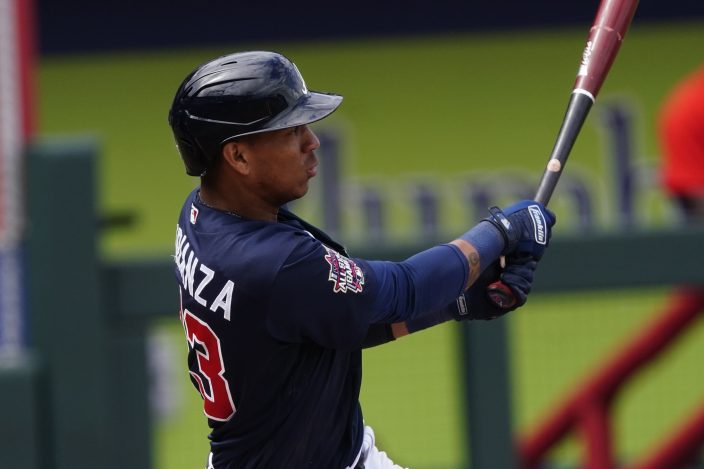 Atlanta Braves' Ehire Adrianza follows through on a two-run base hit in the fifth inning of a spring training baseball game against the Boston Red Sox, Saturday, March 20, 2021, in North Port, Fla.. (AP PhotoJohn Bazemore)

“I’m glad to be a U.S. citizen,” said the 31-year-old Adrianza, a native of Venezuela who played the past four seasons with Minnesota following four with San Francisco.

Adrianza and the Braves go for a series sweep when they host the NL East rival Phillies in prime time. Atlanta opened the season with four consecutive losses, the first three in Philadelphia, but has recovered quickly with a four-game winning streak. Drew Smyly makes his first home start for the Braves against Matt Moore.

Nolan Arenado has gotten a hit in each of St. Louis’ eight games this season. The hitting streak matches Roger Maris (1967) for the longest among players new to the Cardinals. The former Colorado star is hitting .333 with two home runs and five RBIs.

The Twins have lost three times this season — all of them in 10th inning with the automatic runner on second base.

“The game, as we are used to playing it, does change, and we have to adapt to that,” Minnesota manager Rocco Baldelli said.

Seattle topped the Twins 4-3 in the 10th on Saturday, helped when Minnesota reliever Taylor Rogers couldn’t get a clean grip on a bunt.

Yankees newcomer Jay Bruce batted ninth for the first time in his career in a game at Tampa Bay. The 34-year-old Bruce, in his 14th season, had started at every spot in the lineup except last until Saturday.

Nadal: Madrid loss a step backward ahead of French Open

Biden move to share vaccine designed to spread US influ ...

It won’t speed the manufacture of ...