SEOUL, South Korea — South Korea says it will resume administrating AstraZeneca’s coronavirus vaccine to all eligible people between the ages of 30 and 60.

Last week, South Korea suspended the use of AstraZeneca vaccines for those 60 years old or younger while awaiting the outcome of the European Medicine Agency’s review.

The Korea Disease Control and Prevention Agency said Sunday it will restart the use of AstraZeneca vaccine beginning Monday, citing studies showing that the vaccine's benefits outweighs the risk of side effects. 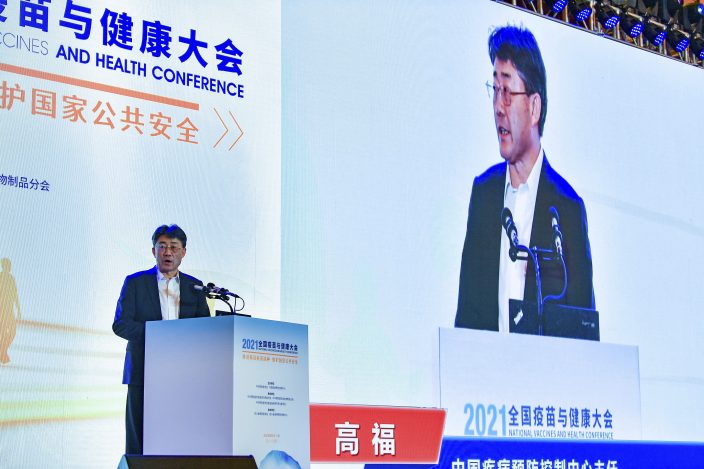 Gao Fu, director of the China Centers for Disease Control, speaks at the National Vaccines and Health conference in Chengdu in southwest China's Sichuan province Saturday, April 10, 2021. In a rare admission of the weakness of Chinese coronavirus vaccines, Gao the country's top disease control official says their effectiveness is low and the government is considering mixing them to give them a boost. (Chinatopix Via AP)

An agency statement said those aged 30 or younger will be excluded, as U.K. authorities have recommended they take alternative vaccines.

It says it’s found three cases of blood clots from vaccinated people in South Korea — but none belong to the type of side effects determined by European authorities.

Those who would get AstraZeneca vaccines from Monday include medical workers and people in long-term care facilities, those at special schools and welfare centers for disabled people and homeless people. 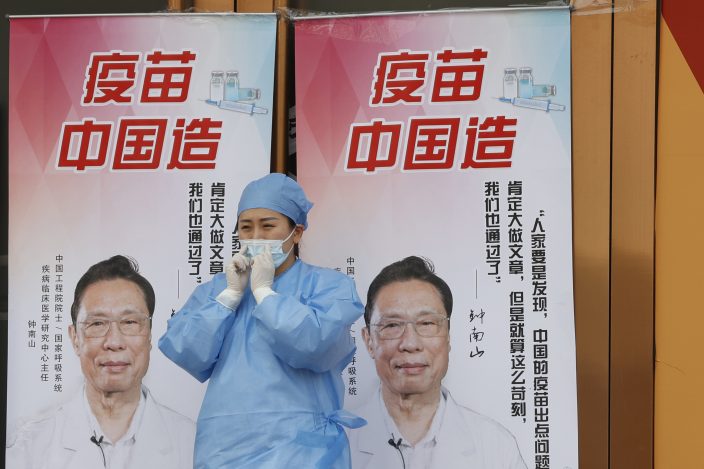 A medical worker adjusts her mask near propaganda boards showing famed Chinese medical expert Zhong Nanshan and the words "Vaccine China Made" outside vaccination center in Beijing Friday, April 9, 2021. In a rare admission of the weakness of Chinese coronavirus vaccines, the country's top disease control official says their effectiveness is low and the government is considering mixing them to give them a boost. (AP PhotoNg Han Guan)

— More Black Americans say they are open to taking vaccine

All the new infections were believed have been acquired abroad, the National Health Commission announced Sunday.

The National Command and Control Center announced Sunday that 114 deaths from coronavirus had been confirmed, as well as more than 5,000 new cases.

A weekend ban on inter-city transport has been extended until mid-April, as part of measures to control a surge in virus infections and deaths. The ban will not apply on freight, ambulance services and supplies of medical equipment.

Pakistan, with a population of 220 million people, has vaccinated more than a million people using the Chinese Sinopharm vaccine since February.

BUCHAREST — Marchers have taken to the streets of the Romanian capital of Bucharest to protest restrictive measures to fight the spread of COVID-19 even as new daily infections and deaths rise in the European Union nation.

About 1,000 people converged Saturday on Victory Square and University Square, expressing frustration with an earlier curfew and shop closures that took effect at the end of March. Many demonstrators waved tri-color Romanian flags and chanted “Freedom!” and “Down with the government!”

“We came to fight against this state of alert that buries all our rights and freedoms,” Dumitru Balan, leader of the civic movement Action for the Nation, told The Associated Press.

The protest was held on the same day that Romania passed 1 million confirmed COVID-19 cases. Hospital intensive care units are struggling to cope with the record demand of just under 1,500 COVID-19 patients; 12,000 others are in other wards.

“There are now very severe patients admitted in our clinical ward that normally would require intensive care … we don’t have enough ICU beds available and patients are waiting with sub-optimal care,” Dragos Zaharia, a pneumologist at Marius Nasta Institute, told the AP. “We are at risk of being accused of malpractice.”

NEW YORK — State lawmakers across the U.S. are taking actions to limit the emergency powers of governors — not just in the current coronavirus pandemic, but for any future emergencies.

The pushback is coming primarily from Republican lawmakers but is not entirely partisan. GOP lawmakers are targeting both Democratic and Republican governors.

When the pandemic hit a year ago, many governors and their top health officials temporarily ordered residents to remain home, limited public gatherings, prohibited in-person schooling and shut down dine-in restaurants, gyms and other businesses. Many governors have been repealing or relaxing restrictions after cases declined from a winter peak and as more people get vaccinated.

The potential remains in many states for governors to again tighten restrictions if new variants of the coronavirus lead to another surge in cases.

The U.S. has recorded 31 million coronavirus cases and more than 561,000 confirmed deaths, the most in the world.

LONDON — As many as 60 countries might be stalled at the first shots of their coronavirus vaccinations because nearly all deliveries through the global program are blocked until as late as June.

The COVAX initiative is designed to provide vaccines to countries lacking the clout to negotiate on their own for scarce supplies. In the past two weeks, only 2 million doses were cleared for shipment to 92 countries through the program, the same amount injected in Britain alone.

The vaccine shortage stems mostly from India’s decision to stop exporting vaccines from its Serum Institute factory because of a surge of coronavirus cases in that country. The factory produces the majority of the AstraZeneca doses that COVAX counted on to supply about a third of the global population.