The family of a 20-year-old Minnesota man told a crowd that he was shot by police Sunday before getting back into his car and driving away, then crashing the vehicle several blocks away. The family of Daunte Wright said he was later pronounced dead.

Officials from the Minnesota Bureau of Criminal Apprehension said the agency was on the scene of a shooting involving a police officer in Brooklyn Center on Sunday afternoon. Meanwhile, the Wrights demanded answers from police.

The incident happened with Minneapolis already on edge and midway through the trial of the first of four police officers in George Floyd’s death. Brooklyn Center is a city with a population of about 30,000 people located on the northwest border of Minneapolis. 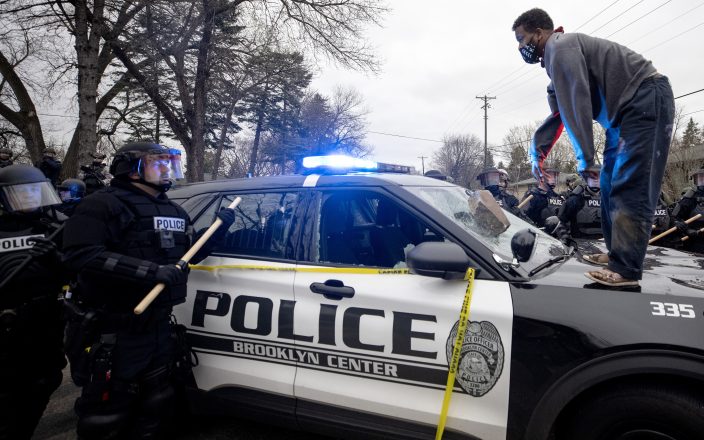 A man stands atop a police car after throwing a brick at the windshield near the site of a shooting involving a police officer, Sunday, April 11, 2021, in Brooklyn Center, Minn. (Carlos GonzalezStar Tribune via AP)

Police did not identify the driver who was shot but said the Hennepin County Medical Examiner’s Office will release the person’s name following a preliminary autopsy and family notification. A female passenger sustained non-life threatening injuries during the crash.

A police officer was also transported to the hospital after sustaining injuries, according to EMS audio, the Star-Tribune reported. By Sunday evening, about 100 people had gathered near the scene, according to the newspaper. 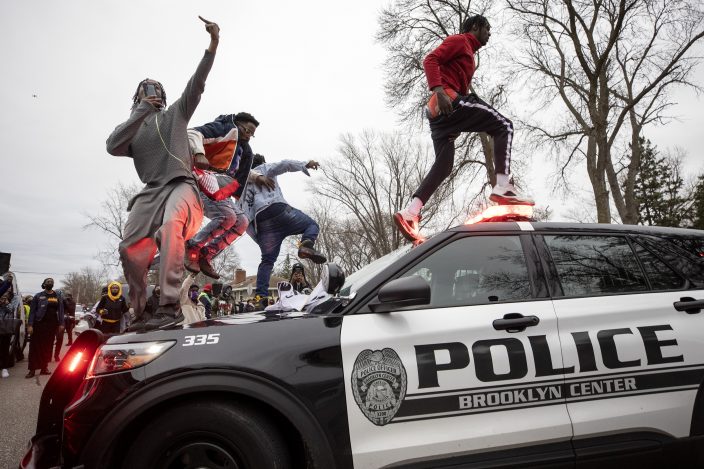 Men jump on police vehicles near the site of a shooting involving a police officer, Sunday, April 11, 2021, in Brooklyn Center, Minn. (Carlos GonzalezStar Tribune via AP)

Katie Wright, Daunte's mother, tearfully pleaded for more information regarding the incident and for her son’s body to be moved from the street.

A woman who lives near the crash scene, Carolyn Hanson, said she saw law enforcement officers pull a man out of a vehicle and perform CPR. A passenger who got out of the car was also covered in blood, Hanson said. Authorities work the scene at the site of a shooting involving a police officer, Sunday, April 11, 2021, in Brooklyn Center, Minn. (Jeff WheelerStar Tribune via AP)

Police said Brooklyn Center officers wear body-worn cameras and they also believe dash cameras were activated during the incident. The Brooklyn Center Police Department said it has asked the Bureau of Criminal Apprehension to investigate.

No further information was immediately available.

Decision expected on charges for cop who shot Black motorist

Protest after chief says officer meant to use Taser, not gun