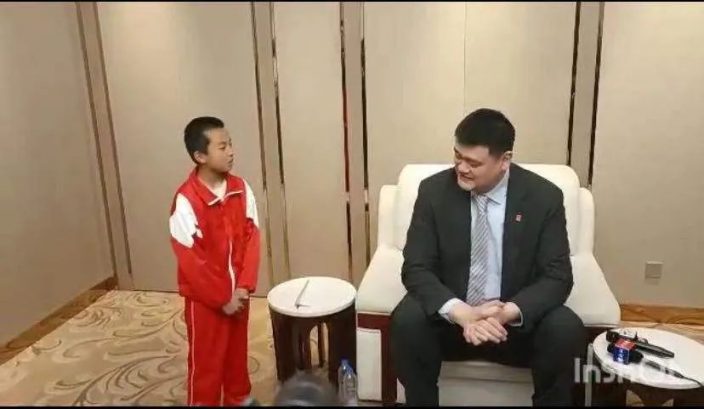 "I feel very happy, excited, joyful. My dream has been realized!" said Wang.

For the 12-year-old boy, Yao is his hero. Several posters of Yao are put on the mottled wall of his bedroom, which keep motivating him to study hard and become a professional basketball player one day.

Yao knows Wang from the news. "It's interesting. I had a teammate also named Wang Lei when I was in the national team, and we participated in the 2008 Beijing Olympic Games together," Yao said.

Wang lives at Wangmin, a mountain village of Xiji county in Ningxia. His hometown located in Xihaigu, which was labeled as the "most unfit place for human settlement" by the United Nations in the 1970s.

Without standard basketball stands or courts in the past, people in Xiji love the sport very much, and a village-level basketball competition usually attracts an audience of over 10,000.

Like Yao, Wang's father is also a center of the village basketball team. Influenced by his father, Wang has fallen in love with the sport since he was six.

At the courtyard of Wang's home, a basketball stands made from an iron ring, two long sticks, and three planks by himself kept his company throughout his childhood.

With a height of about 1.5 meters, Wang, standing aside, was no taller than his hero sitting, but adults in the village basketball team find it hard to stop his attack.

"To have a goal is of great significance. I hope you can figure out your goal when you study or play basketball," Yao encouraged Wang. "You need to make it clear what you want to be."

"I will study hard and enter an excellent high school, then a good college, and become a professional basketball player after graduation," Wang told Yao.

As a grade-one student in Yuanhe Middle School, Wang plays basketball for over two hours on each workday and more than 10 hours at weekends. He has worn out over a dozen of basketballs and more than 20 pair of shoes.

Compared with his father, Wang is lucky. "I used to be covered by dust when tapping the ball and running, but now the cemented floor is all around, and I won't be choked any longer," said Wang.

Thanks to China's poverty alleviation campaign, Xiji exited poverty in November last year. All its 295 villages have benefitted from the Farmers' Fitness Project and were installed with standard basketball stands as well outdoor basketball courts, with a per capita sports area reaching 2.2 squre meters.

The old backboard standing in Wang's courtyard was retired, and he has more places to practice basketball skills. As the class basketball team leader, Wang led his class to win the champion last year.

Though known to his hero, Wang is far from complacent. "My skill is still very poor," he sighed. "I have to practice harder, and Yao has given me more strength."

Yao said Wang represents a group. "We should work harder to find more talents like him and deliver a positive lifestyle with practical measures."

According to Chen Gang, secretary-general of Ningxia Basketball Federation, they will cooperate with CBA to train more professional coaches for Xiji, and hold more school basketball activities and get more students involved in professional training.

"In this way, we can have more basketball boys and girls like Wang and constantly satisfy people's needs for the sports," Chen said.