San Antonio was playing a night after winning in Dallas on a last-second shot by DeRozan, and it showed no signs of fatigue in cruising to the easy win. The Spurs’ victories Sunday and Monday gave them their first consecutive wins since a three-game streak from March 15-19.

Prior to tipoff, the teams, coaching staffs and refereeing crew came together and formed a circle at midcourt with their arms interlocked and their heads bowed to show their displeasure over the fatal shooting of a Black man, Daunte Wright, by police during a traffic stop in a Minneapolis suburb. Spurs coach Gregg Popovich and Magic coach Steve Clifford stood side by side with their arms interlocked during the anthem. 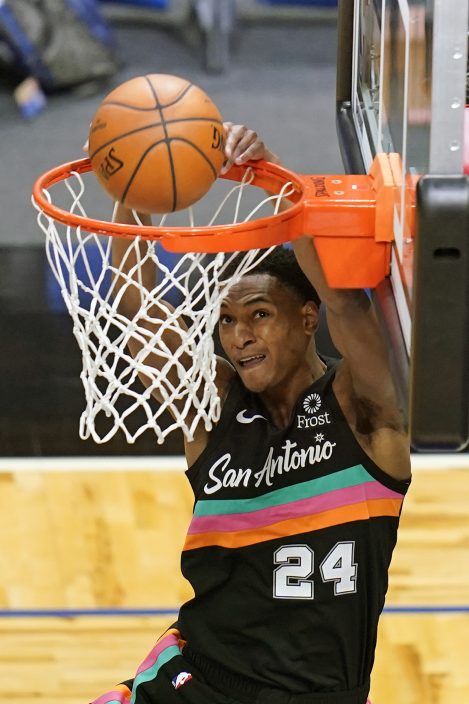 San Antonio Spurs guard Devin Vassell (24) dunks the ball against the Orlando Magic during the second half of an NBA basketball game, Monday, April 12, 2021, in Orlando, Fla. (AP PhotoJohn Raoux)

The Spurs, who beat the Magic 104-77 on March 12 and topped Orlando for a third straight time, wiped out an early six-point deficit and broke the game open by the latter stages of the first period. They led 60-37 at the half, by 30 during the third quarter and didn't allowed their lead fall below 20 throughout the second half.

DeRozan made 7 of 11 shots for a Spurs squad that shot 51.6%. DeRozan added six assists for the Spurs, who pulled within a half-game of the Memphis Grizzlies for the No. 8 spot in the Western Conference.

Derrick White had 15 points and four assists, while Lonnie Walker IV and Rudy Gay had 12 points. 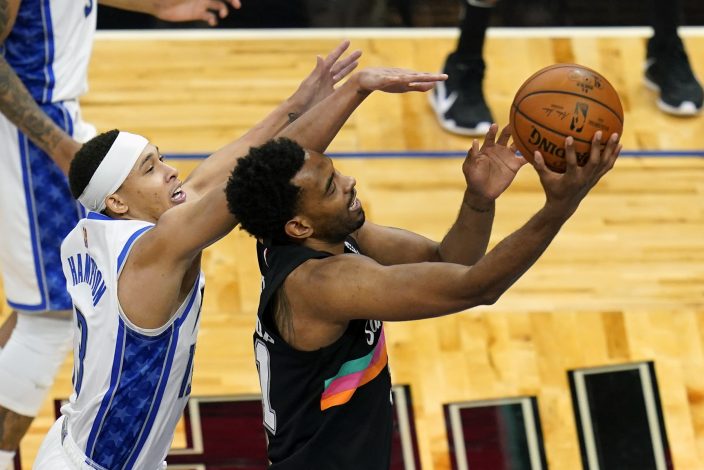 San Antonio Spurs forward Keita Bates-Diop, right, makes a shot as he gets past Orlando Magic guard R.J. Hampton during the second half of an NBA basketball game, Monday, April 12, 2021, in Orlando, Fla. (AP PhotoJohn Raoux)

Spurs: With an average age of 25 years and six months, this San Antonio team is the youngest that Popovich has guided since becoming head coach in 1996. The Spurs have nine players on the roster younger than 25 years old. 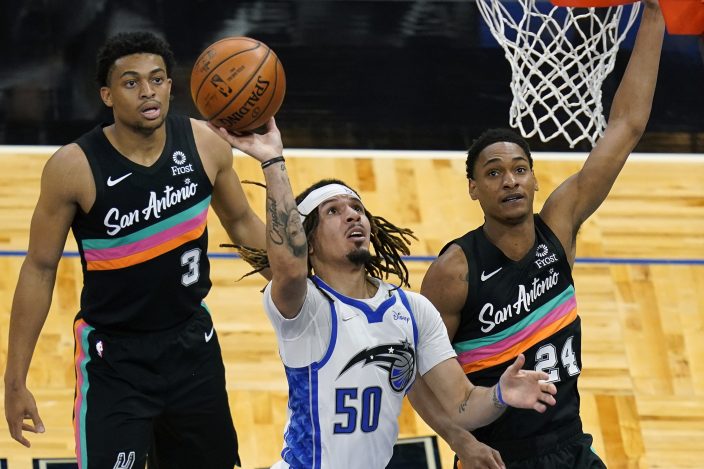 Orlando Magic guard Cole Anthony (50) takes a shot as he gets between San Antonio Spurs forward Keldon Johnson (3) and guard Devin Vassell (24) during the first half of an NBA basketball game, Monday, April 12, 2021, in Orlando, Fla. (AP PhotoJohn Raoux)

Magic: Magic center Mo Bamba, who set a career high in scoring twice in the past three games, left Monday’s game in the first quarter with a hip contusion and did not return. ... Point guard Cole Anthony, who played well in his first three games back from a rib injury, picked up three fouls in a four-minute stretch of the first quarter.

Spurs: Versus Toronto in Tampa, Florida, on Wednesday night. 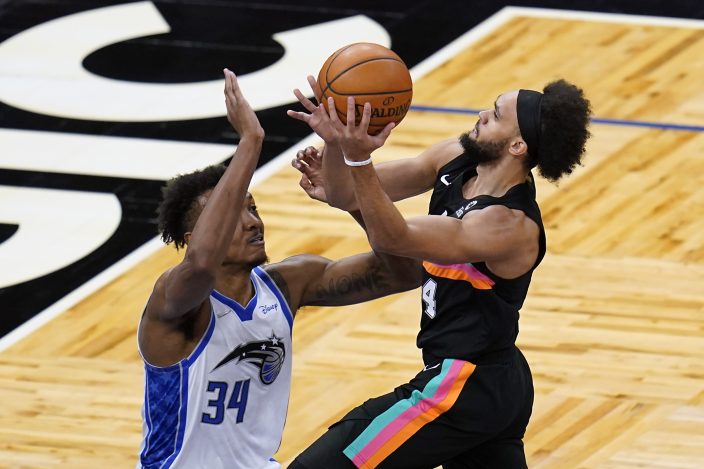