Kyle Schwarber doubled in a run in his delayed Nationals debut, Andrew Stevenson had a pinch-hit homer and Washington beat the St. Louis Cardinals 5-2 Monday night.

Schwarber, Josh Bell and Josh Harrison were in the starting lineup after being sidelined for Washington's first six games by a coronavirus outbreak that prompted the postponement of the team's season-opening series and left the club short-handed. The Nats ended a five-game skid, while the Cardinals have lost three straight.

Stevenson hit his first homer of the season into St. Louis' bullpen in right field to lead off the seventh, putting Washington ahead 4-2. The solo shot was just his fourth homer in 221 career at-bats. 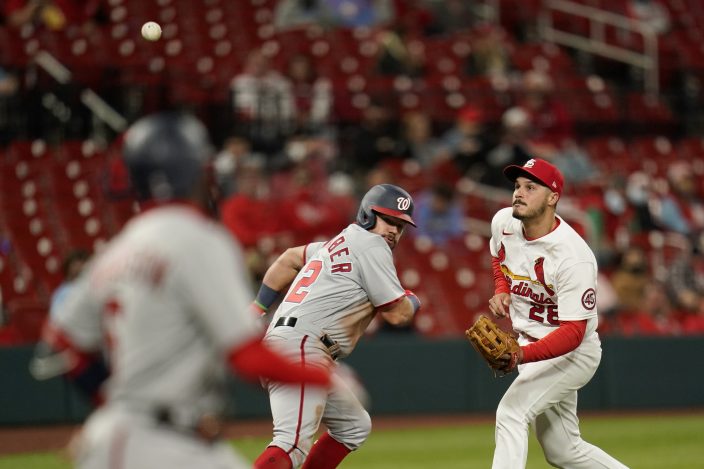 St. Louis Cardinals third baseman Nolan Arenado, right, runs to catch a bunt popped up by Washington Nationals' Josh Harrison, left, for an out as Nationals' Kyle Schwarber, center, heads back to third during the sixth inning of a baseball game Monday, April 12, 2021, in St. Louis. (AP PhotoJeff Roberson)

Schwarber, acquired in the offseason after being nontendered by the Chicago Cubs, hit a 1-0 pitch from starter John Gant into right-center to drive in Juan Soto, who singled to start the sixth.

The Nationals added a run on the next pitch off reliever Giovanny Gallegos when Starlin Castro hit a sacrifice fly in foul territory to right, driving in Bell. 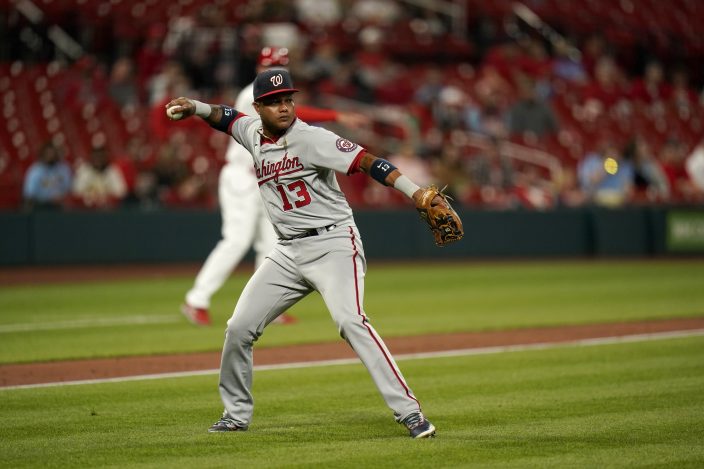 The Nationals had a chance to blow the game open when the first four batters reached to start the eighth against reliever Andrew Miller, including Castro singling in Bell. Ryan Helsley struck out Yan Gomes, and pinch-hitter Ryan Zimmerman flew out to center fielder Dylan Carlson, who threw Schwarber out at home to end the inning.

Yadier Molina hit his second homer of the season in the sixth to pull the Cardinals within 3-2. 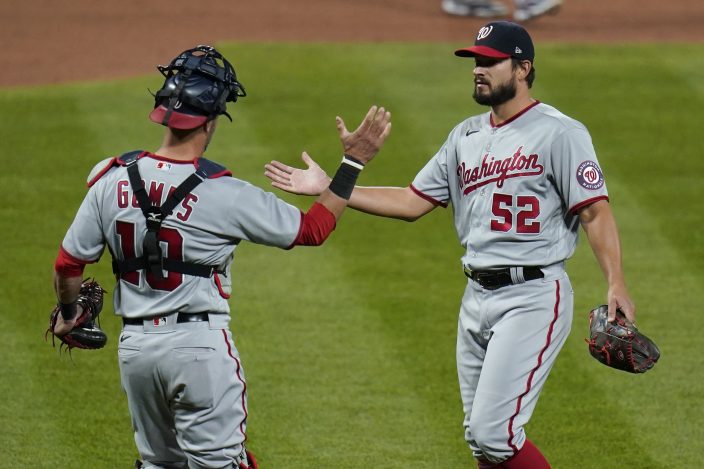 Matt Carpenter broke an 0 for 12 start to the season with a bunt single in the third and scored on Tommy Edman’s hit, tying the game at 1. Carpenter has struggled at the plate since spring training with just two hits in 37 at-bats, including 13 strikeouts.

Victor Robles led off the game with his second triple of the season and scored on Soto’s one-out single to give the Nationals a 1-0 lead. 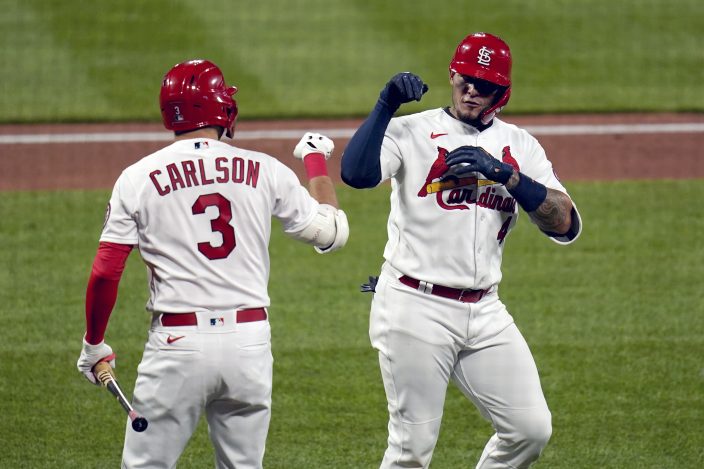 Nationals: Schwarber, Bell and Harrison were reinstated from the COVID-19 injured list before the game. The moves make the team’s roster nearly whole again after an outbreak sidelined nine players and postponed four games. Five players returned over the weekend; the only one still missing is LHP Jon Lester, who will ramp up at the team’s alternate training site before joining the Nationals. Manager Dave Martinez said most of the players on the team were vaccinated at their hotel in St. Louis.

Cardinals: St. Louis is closer to having two of its starting pitchers back from the IL. LHP Kwang Hyun Kim (back tightness) threw 86 pitches Sunday, and manager Mike Schildt said everything looked good for him to get back to the club soon, though he didn’t give a timeline. ... Shildt also said the progress of RHP Miles Mikolas (shoulder stiffness) is on target. He threw a bullpen session Monday at Busch Stadium. He’ll throw another in a few days after which the Cardinals will determine if he’s ready to face hitters. 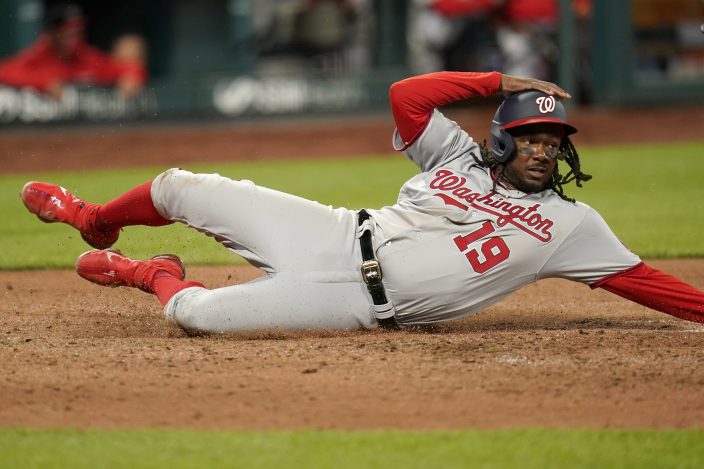 Nationals: RHP Stephen Strasburg (0-0, 0.00 ERA) starts Tuesday. He gave up one hit while striking out eight over six scoreless innings in a 2-0 loss in the second game of a doubleheader April 7 against Atlanta.

Cardinals: RHP Jack Flaherty (1-0, 5.23 ERA) gets his third start of the season and is coming off a strong outing at Miami, where he gave up one hit and struck out six in six shutout innings.