Rookie Casey Mize tossed seven scoreless innings for his first career win and fellow rookie Akil Baddoo homered again as the Detroit Tigers got a 6-2 win over the Houston Astros on Monday night in manager A.J. Hinch’s first trip to Houston since he was fired for the team’s sign-stealing scheme.

Renato Núñez and Grayson Greiner also homered as the Tigers jumped on Zack Greinke (1-1) for six runs to snap a four-game skid.

Hinch spent five seasons in Houston, helping turn around a team that had sunk to embarrassing lows during a rebuild in the years before he arrived. The Astros won more than 100 games in each of his last three seasons, capped by a franchise-best 107 wins in 2019 when they lost to the Washington Nationals in the World Series. 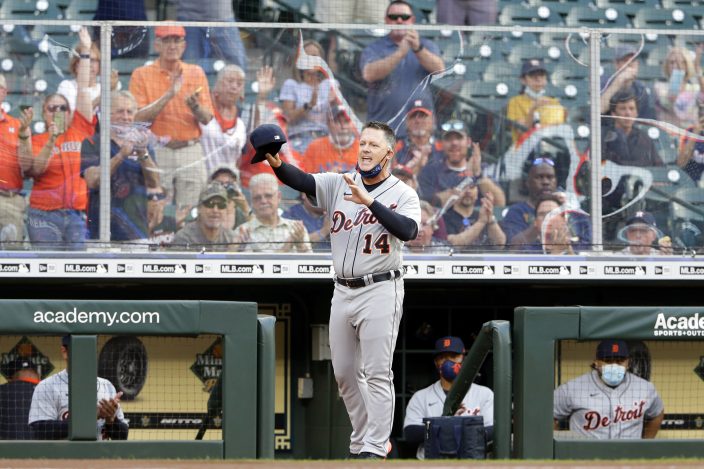 Detroit Tigers manager A.J. Hinch (14), the former Houston Astros manager, comes out of the dugout to acknowledge the crowd on his first visit back to Minute Maid Park before a baseball game against the Astros, Monday, April 12, 2021, in Houston. Hinch was fired by the Astros in 2019 for his part in the Astros cheating scandal. (AP PhotoMichael Wyke)

He received a standing ovation when he was introduced before the game and the team played a tribute video to him on the big screen. As the last frame of the video displayed the words: “Thank you A.J.,” he stepped onto the field and tipped his cap to the crowd, which roared with approval.

Hinch was suspended by baseball Commissioner Rob Manfred for a year in January 2020 and subsequently fired by owner Jim Crane for his role in the scheme that violated rules by using a video camera to steal catchers’ signs during Houston’s run to the 2017 World Series title and again in the 2018 season.

His two up-and-coming stars helped him to a sweet return as the Tigers handed the Astros their third consecutive loss after a 6-1 start. Mize (1-0), the top overall pick in the 2018 amateur draft who was making his ninth start, yielded four hits and fanned five in the longest start of his big league career. 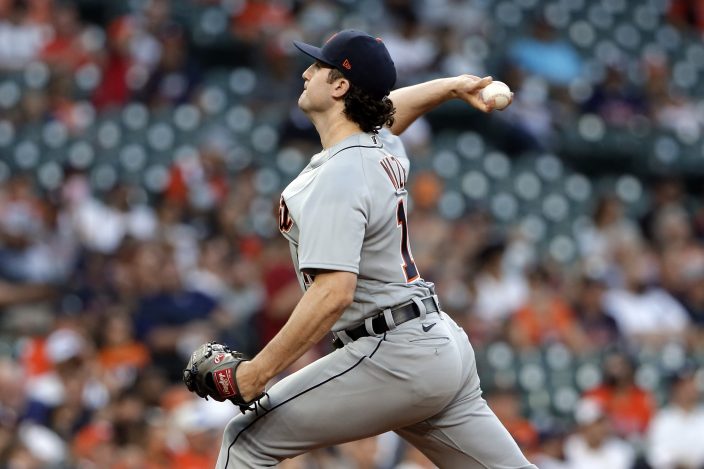 Mize got stronger as the game progressed, retiring nine of the last 10 batters he faced before being replaced by Buck Farmer to start the eighth.

The Tigers didn’t score in the first inning, but they taxed Greinke, forcing him to throw 27 pitches to escape a bases loaded jam. His trouble continued in the second when Núñez doubled to start the inning before Greiner’s one-out shot to right field made it 2-0.

Núñez and Baddoo hit back-to-back homers with two outs in the third to extend the lead to 4-0. Baddoo, who homered on his first major league pitch last week, drove a fastball from Greinke 450 feet to the seats in center field for his third career homer. 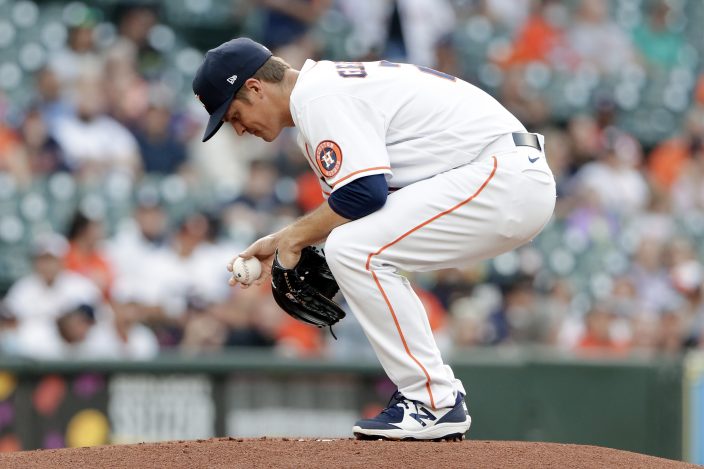 Houston Astros starting pitcher Zack Greinke takes a moment on the mound with the bases loaded during the first inning of a baseball game against the Detroit Tigers Monday, April 12, 2021, in Houston. (AP PhotoMichael Wyke)

The 22-year-old Baddoo hit a sacrifice fly in the fifth, and Greiner chased Greinke with an RBI single after that.

The Astros went 0 for 11 with runners in scoring position, but got solo homers from Michael Brantley in the eighth and Carlos Correa in the ninth to avoid a shutout. 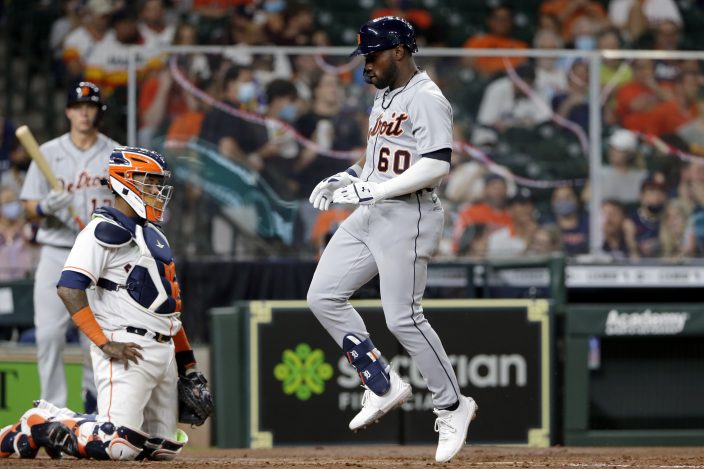 Tigers: A day after Miguel Cabrera landed on the 10-day injured list with a left biceps strain, Hinch said that that tests showed that it was a mild strain. But Hinch still isn’t sure how long it will keep the slugger out. “We don’t feel like it’s major, but we feel like he’s going to need a little bit of rest and some therapy in order to get himself back ramped up, and we’ll see how long that takes,” Hinch said. 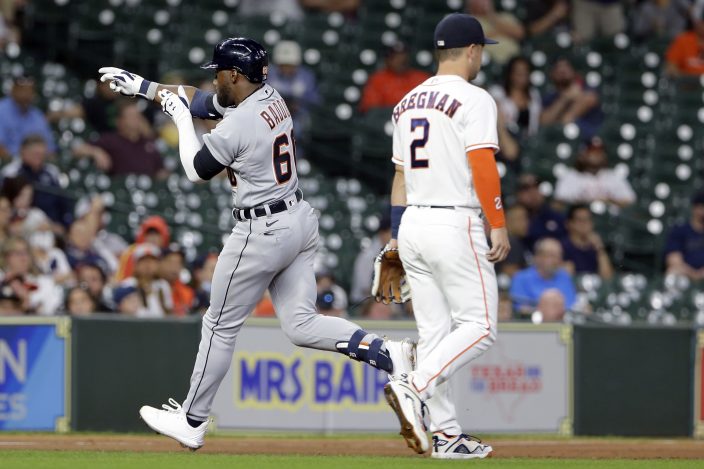 Detroit Tigers' Akil Baddoo, left, points to the stands as he crosses Houston Astros third baseman Alex Bregman, right, as he rounds the bases on his home run during the third inning of a baseball game Monday, April 12, 2021, in Houston. (AP PhotoMichael Wyke)

Houston’s Jake Odorizzi will make his season debut when the series continues Tuesday night. Odorizzi’s first start of the season was delayed because he didn’t sign with the Astros until March 8. He’ll oppose left-hander Matthew Boyd (1-1, 2.13 ERA).