Jonas Valanciunas had 26 points and 14 rebounds, leading a fourth-quarter burst that carried the Memphis Grizzlies to a 101-90 victory over the Chicago Bulls on Monday night.

Valanciunas, who had 32 points and 22 rebounds a night earlier in a loss to the Indiana Pacers, scored 10 in the fourth as Memphis used an 18-6 run to break open a close game. Zach LaVine scored 21 points, but he was just 5 for 14 from the field as the Bulls lost their third straight. Thaddeus Young scored 20 and Daniel Theis had 18. Nikola Vucevic finished with 17 points and 10 rebounds.

Valanciunas’ double-double was his 15th in a row, setting a franchise record.

The teams stayed close through the first three quarters. Vucevic provided a bit of a buffer for the Bulls, scoring 12 in the period for a 74-70 Chicago lead entering the fourth. 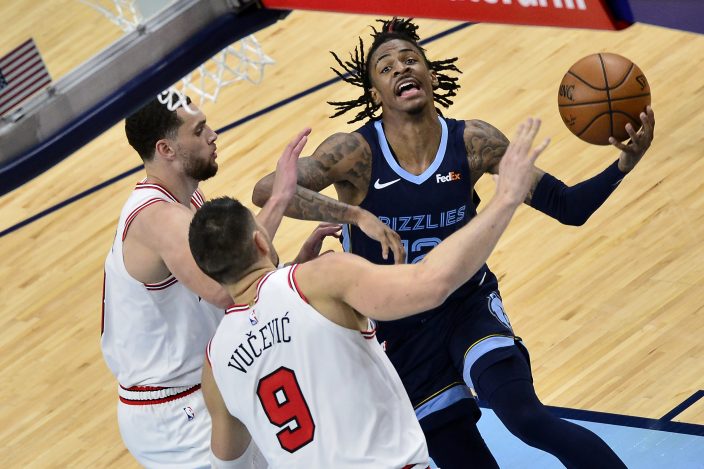 The game was originally scheduled for Jan. 27, but called off due to health and safety protocols. That left both teams playing Monday on the second night of a back-to-back, and coming off losses.

Both teams fell short of overcoming double-digit deficits in Sunday games – Memphis to Indiana and the Bulls to the Timberwolves.

The lingering effects of the consecutive games showed early. Neither team managed more than 46% shooting in the first half, and Memphis added to its problems with a dozen turnovers, while the Bulls committed nine. Neither team led by double digits until Memphis' run in the fourth.

Bulls: The game wrapped up a span where Chicago played nine of its last 10 on the road. The exception was a home win over Brooklyn on April 4. … Theis was 7 of 8 in the first half, scoring 14 points. … Vucevic tied his season high with five steals. … Chicago's six-game winning streak in the series was snapped. ... With 23 assists, its streak of nine straight games with at least 25 assists ended. 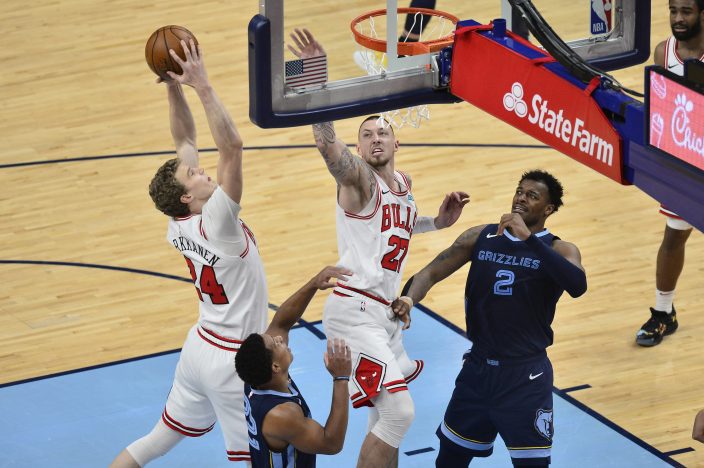 Grizzlies: Travel to Chicago on Friday for the second game of the season home-and-home series. The game in Chicago is the first of a seven-game road trip for Memphis. … Valanciunas’ streak topped Zach Randolph’s consecutive games with a double-double from 2011.

In his pregame comments, Grizzlies coach Taylor Jenkins addressed the shooting of Daunte Wright in a Minneapolis suburb. Jenkins said the incident “has just been another reminder about how there is so much change that needs to happen in our country.” 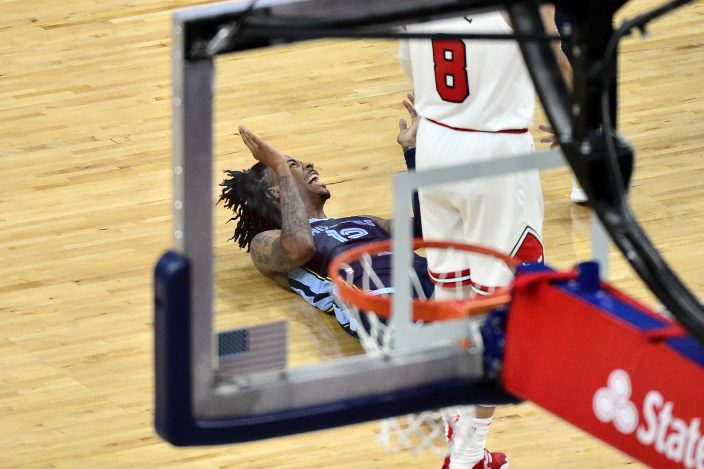 Memphis Grizzlies guard Ja Morant (12) laughs on the court in the second half of an NBA basketball game against the Chicago Bulls, Monday, April 12, 2021, in Memphis, Tenn. (AP PhotoBrandon Dill)

“More work needs to be done,” Jenkins said, “and we talked as a team about the importance of using our voices to speak out on injustices, how there needs to be equality for all, how these situations are avoidable and change needs to happen. There’s a long road ahead.”