Jae Crowder scored 26 points, Devin Booker added 24 and the Phoenix Suns tied an NBA record with 18 3-pointers in the first half on the way to a 126-120 victory over the Houston Rockets on Monday night.

The long balls came in bunches for both teams in this contest, which at times resembled a game of H-O-R-S-E. The Suns finished with a franchise-record 25 3-pointers and the Rockets added 17. The combined total of 42 3s was one shy of an NBA record.

The Suns jumped out to an 81-58 lead by halftime after making 18 of 24 (75%) 3s. Crowder was causing a big chunk of the damage, scoring all of his points in the first half while making 8 of 9 from behind the arc as a socially distanced crowd got louder with each shot. 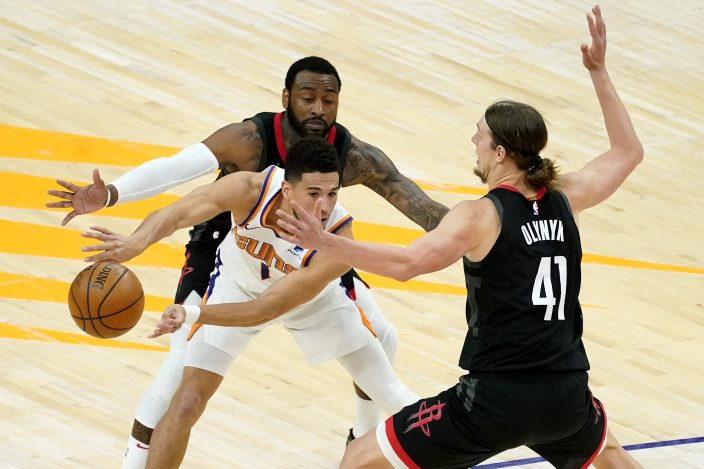 Crowder had previously never made more than six 3-pointers in a game. The Suns matched the record set by the Utah Jazz, who hit 18 3s in the first half earlier this season in a game against Orlando.

Despite the Suns’ hot shooting, the Rockets were able to stay relatively close because they were pouring in buckets as well. The Suns led 103-88 at the end of the third.

Houston pulled within 114-109 with 5:45 remaining but Phoenix responded with the next six points — on three rare 2-point buckets — and the Suns were able to hold on for the win. 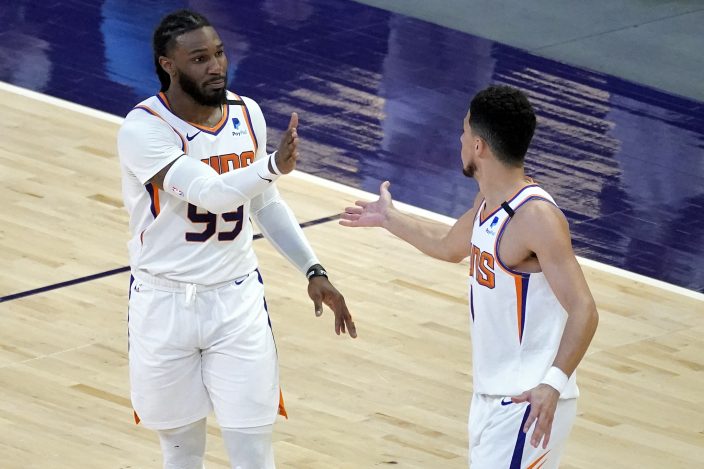 Phoenix Suns forward Jae Crowder (99) celebrates his three pointer with guard Devin Booker during the first half of an NBA basketball game against the Houston Rockets, Monday, April 12, 2021, in Phoenix. (AP PhotoMatt York)

Phoenix was undeniably on a roll, especially in the first half, but one reason was Houston’s poor defense. Several of the Suns’ looks were wide open.

The Rockets have lost eight of their past nine, including the last three in a row, and fell to 14-40 this season. The Suns have won nine of 10 and improved to 38-15. 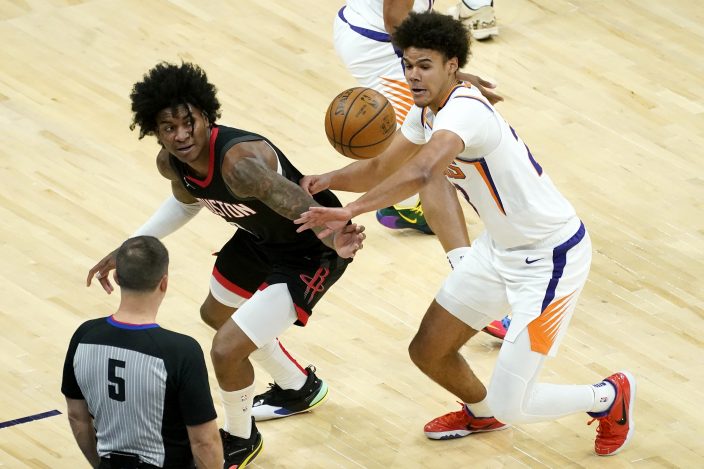 Suns: F Abdel Nader (knee soreness) missed his 12th straight game. ... This was the first season sweep for the Suns against the Rockets since the 2009-10 season. ... Deandre Ayton finished with 18 points. Chris Paul had 10 assists.