Matt Chapman homered among his three hits, Jed Lowrie added two hits and three RBIs, and the Oakland Athletics roughed up Madison Bumgarner in a 9-5 victory over the Arizona Diamondbacks on Monday night.

Lowrie doubled home two runs in the third inning and singled and scored in a three-run fifth capped by Chapman’s second homer of the season for a 6-2 lead.

Bumgarner (0-2) gave up seven hits and six runs in 4 2/3 innings, with five strikeouts and three walks. He was removed after hitting Sean Murphy with a pitch following Chapman’s solo homer. 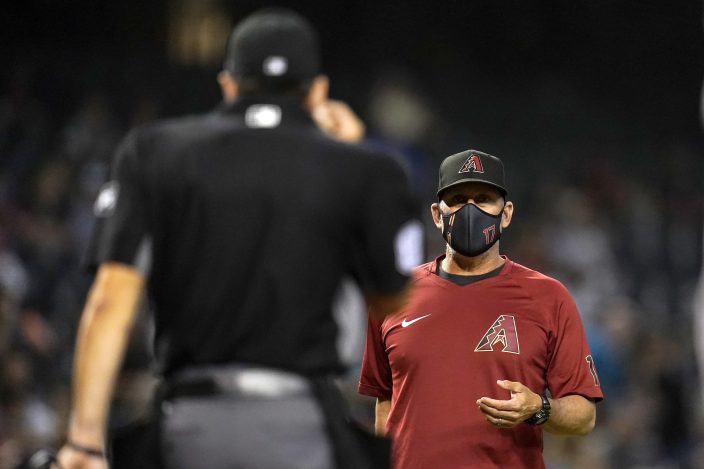 Bumgarner has allowed 22 hits and 12 walks in 13 2/3 innings this season, his latest struggles since signing an $85 million, five-year contract with Arizona as a free agent before last season. He was 1-4 with a 6.48 ERA in nine starts in 2020.

Ramon Laureano had two hits, two runs and two stolen bases for Oakland, which has won four of five after starting the season 0-6. Laureano leads the majors with seven stolen bases.

Arizona closed to 6-5 on run-scoring hits by Asdrubal Cabrera and David Peralta in the seventh inning before Oakland scored once in the eighth and twice in the ninth. 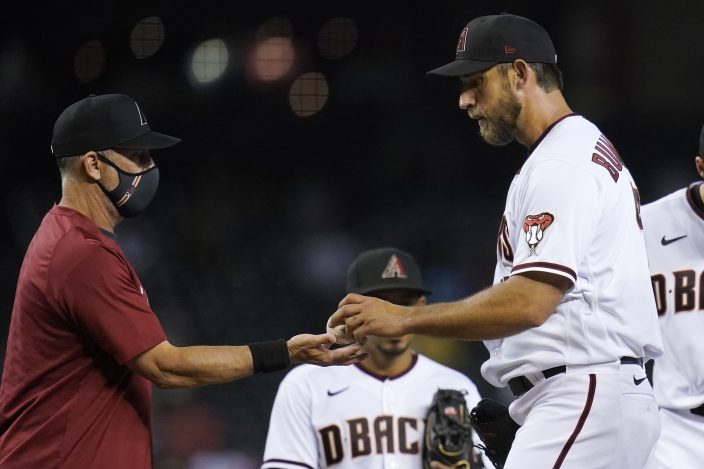 Arizona Diamondbacks starting pitcher Madison Bumgarner, right, hands the baseball over to manager Torey Lovullo as Bumgarner is taken out of the game during the fifth inning of a baseball game against the Oakland Athletics Monday, April 12, 2021, in Phoenix. (AP PhotoRoss D. Franklin)

Chapman drove in Lowrie with a ninth-inning single and scored on Murphy's double.

Oakland starter Chris Bassitt (1-2) gave up two hits and two runs in five innings, striking out four. Arizona loaded the bases with one out in the fifth on two of Bassitt’s five walks and a throwing error by first baseman Matt Olson, but Bassitt retired the side on a popup and a fly ball to preserve a 6-2 lead. 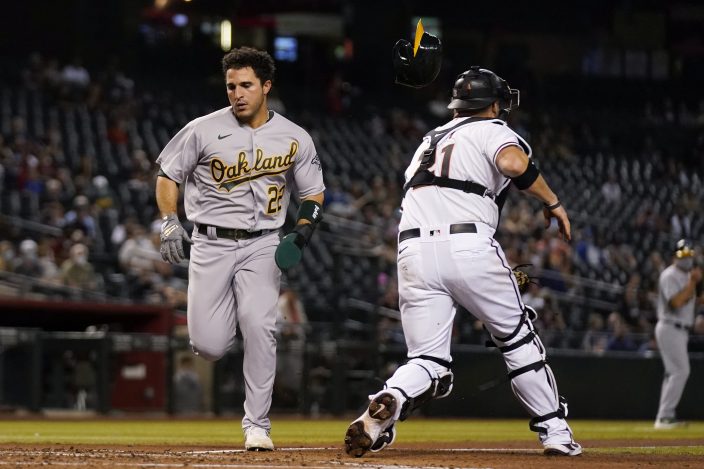 Athletics: Olson was hit by a pitch in the right arm in the seventh and replaced by Seth Brown in the bottom of the eighth. … DH/1B Mitch Moreland (hamstring) missed his third consecutive game.

Dbacks: 1B Christian Walker (strained right oblique) was placed on the injured list. INF Andrew Young was recalled to take Walker's roster spot. … OF Josh Reddick signed a minor league contract and is expected to report to the Diamondbacks’ training facility in Scottsdale. 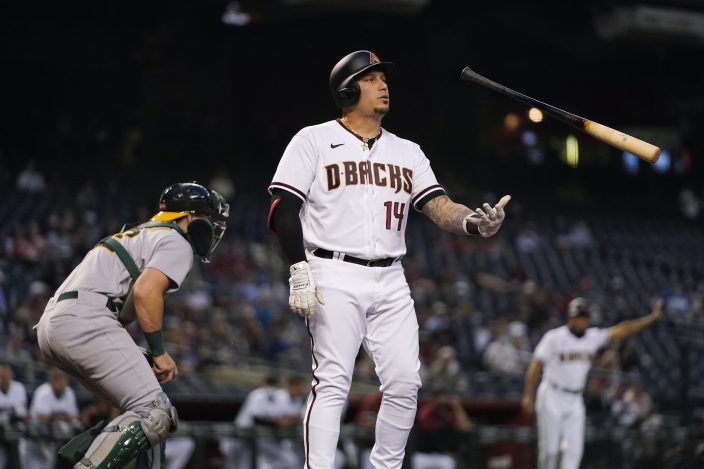 Arizona Diamondbacks' Asdrubal Cabrera (14) flips the bat in the air after striking out as Oakland Athletics catcher Sean Murphy checks the base runners during the first inning of a baseball game Monday, April 12, 2021, in Phoenix. (AP PhotoRoss D. Franklin)

Arizona right-hander Zac Gallen will be activated from the injured list for his 2021 debut Tuesday. Gallen has been out since sustaining a hairline fracture in his right forearm during batting practice in mid-March. He was the Diamondbacks’ most relatable starter last season, going 3-2 with a 2.75 ERA in 12 starts. Oakland left-hander Jesus Luzardo (0-1, 6.10) will make his third start of the season