LONDON — Britain says it has hit its target of giving at least one dose of vaccine to everyone over 50 and others in groups at highest risk from the coronavirus by mid-April.

The government says everyone in those groups has been offered a jab, and about 95% of eligible people have received a shot.

More than 32 million people, over 60% of adults, have had a first shot and almost 15% of people in the U.K. have had both doses. 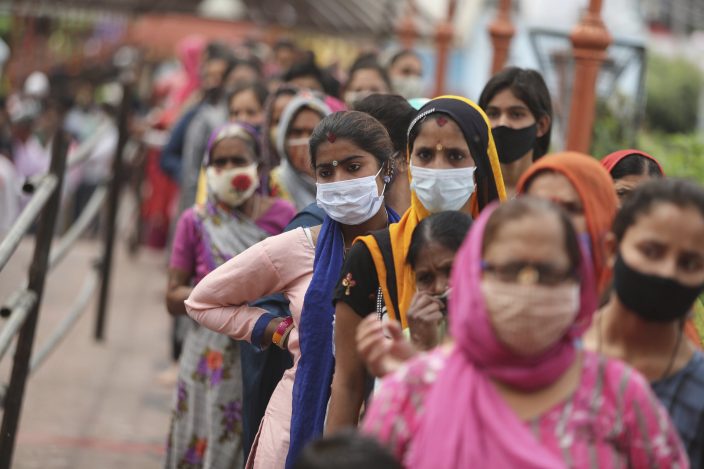 Hindu devotees wearing face masks as a precautionary measure against the coronavirus stand in a queue to offer prayers inside a temple dedicated to goddess Kali in Jammu, India, Tuesday, April 13, 2021. New infections have surged in the past month and India has now reported over 13.6 million cases — pushing its toll past Brazil, and making it second only to the United States. In the past 24 hours, over 160,000 new infections have been detected and experts fear that the worst is yet to come. (AP PhotoChanni Anand)

On Tuesday the vaccination drive was expanded to people aged 45-49, the start of the second phase of the inoculation campaign.

Britain has had Europe’s worst coronavirus outbreak, with more than 127,000 confirmed deaths. But rapid vaccination, and a nationwide lockdown have sharply decreased infections and deaths.

Lockdown restrictions are now being lifted, with nonessential shops, hairdressers, gyms and pub and restaurant patios reopening in England on Monday. 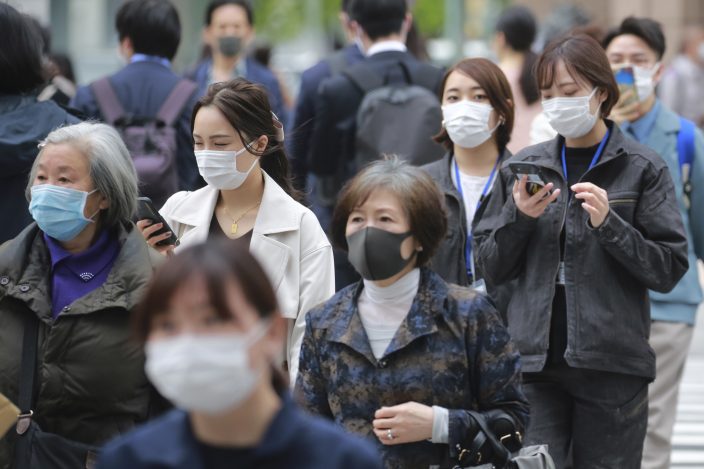 People wearing face masks to protect against the spread of the coronavirus walk on a street in Tokyo, Tuesday, April 13, 2021. (AP PhotoKoji Sasahara)

Health authorities are also concerned about new variants that are more resistant to the vaccines. They are calling for everyone living in two boroughs in south London to get tested after 44 cases of a strain first identified in South Africa were confirmed there. 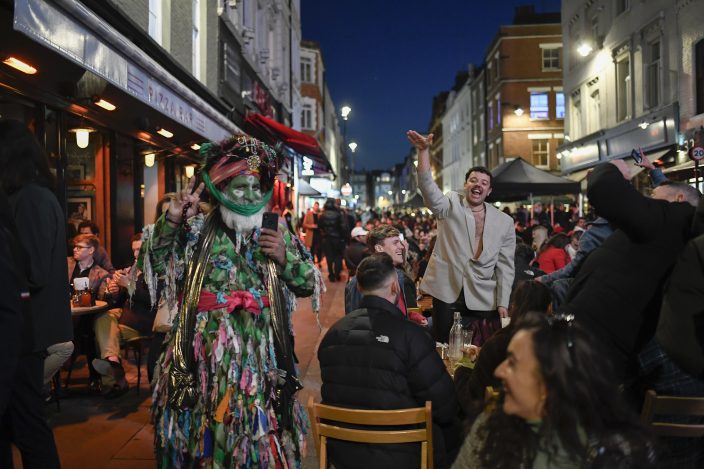 — Emptied by the pandemic, Canary Islands hotel offers shelter to migrants in need

COPENHAGEN, Denmark — Danish Health Minister Magnus Heunicke says 104,824 people were vaccinated in one day as Denmark Monday tested its system ahead of a June rollout where 400,000 will be vaccinated per day.

“The result is now being evaluated, so we are ready for continued effective rollout,” Heunicke wrote on Twitter Tuesday.

Stephanie Lose, head of the Danish Regions, an interest organization for Denmark’s five regions running health care across the country of nearly 6 million, noted that there were some local problems to be solved, including access, parking, logistics and some minor IT issues. In addition, queues occurred in several places because many showed up too early.

Denmark inoculated people in 68 vaccine centers. The number of jabs was lowered again on Tuesday.

GENEVA — The U.N. health agency is calling on countries to suspend the sale of live animals captured from the wild in food markets as an emergency measure, saying wild animals are a leading source of emerging infectious diseases like the coronavirus.

The World Health Organization issued new guidance on Tuesday saying that animals — particularly wild animals — “are the source of more than 70 percent of all emerging infectious diseases in humans, many of which are caused by novel viruses.”

The coronavirus’s origins more than a year ago have been the source of intense speculation, much of it centered around the likelihood that it was carried by bats and passed to humans through an intermediary species sold as food or medicine in traditional Chinese wet markets. The pandemic first appeared in the city of Wuhan, China.

ISLAMABAD, Pakistan — Pakistan’s President Arif Alvi appealed for people to adhere to social distancing rules after Islamabad reported one of its highest single-day totals of COVID-19 fatalities in recent months.

Alvi also said on Twitter he has recovered from his own case of COVID-19, but was still feeling weakness.

He urged people to continue adhering to social distancing rules after authorities said most people were still not wearing face masks at public place. Alvi’s appeal Tuesday came hours after Pakistan reported 118 deaths from the virus in the past 24 hours, the highest in recent months.

Pakistan has largely relied on donated or imported Chinese vaccines, which are only being offered to health workers and older people.

One pharmaceutical company has imported 50,000 doses of the Russian vaccine, which is available in big cities.

Pakistan hopes it will receive 15 million COVID-19 vaccine doses through the UN-backed COVAX program by next month, when authorities plan to register all citizens for vaccination.

And Secretary-General Antonio Guterres said in a report circulated Monday that combatants continued to use sexual violence “as a cruel tactic of war, terror, torture and political repression” in a number of countries.

The report focuses on 18 countries where the U.N. said it has obtained verified information.

It lists 52 parties “credibly suspected” of responsibility “for patterns of rape or other forms of sexual violence” in conflicts on the agenda of the U.N. Security Council.

The majority of those on the U.N. blacklist are “non-state actors” -- opposition, rebel or terrorist groups linked to the Islamic State or al-Qaida extremist groups. National military and police forces on the list, including Myanmar’s military and border guard, are barred from participating in U.N. peace operations until the adopt time-bound commitments to cease violations.

CANBERRA, Australia — The Australian government has decided against buying the single-dose Johnson & Johnson coronavirus vaccine to accelerate its immunization program.

Australia had planned to rely on Australian-manufactured AstraZeneca with the goal of delivering at least one dose of vaccine to all eligible adults among a population of 26 million by October. But the government announced last week that the Pfizer vaccine is now the preferred option for people under 50 because of a potential blood clotting risk from AstraZeneca.

Australia has reported two people in their 40s developed clots after receiving the vaccine.

TORONTO — All schools in Canada’s most populous province will be shut down and move to online learning because of a record number of coronavirus infections fueled by more contagious virus variants.

Ontario Premier Doug Ford says his government is moving schools to online-only after the April break this week.

Schools in Canada’s largest city of Toronto were already shut since last Wednesday. Now it will be province-wide.

Five more patients from the same mobile ICU in Bucharest's Victor Babes hospital were transferred to other hospitals to receive care.

An investigation has been opened as to why the ventilators failed.

In recent days, Romania has recorded its highest number of COVID-19 patients in ICUs since the pandemic began, which has put the Eastern European country’s strapped healthcare system under serious pressure.