German Chancellor Angela Merkel said Tuesday she will stay out of a battle in her center-right bloc over who should be its candidate to succeed her, while the two rival contenders prepared to take their case to lawmakers.

Armin Laschet, leader of Merkel's Christian Democratic Union, and Markus Soeder, the leader of its smaller Bavarian sister party, the Christian Social Union, officially threw their hats in the ring on Sunday after months of shadow-boxing.

Germany's parliamentary election on Sept. 26 will determine who succeeds Merkel, who isn't seeking a fifth term after nearly 16 years in power. 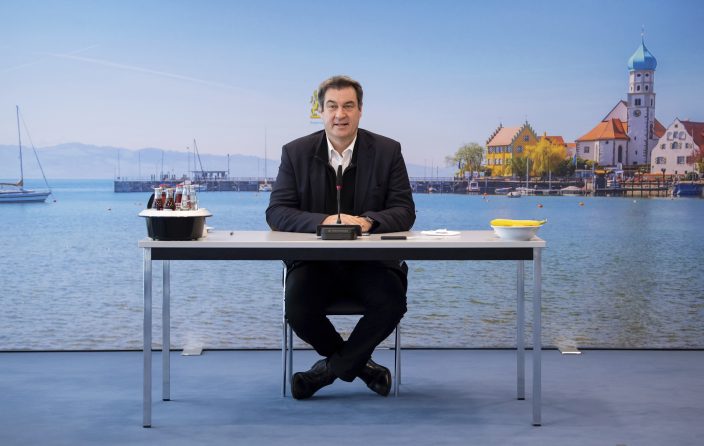 Markus Soeder, Prime Minister of Bavaria, sits in the video room in the State Chancellery before the start of a cabinet meeting in Munich, Germany, Tuesday, April 13, 2021. The meeting on the further development of the Corona situation in Bavaria took place as a video conference. (Sven Hoppedpa via AP)

Laschet and Soeder are the governors of Germany's two most populous states, North Rhine-Westphalia and Bavaria respectively. Soeder has much better poll ratings, but Laschet is the recently elected leader of by far the bigger party.

On Monday, Laschet rallied the CDU leadership behind his bid and called for a quick decision. But Soeder resisted pressure to resolve the matter immediately and said it needs to be discussed with people beyond senior party officials, pointing to his superior poll ratings.

Soeder hopes for support from CDU lawmakers who worry about their own chances of re-election. 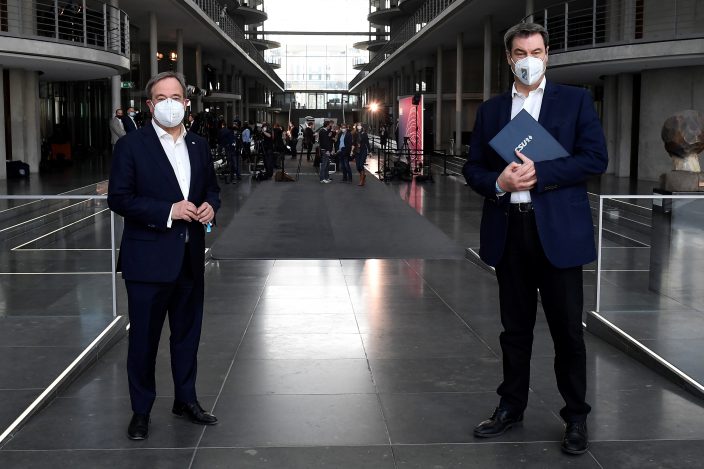 The chairman of the German Christian Democratic Party (CDU), ArminLaschet, left, and the chairman of the German Christian Social Union (CSU), Markus Soeder, right, after a statement folowing a closed meeting of the federal parliament factions of both partys in Berlin, Germany, Sunday, April 11, 2021. The two party chairmen and German state governors want to become the center-right candidate for the country's Sept. 26 national election, the German news agency dpa reported Sunday. (Tobias SchwarzPool Photo via AP)

Laschet and Soeder decided to attend a regular meeting Tuesday of the two parties' joint parliamentary group in Berlin, Germany's dpa news agency reported. It wasn't clear whether and how that would move things forward; while both men have vowed to reach an agreement on who should run, they haven't agreed on a procedure.

Merkel, asked Tuesday whether she was worried that the pair's rivalry could damage the Union bloc and even lead to it losing the chancellery, made clear that she has no intention of intervening.

“I wanted, want to and will stay out of it,” she said.