VIRUS OUTBREAK-BIDEN — The federal government’s recommended “pause” in administering the Johnson & Johnson COVID-19 vaccine over a one-in-a-million side effect is putting President Joe Biden’s commitment to “follow the science” under the microscope. The White House says the pause shows its commitment to transparency and ensuring the safety of the vaccines but there worries it could undermine public confidence in the vaccines just as Biden is trying to expand acceptance. By Zeke Miller. UPCOMING: 800 words by 5 p.m., photos, video. 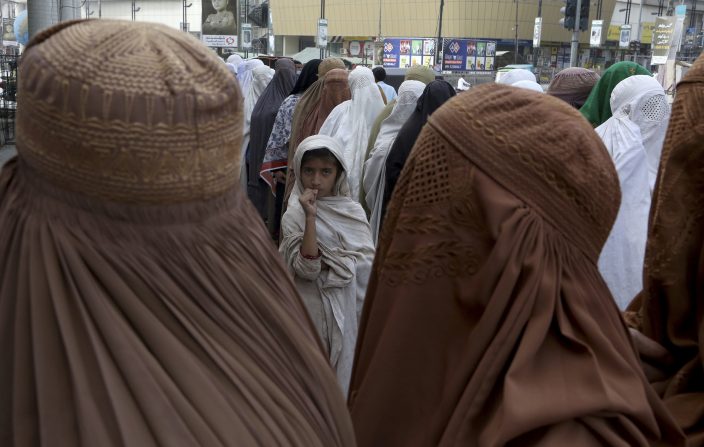 Women stand in line waiting their turn outside a government office to receive cash under the government's Ehsaas Emergency Cash program for families in need, ahead of the Muslim fasting month of Ramadan, in Peshawar, Pakistan, Tuesday, April 13, 2021. (AP PhotoMuhammad Sajjad)

POLICE SHOOTING-MINNESOTA — A white Minnesota police officer who fatally shot a Black man during a traffic stop in a Minneapolis suburb and the city’s chief of police have resigned. Officer Kim Potter and Police Chief Tim Gannon both resigned two days after the death of 20-year-old Daunte Wright in Brooklyn Center.. By Mohamed Ibrahim and Mike Householder. SENT: 1,180 words, photos, videos.

GEORGE-FLOYD-OFFICER-TRIAL — The defense began its case at the murder trial of former Officer Derek Chauvin, seizing on a 2019 confrontation between police and George Floyd in which Floyd suffered dangerously high blood pressure and confessed to heavy use of opioid painkillers. Chauvin lawyer Eric Nelson has argued that Floyd died last May because of his illegal drug use and underlying health problems, not because of Chauvin pinning him to the pavement. By Amy Forliti, Steve Karnowski and Tammy Webber. SENT: 830 words, photos. videos. With EXPLAINING GEORGE FLOYD-OFFICER TRIAL-EXCITED DELIRIUM — The controversial term “excited delirium” has surfaced again Derek Chauvin trial. UPCOMING: 500 words, photo by 3 p.m.; EXPLAINING FLOYD-OFFICER TRIAL-CHAUVIN ON STAND? — Will ex-officer on trial for Floyd death testify? SENT: 900 words, photos.

IRAN-NUCLEAR — Iran will begin enriching uranium up to 60% purity after an attack on its Natanz nuclear facility, a negotiator said, pushing its program to higher levels than ever before though still remaining short of weapons-grade. The announcement marks a significant escalation after the sabotage that damaged centrifuges, suspected of having been carried out by Israel — and could inspire a further response from Israel amid a long-running shadow war between the nations. By Jon Gambrell. SENT: 970 words, photos. With IRAN-NUCLEAR-ANALYSIS — The sabotage at Iran’s main nuclear enrichment facility is just the latest setback for the paramilitary Revolutionary Guard. SENT: 860 words, photos. 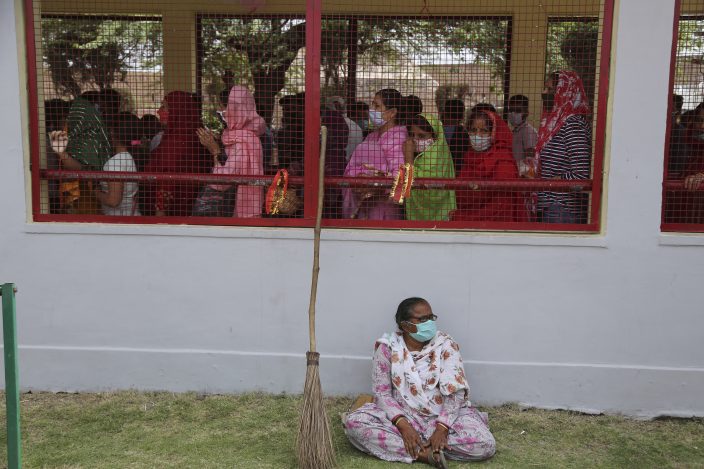 A sweeper take rest as devotees wearing face masks as a precautionary measure against the coronavirus stand in a queue to offer prayers inside a temple dedicated to goddess Kali in Jammu, India, Tuesday, April 13, 2021. New infections have surged in the past month and India has now reported over 13.6 million cases — pushing its toll past Brazil, and making it second only to the United States. In the past 24 hours, over 160,000 new infections have been detected and experts fear that the worst is yet to come. (AP PhotoChanni Anand)

UNITED STATES-AFGHANISTAN — President Joe Biden has decided to withdraw American troops from Afghanistan by Sept. 11, the 20th anniversary of the 9/11 attacks, missing a May 1 deadline negotiated by the Trump administration. His decision risks retaliation by the Taliban on U.S. and Afghan forces and is likely to reignite political division over America’s involvement in what many have called the endless war. By Lolita C. Baldor and Ellen Knickmeyer. SENT: 600 words, photos. UPCOMING: Developing, 890 words by 4:30 p.m. 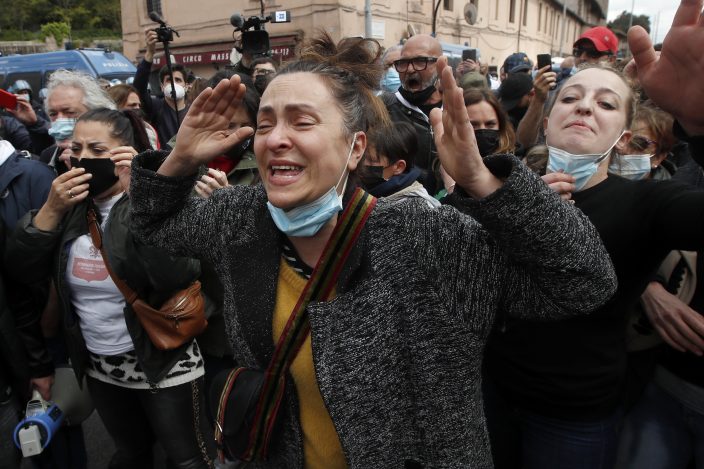 A demonstrator shouts during a protest against restriction measures to curb the spread of COVID-19, at the Circus Maximus in Rome, Tuesday, April 13, 2021. Angry restaurant and other owners of shuttered establishments have been protesting in Rome as frustration builds in business sectors over weeks of current pandemic lockdown measures. (AP PhotoAlessandra Tarantino)

VIRUS-OUTBREAK — India is experiencing its worst pandemic surge, with average daily infections exceeding 143,000 over the past week. The spike is particularly alarming because India is a major vaccine producer and a critical supplier to the U.N.-backed initiative that aims to help distribute shots fairly. SENT: 1,220 words, photos, graphic.

VIRUS-OUTBREAK-FRANCE — France suspended all flights from Brazil amid mounting fears over the particularly contagious coronavirus variant that has been sweeping the South American country. SENT: 360 words, photos.

VIRUS OUTBREAK-EVICTIONS — The Centers for Disease Control and Prevention recently extended its eviction moratorium through the end of June. The agency has said the policy helps stop the spread of the coronavirus by limiting the number of people who lose their housing and have to live in shared housing, homeless shelters or on the streets. Opponents say the ban is a constitutional overreach. SENT: 780 words, photo.

UN-VIRUS-OUTBREAK-SEXUAL VIOLENCE IN CONFLICTS — The COVID-19 pandemic led to a spike in gender-based violence last year and combatants continued to use sexual violence “as a cruel tactic of war” and political repression in a number of countries, the U.N. chief says. SENT: 680 words.

WORLDWIDE THREATS — The effects of the coronavirus pandemic are expected to contribute over the next year to “humanitarian and economic crises, political unrest, and geopolitical competition,” according to a new intelligence report that also warns about the threats from foreign adversaries as well as from violent extremists inside the United States. SENT: 570 words, photo.

VIRUS OUTBREAK-SIKH HOLIDAY — Sikhs across the United States are holding toned down Vaisakhi celebrations this week, joining people of other faiths in observing major holidays cautiously this spring as COVID-19 keeps an uneven hold on the country. UPCOMING: 680 words, photos BY 3 p.m.

VIRUS-OUTBREAK-BRAZIL-RIO-PANDEMIC-ARTISTS — Georgia Szpilman’s soprano voice resounds beautifully in the apartment’s small living room, though the space lacks the acoustics of where her choir used to sing — Rio de Janeiro’s majestic municipal theater, which has been closed for over a year because of the pandemic. Szpilman is one among many artists sidelined by the coronavirus in Brazil’s cultural capital. SENT: 480 words, photos.

CAPITOL LOCKDOWN-OFFICER KILLED — U.S. Capitol Police Officer William “Billy” Evans, killed in an attack at his Senate-side post, is lauded for his dedication to country, love for his job and for a mischievous sense of humor as President Joe Biden and congressional leaders pay tribute in the Rotunda as his casket rests in honor. SENT: 990 words, photos UPCOMING: Developing, 1,000 words photos, video by 5 p.m.

US TROOPS-GERMANY — Defense Secretary Lloyd Austin is expanding the U.S. military presence in Germany by 500 troops and has stopped planning for large-scale troop cuts ordered by the Trump administration. SENT: 620 words, photos.

RAMADAN — Muslims in many parts of the world marked the start of Ramadan, but a spike in coronavirus cases in several countries has once again put curbs on the holy month’s signature feasts and lengthy prayers in mosques. SENT: 1,080 words, photos.

ELECTRIC-CARS-LACKING-CHARGERS — In line with its ambition to make Europe a greener place, the European Union wants to drastically reduce gas emission from transport by 2050 and promote electric cars. But according to a report from the bloc’s external auditor, it is lacking the appropriate charging stations. SENT: 460 words, photos.

RUSSIA-NAVALNY — Imprisoned Russian opposition leader Alexei Navalny said Tuesday he was suing his prison for withholding the Quran, which he intended to study while serving time outside Moscow. SENT: 570 words, photo.

BRITAIN-PRINCE PHILIP-ARC OF THE CENTURY — Born into an age of revolutions, Prince Philip lived through a tumultuous century and witnessed many of its upheavals. SENT: 1,040 words, photos.

VOTING-RIGHTS-MICHIGAN — The leaders of three-dozen major Michigan-based companies, including General Motors and Ford, on Tuesday objected to Republican-sponsored election bills that would make it harder to vote in Michigan and other states. SENT: 660 words, photos.

2020-CENSUS — Sixteen other states are backing Alabama’s challenge to a statistical method the U.S. Census Bureau is using for the first time to protect the privacy of people who participated in the 2020 census, the nation’s once-a-decade head count that determines political power and funding. SENT: 500 words, photo.

TENNESSEE-SCHOOL-SHOOTING — A police officer wounded in a shooting at a Tennessee high school is a 20-year veteran of the force who worked at the school, authorities say. SENT: 540 words, photos.

REL-VATICAN-US-ABUSE — A Minnesota bishop who was investigated by the Vatican for allegedly interfering with past investigations into clergy sexual abuse has resigned. SENT: 320 words, photo.

CLIMATE CHANGE-BUSINESS — More than 300 businesses and investors, including such giants as Apple, Google, Microsoft and Coca-Cola, are calling on the Biden administration to set an ambitious climate change goal that would cut U.S. greenhouse gas emissions by at least 50% below 2005 levels by 2030. SENT: 590 words, photos.

SWITZERLAND-SCIENCE-DIPLOMACY — With COVID-19, space exploration and climate change high on many minds, a “do tank” in Geneva bankrolled by Switzerland’s government is gearing up to develop long-term projects like a global court for scientific disputes and a Manhattan Project-style effort to rid excess carbon from the atmosphere. SENT: 580 words.

POLL-PERSONAL-FINANCES — While most Americans have weathered the pandemic financially, about 38 million say they are worse off now than before the outbreak began in the U.S. Overall, 55% of Americans say their financial circumstances are about the same now as a year ago, and 30% say their finances have improved. That’s according to a new poll from Impact Genome and The Associated Press-NORC Center for Public Affairs Research. But 15% say they are worse off. SENT: 840 words, photos.

OSCARS-BORAT WRITERS — How does a largely improvised comedy get nominated for a screenwriting Oscar? For the nine writers credited for the script and story of “Borat Subsequent Moviefilm,” it was about being prepared for anything. They discuss the surreal process of writing -- and constantly rewriting -- for Borat. By Jake Coyle. UPCOMING: 900 words, photos.

An Arizona woman accused in the gr ...

Sassuolo forward Raspadori gets 1st call up to Italy ...