On one end of Pennsylvania Avenue, he mourned with the family of a fallen police officer. On the other, he pledged to help end the epidemic of Black men being killed by police.

Over the course of a few hours Tuesday, President Joe Biden’s difficult balancing act on policing was put on vivid display. He is urgently trying to navigate criminal justice and civil rights while the White House nervously watches unrest in Minnesota as the trial of the white police officer accused of killing George Floyd winds down.

The test for Biden comes as the nation is on edge awaiting the conclusion of the trial of Derek Chauvin, who prosecutors said killed Floyd, a Black man, last year by placing a knee on his neck for about nine minutes. Tensions have only been heightened by the shooting death this week of another Black man in Minnesota, Daunte Wright, who was killed after police said a white officer accidentally reached for her handgun instead of a taser. 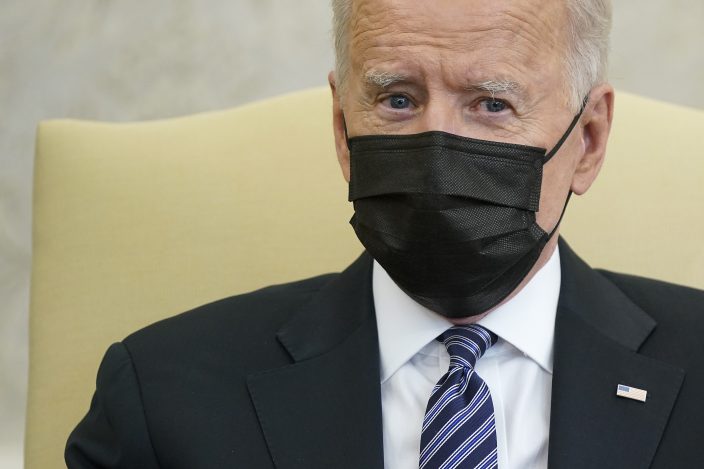 President Joe Biden speaks as he and Vice President Kamala Harris meet with members of the Congressional Black Caucus in the Oval Office of the White House, Tuesday, April 13, 2021, in Washington. (AP PhotoPatrick Semansky)

Biden has pledged to help combat racism in policing, helping African Americans who supported him in large numbers last year in the wake of protests that swept the nation after Floyd’s death and restarted a national conversation about race. But he also has long projected himself as an ally of police, including Tuesday, when he traveled to the U.S. Capitol to pay respects to William Evans, a Capitol police officer who was killed when a suspect rammed him with his car outside the citadel of democracy.

“I didn’t know Billy, but I knew Billy,” Biden said at a tearful memorial under the soaring rotunda. “I grew up with Billys in Claymont and Scranton, Pennsylvania. Billy was always the kid that you know if you got in a fight and you’re outnumbered three to one, he’d still jump in, knowing you’d both get beaten.”

Two of Evans’ children clutched stuffed animals as the gazed at their father’s flag-draped coffin, one wearing his father’s police uniform hat. At one moment, a toy replica of the U.S. Capitol was dropped; Biden reached over to pick it up. 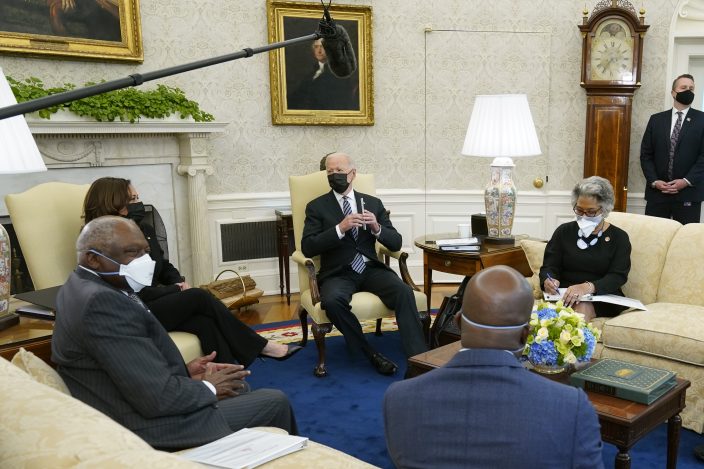 His own life defined by grief after having buried two children and his first wife, Biden said his prayer for the Evans family is for “that moment when a smile comes before the tear.” And he saluted the Capitol police force, still reeling from the Jan. 6 insurrection by supporters of President Donald Trump, where one officer died and scores more were injured.

“Never has there been more strain … and responsibility been placed on the shoulders of Capitol Police,” the president said. “And yet, you hear it, you see it, you watch them, and you watch them do their duty with pure courage and not complain.”

Hours later, Biden was in the Oval Office with members of the Congressional Black Congress to convene a meeting that was meant to tout the assistance that his jobs and infrastructure plan would give to Black communities but was shadowed by the police shootings. 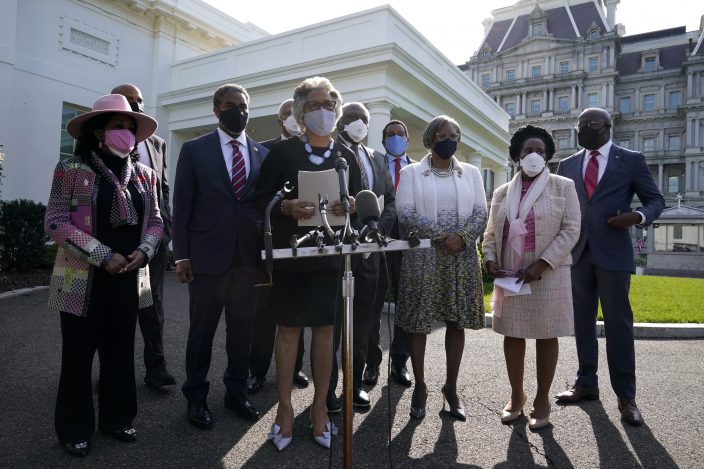 Acknowledging it has been “a painful week,” Biden denounced the killing of Wright as “a God-awful shooting” and said that “We’re in the business, all of us here today, of delivering real change” when it comes to policing communities of color. He promised he could do “a lot” when it comes to revamping how officers interact with African Americans during his time in office.

Rep. Joyce Beatty, D-Ohio, said after the meeting in a message to those hurt by the shootings that “we are standing here on the grounds of the White House because of them and for them.”

“We feel their pain because many of us have witnessed the same thing,” Beatty said, “the same discrimination, we know there is systemic racism, we know that we need to do better with enforcing police reform, gun reform, we’re asking them to stand with us as we stand with them.” 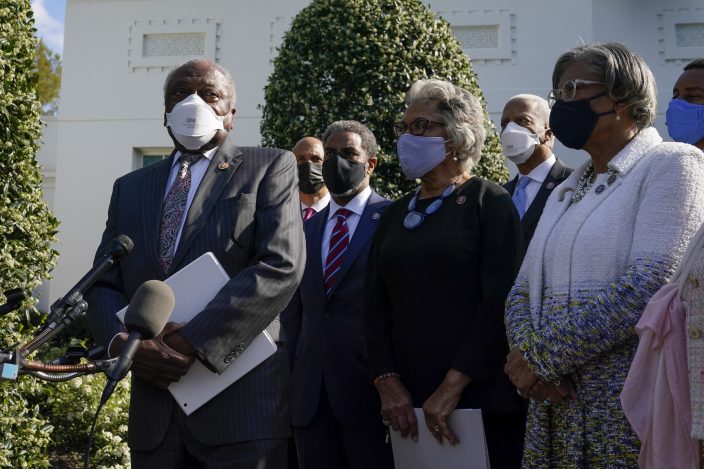 House Majority Whip James Clyburn, of S.C., left, speaks with members of the press alongside members of the Congressional Black Caucus after meeting with President Joe Biden and Vice President Kamala Harris at the White House, Tuesday, April 13, 2021, in Washington. (AP PhotoPatrick Semansky)

But so far, Biden's Department of Justice has been unable to do much.

Attorney General Merrick Garland has signaled that civil rights would be a top priority and that he was committed to combating racial discrimination in policing. During his confirmation hearing, he told lawmakers that America doesn’t “yet have equal justice.”

Advocates hope the department’s priorities will shift dramatically in the Biden administration, with a focus more on civil rights issues, criminal justice overhauls and policing policies in the wake of nationwide protests over the death of Black Americans at the hands of law enforcement.

Garland has also suggested he is more likely to authorize more so-called pattern or practice investigations, sweeping probes into police departments that examine whether systemic deficiencies contribute to misconduct or enable it to persist, which were curtailed under the Trump administration. But the job is not yet filled.

Although Biden announced Kristen Clarke, one of the nation’s foremost civil rights lawyers, to lead the department’s civil rights division at the same time he announced Garland’s nomination, she is not yet in her position. Her confirmation hearing is set for Wednesday before the Senate Judiciary Committee.

Clarke — who has garnered support from some of the nation’s largest law enforcement organizations, dozens of police chiefs and the families of hate crime victims — is expected to tell members of the Senate Judiciary Committee that she would bring a “clear-eyed pursuit of justice” to the position, if she is confirmed.

The Senate has also yet to vote to confirm Lisa Monaco as deputy attorney general and Vanita Gupta, who previously ran the Justice Department’s civil rights division, to be associate attorney general.

Administration officials have maintained a public silence but have kept tabs on the situation around Minneapolis, which has had two nights of unrest since the Wright killing. There are fears of more after the verdict in the Chauvin trial.