The roars returned to Masters. At least two of them.

There were enough spectators, believed to be roughly 8,000 a day, to at least bring some sound back to the gorgeous scenery of Augusta National in April. And they stood six-deep over the final 100 yards of the 18th green — masks on — as Hideki Matsuyama walked up the hill to a one-shot victory.

Missing was that head-turning volume, a brief burst of cheers that made spectators look around and try to figure out where it came from and what they were missing. 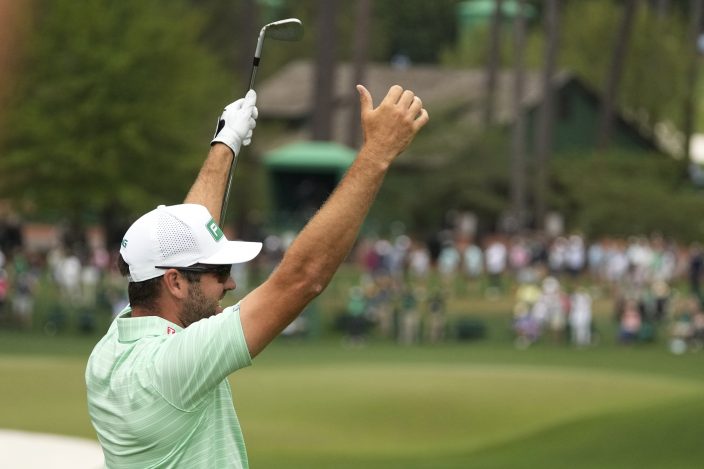 Corey Conners, of Canada, celebrates after a hole-in-one on the sixth hole during the third round of the Masters golf tournament on Saturday, April 10, 2021, in Augusta, Ga. (AP PhotoCharlie Riedel)

One of those roars was for Tommy Fleetwood making a hole-in-one on the 16th hole in the opening round. The loudest of the week was for Corey Conners making his ace on the sixth hole Saturday.

But it was progress, and that goes for the rest of golf.

Spectators in limited numbers returned this year at the Phoenix Open — compared with other years in Phoenix, that would be very limited — and have been a part of PGA Tour events ever since the tour left California. 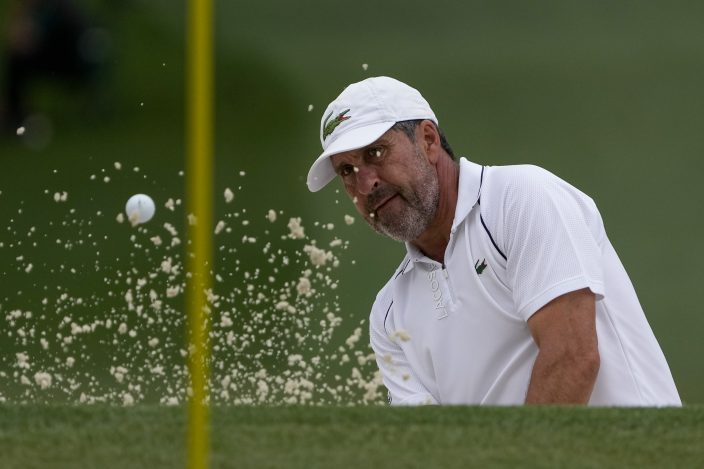 Jose Maria Olazabal, of Spain, hits out of a bunker on the seventh hole during the second round of the Masters golf tournament on Friday, April 9, 2021, in Augusta, Ga. (AP PhotoGregory Bull)

The next test is not so much who has spectators, but how many? And the most questions surround the Memorial in Dublin, Ohio, the first week in June.

The tournament posted on its website efforts to plan for “as safe of an experience as possible” and that it will decide while consulting with local and state governments and the tour.

The tournament said it has temporarily suspended badge sales to best manage the ticketing process. Fans are asked to sign up on a wait list and they will be contacted “should additional badges become available.” 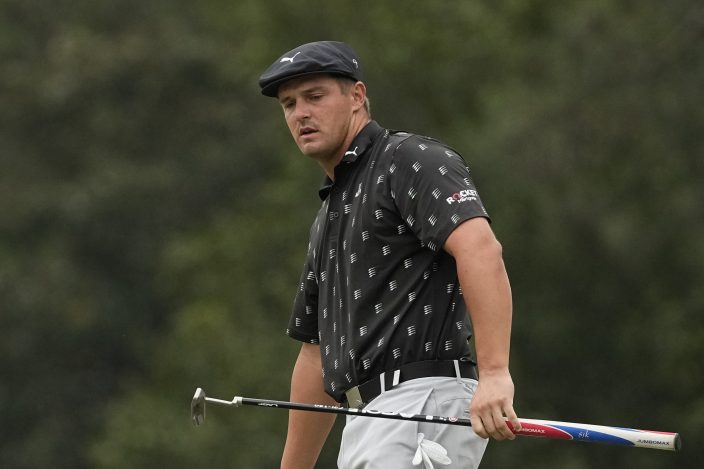 Bryson DeChambeau watches his putt on the seventh hole during the third round of the Masters golf tournament on Saturday, April 10, 2021, in Augusta, Ga. (AP PhotoCharlie Riedel)

The Memorial last year had a detailed plan for spectators that had been approved by the state until it was decided 10 days before the start of the tournament there would be none. A small grandstand by the 18th hole and some concession structures were still up during the tournament.

At least some spectators would be expected everywhere else on the upcoming tour schedule. The RBC Heritage this week has allowed 20% capacity at Hilton Head. 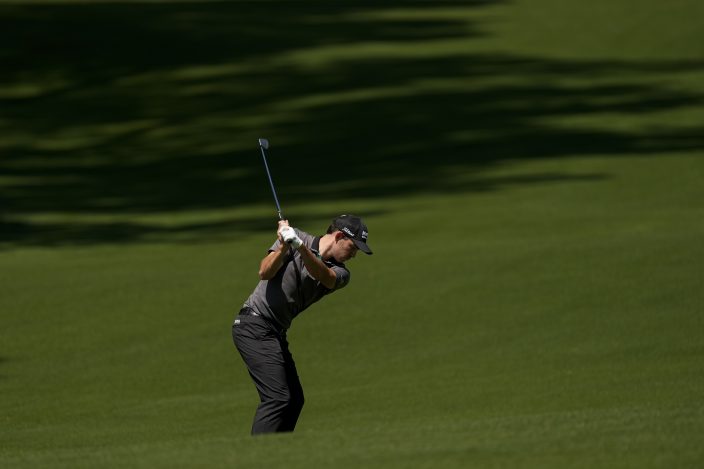 Patrick Cantlay hits from the fairway on the 13th hole during a practice round for the Masters golf tournament on Monday, April 5, 2021, in Augusta, Ga. (AP PhotoCharlie Riedel)

Colonial last year was the first event back from the pandemic. Hilton Head moved to June and the PGA Championship went from May to August. The rest of them between now and Memorial were canceled.

Hideki Matsuyama became only seventh player to go from winning a silver cup as low amateur at the Masters to a green jacket as the Masters champion.

And it leads to the question: Who's next?

There are three leading candidates, and that starts with Bryson DeChambeau because he already has a major (U.S. Open). DeChambeau tied for 21st as low amateur in 2016. He hasn't cracked the top 25 as a pro.

Two-time Masters champion Jose Maria Olazabal felt the best he has in years leaving Augusta National, not only because he made the cut in the Masters for the first time since in seven years but because of how he played.

Aside from a few poor shots in the final round, he was solid.

“It was pretty much the same all week long,” Olazabal said after a tie for 50th. “And in that regard, I take quite a few positive things from this week.”

Olazabal is playing the Chubb Classic on the PGA Tour Champions, his first start of the year on the senior circuit. He played only five times last year, primarily due to the pandemic.

“The idea is to play as much as possible on the Champions tour and see if I can somehow enjoy the game as I did this week,” he said.

Corey Conners was five shots out of the lead going into final round of the Masters until falling back early and closing with a 74. He had high hopes for Sunday and was disappointed by the bad start, having to shoot 34 on the back nine just to finish six shots back in a tie for eighth. He at least is assured of returning next year.

And then he learned something that lifted his spirits.

The local Tim Hortons store in his hometown of Listowel, Ontario, took the occasion of his hole-in-one on the sixth hole Saturday to make a special donut. It’s covered with green sprinkles with a powdered-sugar Timbit in the hole to symbolize the golf ball.

“That was pretty sweet,” Conners said. “Not something they normally do, so I was definitely pumped up about that. I wish I could access one of those right now, but I’m pretty far away from the closest Tim Hortons. Definitely pretty special moment when I saw what they had done.”

The PGA Tour season opener is staying at Silverado Resort in Napa, California, and will have a new name. Fortinet, which specializes in cybersecurity, has become title sponsor under a six-year deal. That starts with the Fortinet Championship on Sept. 16.

This is the third title sponsor since the tournament began at CordeValle in San Martin, California, in 2007.

The PGA Tour also announced the one-time event that replaces the Canadian Open this year will be promoted by the state of South Carolina and called the Palmetto Championship at Congaree. That will be June 10-13, one week before the U.S. Open.

Rickie Fowler is out of the top 100 in the world for the first time since February 2010. ... With his tie for 12th at the Masters, Stewart Cink became the 22nd player to surpass $40 million in career earnings on the PGA Tour. ... Of the 17 players who finished among the top 12 and ties at the Masters, 14 earned spots in the field next year. Only three were already eligible as Masters champions, major champions from the last five years or Players Championship winners from the last three years. ... The Australian PGA Championship, canceled last year because of the pandemic, returns to the schedule on Dec. 2-5 at Royal Queensland Golf Club in Brisbane. ... The U.S. Amateur Four-Ball Championship has been awarded to Philadelphia Cricket Club in 2024. It will be the first time the club hosts a USGA event since Alex Smith won the 1910 U.S. Open. It was supposed to host the Four-Ball last year until it was canceled by the pandemic.

For the the third straight year, No. 5 at Augusta National played as the toughest hole in the Masters. Over the previous 84 Masters, its cumulative rank was No. 5.

“My nerves really didn’t start on the second nine. It was right from the start today. Right to the very last putt.” — Masters champion Hideki Matsuyama.

Still 5 months away, Harry Higgs has the Masters on his mind