Charlie Coyle and Jake DeBrusk scored in Boston’s two chances in the shootout and the Bruins, with newcomer Taylor Hall, rebounded for a 3-2 victory over the Buffalo Sabres on Tuesday night.

Craig Smith and David Krejci scored in regulation for Boston, which had lost its last two games but improved to 4-2-1 in its last seven.

Jeremy Swayman made 21 saves for the Bruins and stopped Buffalo’s two shootout attempts. 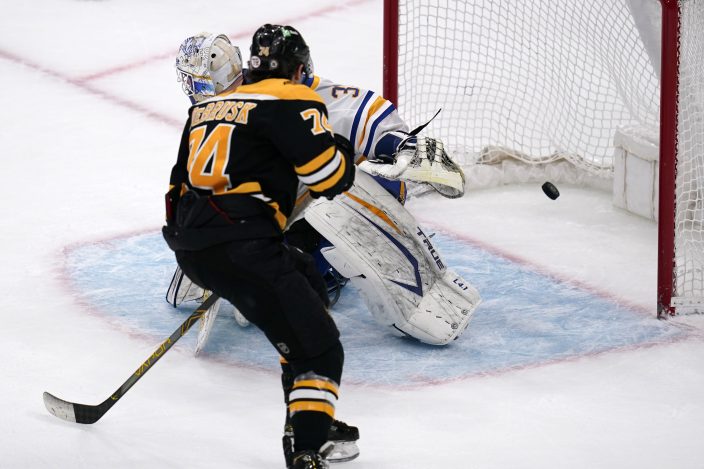 Colin Miller and Rasmus Dahlin each had a goal in regulation for the Sabres, who had won three of their last four. Dustin Tokarski made 32 saves.

Igor Shesterkin made 27 saves for his first NHL shutout and New York won the opener of a four-game series.

Mika Zibanejad and Artemi Panarin scored and Adam Fox had assists on both goals as New York improved to 10-4-3 since March 13. Pavel Buchnevich scored into an empty net with 28 seconds to play for the 20,000th goal in Rangers’ franchise history.

Mackenzie Blackwood had 17 saves as the young Devils fell to 2-7-2 in their last 11. Even the return of captain Nico Hischier from a broken nose that had sidelined him since Feb. 27 didn’t help.

Juuso Valimaki and Elias Lindholm also scored for the Flames. Gaudreau and Lindholm each added an assist, and Jacob Markstrom stopped 24 shots. Calgary won its second straight to pull six points behind Montreal for the fourth and final playoff spot in the North Division.

Zach Hyman had a goal and an assist, Alexander Kerfoot also scored and John Tavares had two assists for the Maple Leafs, who lead the North by three points over Winnipeg. David Rittich had 25 saves in his Toronto debut two days after being traded by the Flames.

Anthony Mantha had a two points in his Washington debut, Alex Ovechkin scored the 728th goal of his NHL career and the Capitals got their third consecutive victory.

Mantha picked up an assist on Tom Wilson’s goal in the first period, then showed off his shot in the second for his 12th of the season. Conor Sheary, Nicklas Backstrom and Carl Hagelin scored the other goals. Sheary added two assists for a three-point game. Ilya Samsonov made 29 saves for his 10th victory of the season.

Roman Josi had a goal and an assist in Nashville’s three-goal first period as the Predators got their fifth win in six games.

Josi also had an assist in the third. Viktor Arvidsson scored two goals and an assist, Rocco Grimaldi added a goal and an assist, and Tanner Jeannot and Mikael Granlund also scored. Ryan Johansen had two assists as Nashville salvaged a 2-6 mark in the season series.