Wilmer Flores' tiebreaking sacrifice fly in the seventh held up in a strange, back-and-forth game that featured four two-run homers in the first inning alone, and the San Francisco Giants beat the Cincinnati Reds 7-6 on Tuesday night.

Austin Slater put the Giants ahead on an RBI triple in the sixth following three home runs by San Francisco. That lead didn't last: Giants shortstop Brandon Crawford and second baseman Tommy La Stella collided trying to chase down pinch-hitter Alex Blandino’s fly in shallow center in the seventh, and the ball fell to the grass for a single as the Reds scored the tying run to make it 6-6.

The teams were tied at 4 after the first inning on a pair of two-run homers by each club. The only other time since at least 1974 that teams hit four two-run homers in the same inning was Sept. 18, 2004, when the Tigers and White Sox did so in the 10th inning, according to Sportradar. 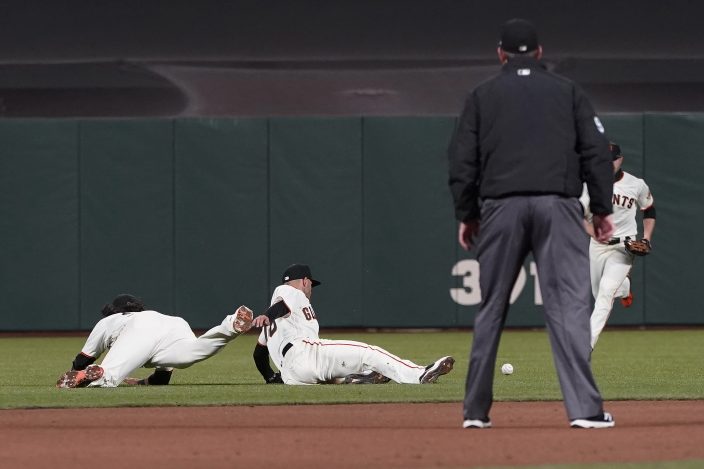 Joey Votto connected off former Reds right-hander Kevin Gausman — who was nearly hit by a flying bat from leadoff hitter Jesse Winker to start the game — for his second homer in two nights. Mike Moustakas then added his two-run homer, sending the drive into the water of McCovey Cove beyond the right field arcade to give Cincinnati a splash-hit homer for the second straight game.

Mike Yastrzemski and Brandon Crawford each hit two-run shots in the bottom half against Cincinnati ace Luis Castillo.

Nick Castellanos hit a go-ahead double in the second before Evan Longoria's solo homer in the sixth tied it at 5. 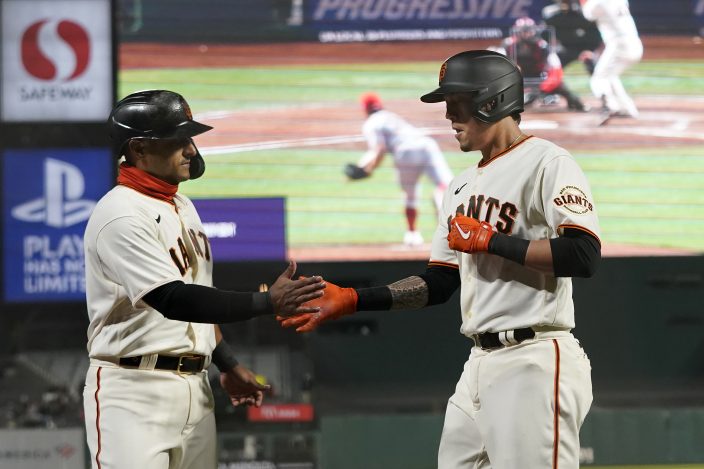 San Francisco Giants' Wilmer Flores, right, is congratulated by Donovan Solano after hitting a sacrifice fly that scored Solano during the seventh inning of the team's baseball game against the Cincinnati Reds in San Francisco, Tuesday, April 13, 2021. (AP PhotoJeff Chiu)

Cionel Pérez (1-1) walked the first two batters of the seventh before Flores came through against Lucas Sims.

Wandy Peralta (2-0) pitched the seventh for the win and Jake McGee finished for his fifth save.

The Giants pounded 11 hits a day after San Francisco got shut out for the second time this season and lost 3-0 to have its four-game winning streak snapped. 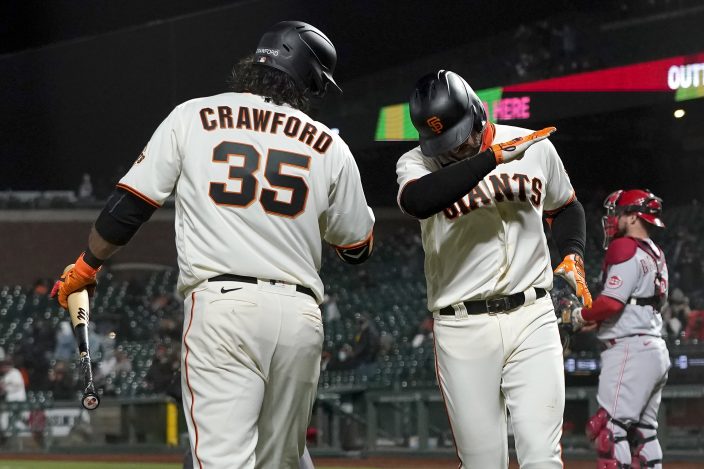 “Probably the most important measure is people’s comfort level in coming out to baseball games right now," manager Gabe Kapler said. "I think we have the expectation that people are just going to flock once we open up the doors, but I think there’s still a significant amount of trepidation and I think last night was an example of that.” 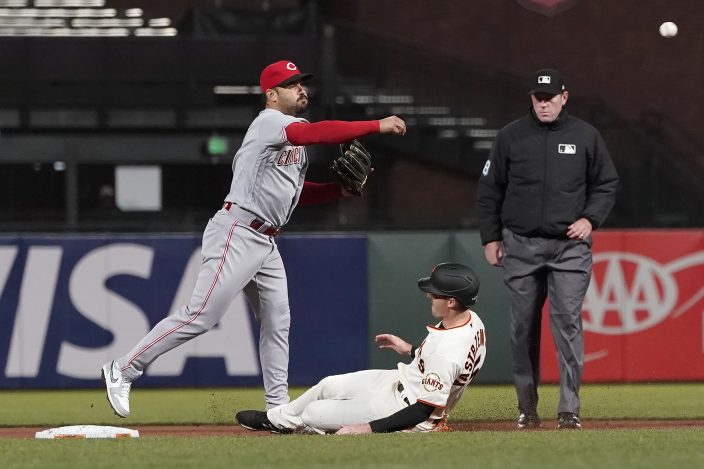 Cincinnati Reds shortstop Eugenio Suarez throws to first base after forcing out San Francisco Giants' Mike Yastrzemski at second base on a double play hit into by Alex Dickerson during the fifth inning of a baseball game in San Francisco, Tuesday, April 13, 2021. (AP PhotoJeff Chiu)

Reds: RHP Sonny Gray will start Friday or Saturday in his return from a mid-muscle strain in his back. He did fine in a simulated game Saturday. “He’s healthy and ready to go," manager David Bell said. ... Bell said RHP Tejay Antone, who struck out five over 3 2/3 hitless innings of relief Monday throwing 60 pitches, is unlikely to pitch again until Friday. ... Bell said he considered INF Eugenio Suárez fortunate not to suffer serious damage after being hit on a hand by a pitch from Aaron Sanchez during the fourth inning Monday. He stayed in the game, didn't need further tests and felt OK on Tuesday, Bell said.

Giants: RHP Tyler Beede, a top prospect selected in the first round of the 2014 draft who had Tommy John surgery in March 2020, “continues to play catch without any issues" and had a good bullpen session, manager Gabe Kapler said. ... RHP Reyes Moronta, placed on the injured list Sunday with a flexor strain in his pitching elbow, is undergoing treatment and won't throw for another three or four days. He missed all of last season recovering from right shoulder surgery in September 2019. ... LHP Alex Wood, rehabilitating a strained lower back, made a second start at the team's Sacramento alternate training site and the Giants are discussing when to bring him to the majors — still viewing him as a starter, with Kapler noting, "that's where we're leaning heavily." 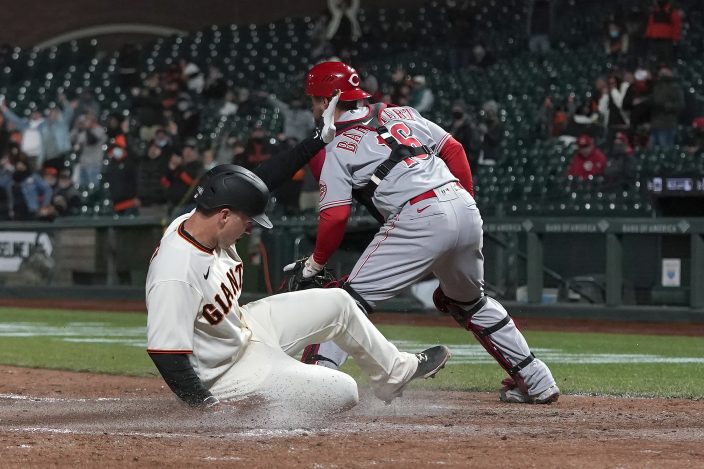 Cincinnati will face another one of its former pitchers when Johnny Cueto (1-0, 2.51 ERA) takes the mound for the Giants in the series finale Wednesday afternoon opposite Reds RHP Tyler Mahle (1-0, 2.00). Cueto got within one out of a complete game in San Francisco's home opener Friday against Colorado. 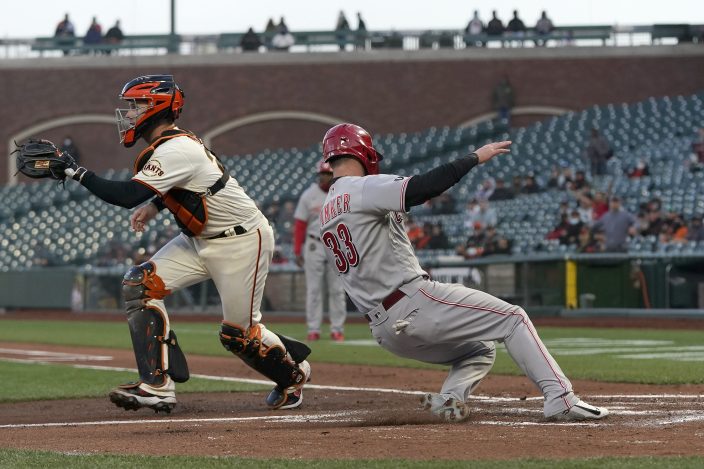 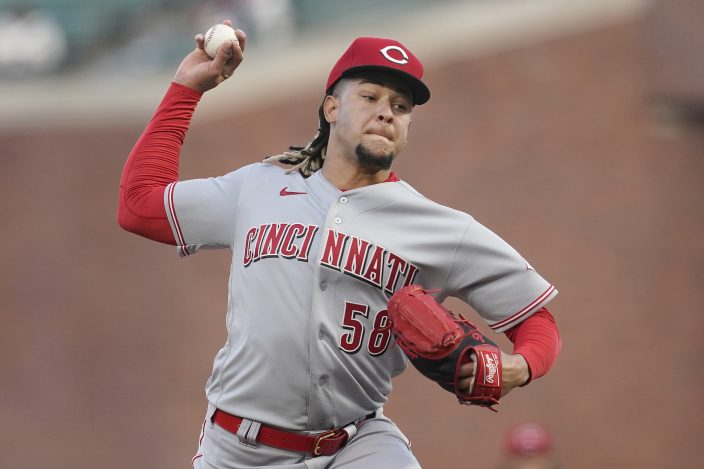 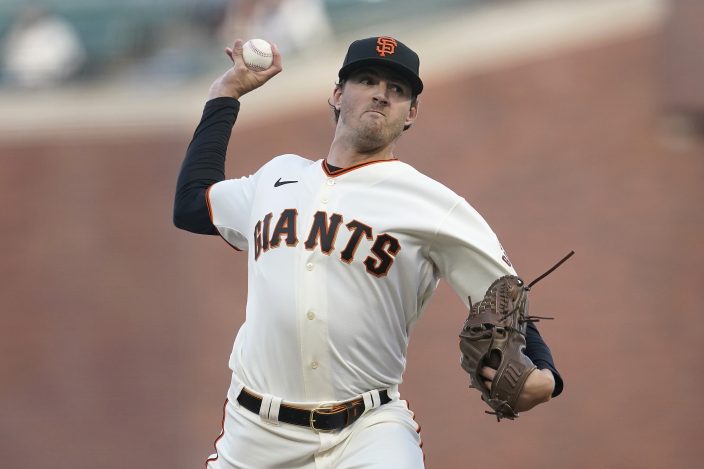