Just because the NHL can't release the Kraken until October doesn't mean Seattle wasn't in the mix at the trade deadline.

General manager Ron Francis can't finalize any transactions until ownership makes its final expansion payment to the league, but there's precedent for him making a handshake deal or two. That's what George McPhee did at the deadline four years ago with Pittsburgh, setting the table for goaltender Marc-Andre Fleury to be the face of the Vegas Golden Knights franchise.

If Francis made an arrangement with another team, he's not saying, though Seattle was tuned in to the moving and shaking at the deadline and the rest of the league had the Kraken in mind with the expansion draft coming up in July. 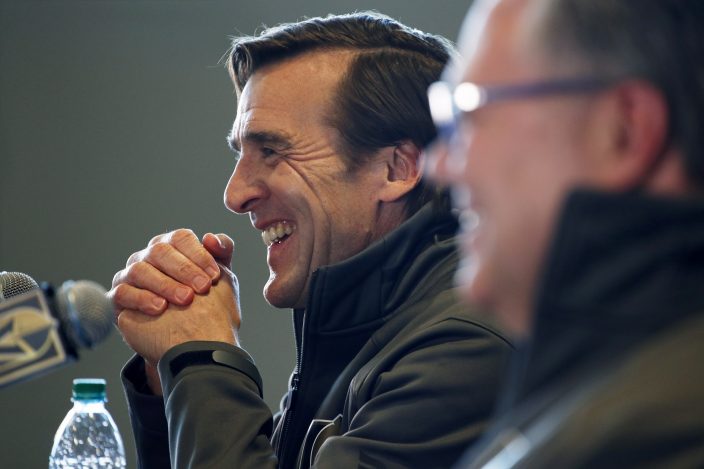 FILE - In this Thursday, May 2, 2019 file photo, George McPhee, left, president of hockey operations with the Las Vegas Golden Knights, speaks at a news conference with new general manager Kelly McCrimmon, right, Thursday, May 2, 2019, in Las Vegas. Four years since George McPhee was a “puppet master” of the NHL leading up to the Vegas expansion draft, general managers approached this trade deadline with Seattle’s upcoming addition to the league in mind. While Kraken GM Ron Francis prepares – and maybe made a handshake deal or two already like McPhee did – Seattle was on his colleagues’ minds. (AP PhotoJohn Locher, File)

“You always have the capability of having those discussions and reaching those agreements if both sides agree to it,” Francis said Tuesday, roughly 26 hours after the deadline. "We’re like everybody else on that trade deadline day: We’re watching it, we’re analyzing things. When trades happen, we’re updating our list and seeing how that affects (how) we were thinking on certain teams."

Francis said nothing at the deadline surprised him, and little directly affected Seattle because so few players signed beyond this season were traded. Maybe scratch off the available list defenseman Jonas Siegenthaler following a trade from Washington to New Jersey and forward Scott Laughton because he re-signed with Philadelphia, but there was nothing earthshattering.

“I think everyone was a little more conscious of what was coming up at the expansion draft,” Armstrong said. “When you’re looking at if you’re going to protect three defensemen, seven forwards, OK, if I acquire this player, what’s the acquisition price, and then am I going to be able to protect him and what’s it costing me on the other side?’”

The Flyers were willing to risk that with Laughton, so perhaps big forward James van Riemsdyk and his sizable contract are on the board for Seattle. After Vegas took very few high-dollar, long-term contracts, Francis won't share his philosophy other than to say he'll evaluate on a case-by-case basis.

He also knows his colleagues have a longer runway to this expansion draft than before Vegas to figure out how to minimize the talent left to be claimed. But they didn't think the salary cap would remain flat at $81.5 million for multiple seasons because of pandemic-related revenue losses, and the Kraken could seize on those opportunities.

One major positive for Seattle is it can better estimate which players they'll have a chance at than ever before now that the dust has settled on the trade deadline. There won't be much more movement until mid-July when protected lists have to be submitted and the drafting begins.

“We’ve already taken a look at where we think we were affected sort of positively or negatively and we’ll continue to look at that and evaluate as we move forward here and regroup as a whole and start preparing from here to July,” Francis said. “We can do a mock draft 12 months or six months ago, but until we get closer to that day and until we get to see that final list, it’s hard to project with 100% accuracy what we’re going to be picking from. But we’ll look at all the different scenarios we think might present themselves and be as best prepared as we possibly can.”

With roughly a month left in the regular season, 12 of the 16 playoff spots are all but wrapped up, with a handful of teams vying for the rest. That helped separate the buyers and sellers at the deadline, though many in the race stood pat.

Armstrong's Blues were quiet, thanks in large part to a three-game winning streak that put them in a playoff position in the West Division. Had they lost those three games, Armstrong could've been a seller.

“When we were thinking about being seller, we had a vision of, if we’re going to do something, what we wanted in return,” he said.

Instead, St. Louis is jockeying with Arizona and San Jose for a playoff berth. With the top four pretty much set in the East and North, the only other drama is between Nashville, Chicago and Dallas in the Central.

Why did the league split into well-defined classes this season? Washington general manager Brian MacLellan believes the condensed schedule and strict virus protocols have led to inconsistent play across the league.

The Florida Panthers visit the Tampa Bay Lightning for games Thursday and Saturday that could go a long way to determining who wins the Central Division.