States around the country are realizing what gamblers figured out long ago: The future of sports betting — and tax money to be made from it — is online.

But they're also realizing that extra tax money isn't nearly enough to turn seas of red ink into black. That was the case even before the coronavirus pandemic blew huge holes in state budgets.

Currently, 15 states plus Washington, D.C., offer mobile sports betting, and several others are considering adopting it. New York is poised to become one of the largest markets in the U.S., passing a budget last week that includes mobile sports wagering after years of opposition by Democratic Gov. Andrew Cuomo, who is expected to sign it. 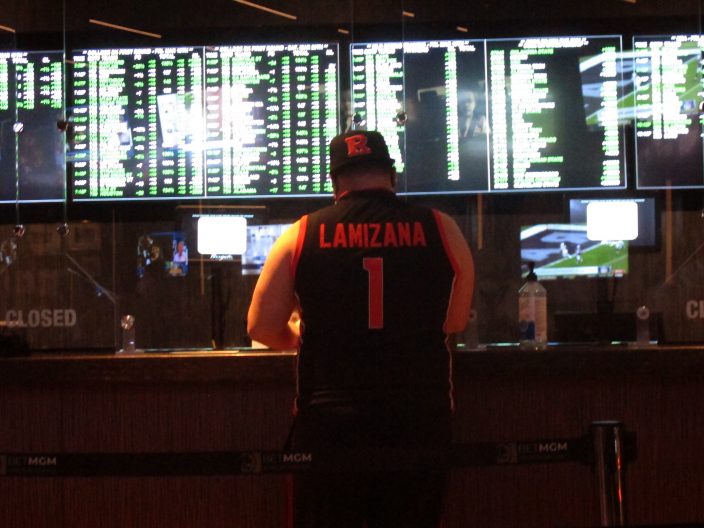 A man makes a sports bet at the Borgata casino in Atlantic City NJ on Friday March 19, 2021, the first full day of the NCAA March Madness tournament. Last year, it was March sadness as the NCAA college basketball tournament got canceled days before it was supposed to start, due to the coronavirus. (AP PhotoWayne Parry)

More than 80% of sports betting in the U.S. is done via smartphone or computer, and New York lawmakers grew tired of watching residents drive, take trains or even ride bicycles across the Hudson River into New Jersey to make sports bets — money that went to New Jersey's casino and tax coffers instead of their own.

“New Jersey in January did $83 million in revenue; New York, which had its highest month ever in history, did $3 million,” said New York Sen. Joseph Addabbo Jr., who added that 25% of New Jersey's sports betting business comes from New Yorkers. “The disparity between the states that have mobile sports betting and those that don’t is as wide as the Grand Canyon. How much longer can you sit back and watch money just flow out of your state into another state?”

Important details remain to be worked out on exactly how mobile sports betting would work in New York, and it could be 2022 — Super Bowl Sunday is an oft-mentioned target — before its residents can actually make bets online.

In 2019, a panel of experts predicted that 90% of sports betting in the United States will be done over mobile phones or the internet in the next five to 10 years.

But two years later, we're almost there already: Nationwide, 81% of sports bets are made online, according to the American Gaming Association. For the first two months of 2021, that figure rose to 85%. In New Jersey, the largest sports betting market in the nation, 92% of bets last year were made online.

Mattias Stetz, the chief operating officer of Rush Street Interactive, which operates BetRivers.com and PlaySugarHouse.com in Pennsylvania, said 87% of his company's sports betting is done via mobile devices in markets where both online and in-person are available.

“It is clear from the numbers that mobile and online sports betting is very important to the overall sports betting industry,” he said. “Sports fans are enjoying the option of betting from the comfort of their homes.”

It's also long been clear that tax money from sports betting, while a welcome addition under the “something is better than nothing” doctrine, is not a panacea for cash-strapped states.

Michigan launched online sports betting in late January and handled nearly $302 million in wagers in February, the quickest that any state had reached that level of betting action. That led Richard Kalm, executive director of the state's Gaming Control Board, to say “We've been drinking from a fire hose” in terms of dealing with a surge of gambling money.

But the sportsbooks kept just $9.5 million of that and paid $142,240 in taxes on it. Sports betting in Michigan is taxed at 8.4%, lower than in numerous other states, at least two of which keep 50% or more of total sports betting revenue.

The National Conference of State Legislatures, in a report last month, acknowledged the gap between the seemingly vast amount of money being wagered and the much smaller amount of it flowing to states as tax revenue. The average sportsbook keeps about 7.2% of the bets it handles; taxes are assessed on that amount, not on the much larger total amount of money wagered.

"Still, the potential revenue has been a big selling point for legalizing sports betting in many states," the conference wrote in its report. “From that perspective, mobile options appears likely to increase."

But, it added, “States looking to close budget gaps with sports betting revenue may be disappointed, especially as more and more states legalize and take their slice of the market.”

New Jersey saw more than $6 billion wagered last year alone. Yet its cut of that was $50 million, just a fraction of 1% of the state's $40 billion budget.

In Pennsylvania, about three-quarters of the $38.7 million in state tax revenue that came from sports betting was due to mobile bets in fiscal year 2020. Its state budget was over $36 billion.