A study of the public's attitude toward the press reveals that distrust goes deeper than partisanship and down to how journalists define their very mission.

In short: Americans want more than a watchdog.

The study, released Wednesday by the Media Insight Project, a collaboration between the American Press Institute and The Associated Press-NORC Center for Public Affairs Research, suggests ways that news organizations can reach people they may be turning off now. 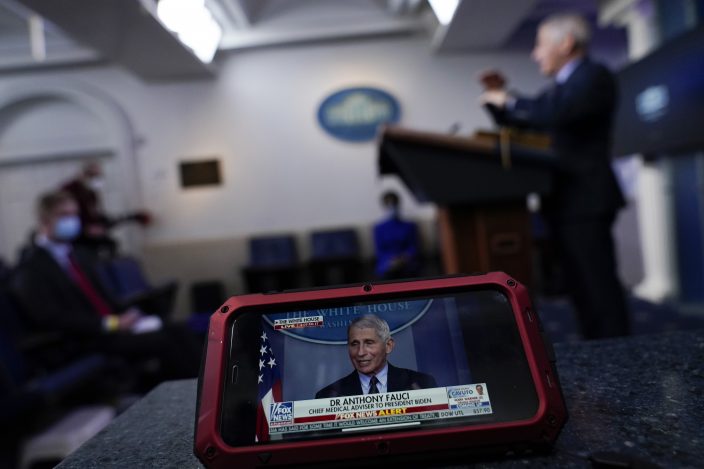 FILE - In this Jan. 21, 2021, file photo A screen displays Dr. Anthony Fauci, director of the National Institute of Allergy and Infectious Diseases, as he speaks with reporters as he speaks in the James Brady Press Briefing Room at the White House in Washington. A new study of people's attitudes toward the press finds that distrust goes deeper than just partisanship and down to how journalists define their mission. Americans want their journalists to be more than watchdogs. (AP PhotoAlex Brandon, File)

“In some ways, this study suggests that our job is broader and bigger than we've defined it,” said Tom Rosenstiel, executive director of the American Press Institute.

The study defines five core principles or beliefs that drive most journalists: keep watch on public officials and the powerful; amplify voices that often go unheard; society works better with information out in the open; the more facts people have the closer they will get to the truth; and it's necessary to spotlight a community's problems to solve them.

Yet the survey, which asked non-journalists a series of questions designed to measure support for each of those ideas, found unqualified majority support for only one of them. Two-thirds of those surveyed fully supported the fact-finding mission. 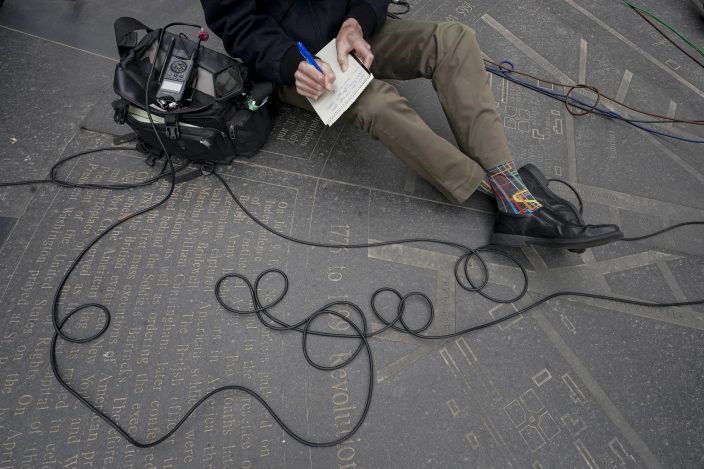 FILE - In this March 24, 2021, file photo WCBS Newsradio 880 reporter Peter Haskell wears New York subway map themed socks while taking notes during a news conference in New York. A new study of people's attitudes toward the press finds that distrust goes deeper than just partisanship and down to how journalists define their mission. Americans want their journalists to be more than watchdogs. (AP PhotoMary Altaffer, File)

Half of the public embraced the principle that it's important for the media to give a voice to the less powerful, according to the survey, and slightly less than half fully supported the roles of oversight and promoting transparency.

Less than a third of the respondents agreed completely with the idea that it's important to aggressively point out problems. Only 11% of the public, most of them liberals, offered full support to all five ideas.

“I do believe they should be a watchdog on the government, but I don't think they should lean either way,” said Annabell Hawkins, 41, a stay-at-home mother from Lawton, Oklahoma. “When I grew up watching the news it seemed pretty neutral. You'd get either side. But now it doesn't seem like that.” 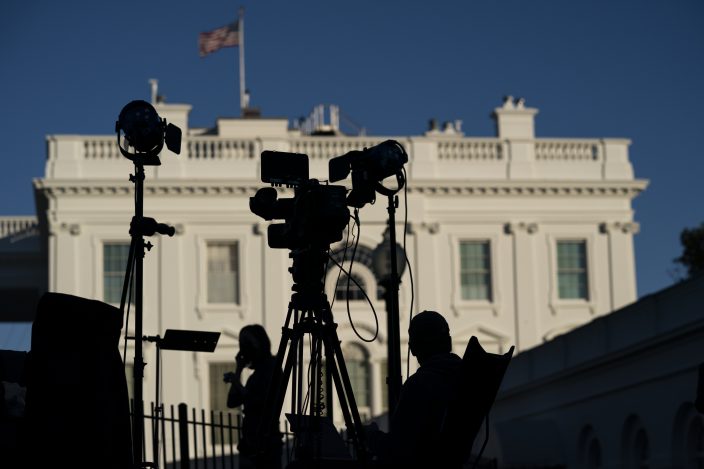 FILE - In this Nov. 4, 2020, file photo journalists gather outside the White House in Washington. A new study of people's attitudes toward the press finds that distrust goes deeper than just partisanship and down to how journalists define their mission. Americans want their journalists to be more than watchdogs. (AP PhotoEvan Vucci, File)

Hawkins said she believed the news media spent far too much time criticizing former President Donald Trump and rarely gave him credit for anything good he did while in office.

“I just want the facts about what happened so I can make up my own mind,” said Patrick Gideons, a 64-year-old former petroleum industry supervisor who lives south of Houston. He lacks faith in the news media because he believes it offers too much opinion.

Gideons, though, said he gets most of his news through social media, which is skilled in directing followers toward beliefs they are comfortable with. He said he knows only one person who subscribes to a newspaper anymore — his 91-year-old father.

Polls show how the public’s attitude toward the press has soured over the past 50 years and, in this century, how it has become much more partisan. In 2000, a Gallup poll found 53% of Democrats said they trusted the media, compared with 47% of Republicans. In the last full year of the Trump presidency, Gallup found trust went up to 73% among Democrats and plunged to 10% among Republicans.

The survey's findings point to some ways news organizations can combat the negativity.

Half a century ago, when newspapers were flourishing and before the internet and cable television led to an explosion in opinionated news, the public's view of the role of journalists was more compatible to how journalists viewed the job themselves, Rosenstiel said.

“We were the tough guys, we were the cops,” he said.

The study indicates now that consumers are interested in news that highlights potential solutions to problems and want to hear about things that are working, he said.

“We tend to think that stories that celebrate the good things in society are soft stories, kind of wimpy,” he said. “But they may be more important than we think in providing a full and accurate picture of the world.”

People who put greater emphasis on loyalty and authority tend to be more skeptical of the core values that journalists try to uphold, as opposed to those who give greater weight to fairness, the study found. Changes in the way a story is framed can make it more widely appealing to different audiences.

In one example, researchers took a story about a canceled recreation center project in a low-income neighborhood and emphasized the element, less prominent in the original story, that the parks director had diverted funds designated for the project by the city's mayor. The change led to the story being seen as more trusted and appealing by a broader set of the public, especially those made who place value in authority.

The nationwide survey was conducted with 2,727 adults in the fall of 2019, with a second set of interviews done last August with 1,155 people who had completed the first survey.

The study found that majorities of Americans believe that the media doesn't care about them and tries to cover up its mistakes. Despite the negativity, Rosenstiel said he believes there's room for both sides to come to a better understanding of each other.

Believe it or not, most journalists are pretty sincere, said Rosenstiel, a former reporter for the Los Angeles Times and Newsweek.

“Regular people should note that when journalists say they are just doing their job, they actually mean that,” he said, “because they define their job a certain way. They're not lying. They really don't think of themselves as secret agents of the Democratic Party. They have these set of principles that they think they're upholding.”