In a sign of confidence in a company that has been a mainstay of Europe's vaccination drive so far, von der Leyen said the EU will start negotiating to buy 1.8 billion doses of the Pfizer-BioNTech vaccine through 2023.

Von der Leyen expressed full confidence in the technology used for the Pfizer-BioNTech vaccine, which is different from the technology behind the Oxford-AstraZeneca vaccine. 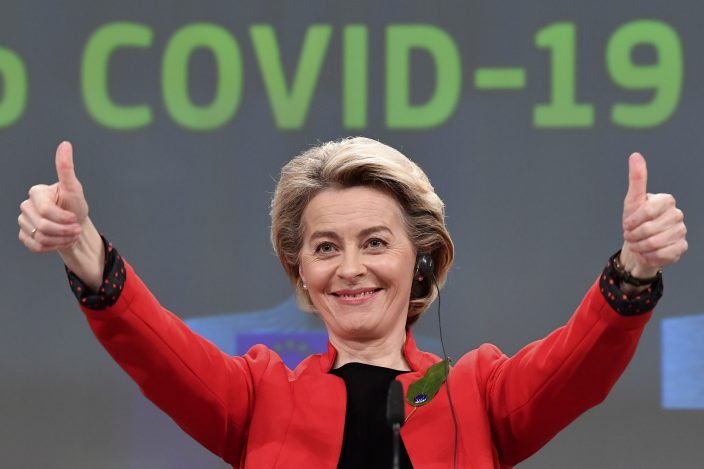 FILE - In this March 17, 2021, file photo, European Commission President Ursula von der Leyen gestures after participating in a media conference on the Commissions response to COVID-19 at EU headquarters in Brussels. COVID-19 has wrought division in the European Union. At the EU level, there has been no serious call for the ouster von der Leyen, despite her acknowledgment that serious mistakes were made. (John Thys, Pool via AP, File)

“We need to focus on the technologies that have proven their worth,” von der Leyen said.

Pfizer-BioNTech plans to provide the EU with an extra 50 million dozes in the 2nd quarter of this year, on top of 200 million doses already earmarked for the bloc. The deliveries will be especially welcomed by the EU's 27 member nations considering supply delays and concerns over rare blood clots potentially linked to the Oxford-AstraZeneca vaccine.

Denmark decided Wednesday not to resume use of AstraZeneca COVID-19 vaccine after putting it on hold last month following reports of rare blood clots in some recipients. The bulk of the shots given in the Scandinavian country so far have been the Pfizer-BioNTech vaccine.

The European Commission currently has a portfolio of 2.3 billion doses from a half dozen companies and is negotiating more contracts.

The planned negotiations with Pfizer left in the middle what the EU would do about any new contracts with AstraZeneca, which has had massive delivery problems during the first quarter and expects to send far fewer vaccines than its contract with the EU called for during the second quarter.

The European Commission said in a statement, “We keep all options open to be prepared for the next stages of the pandemic, for 2022 and beyond. We can, however, not comment on contractual issues.”

Von der Leyen, however, showed her full support for Pfizer-BioNTech, with the announcement for the massive order.