The stranger’s call came when Dianne Green needed it most.

Alone in the home where she’d raised four kids, grieving recently deceased relatives, too fearful of COVID-19 to see her grandkids and great-grandbabies, she had never felt lonelier.

Then, one day last spring, her cell phone lit up. 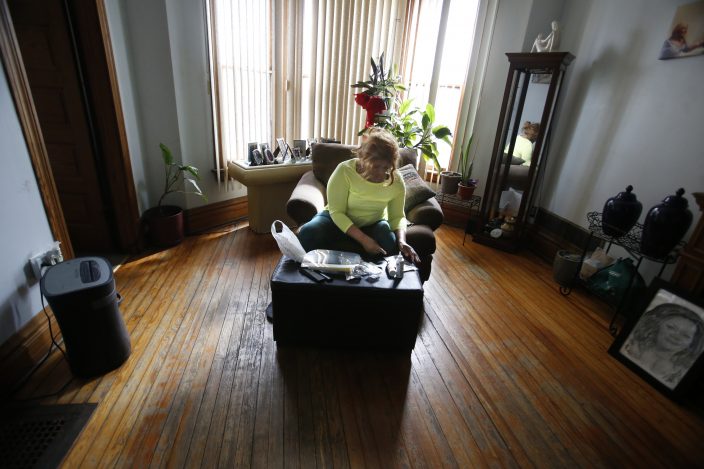 Dianne Green works on an art project in her home in Chicago on Wednesday, March 24, 2021. The retiree, cancer survivor and mother credits a "friendly caller" from Rush University Medical Center with pulling her out of the depths of despair. (AP PhotoMartha Irvine)

The cheerful voice on the line was Janine Blezien, a nurse from a Chicago hospital’s “friendly caller” program, created during the pandemic to help lonely seniors cope with isolation. Blezien, 57, lives with her rescue dogs, Gordy and Kasey, in a suburban brick bungalow, just six miles from Green’s two-flat apartment in the city.

“She wasn’t scripted. She seemed like she was genuinely caring,” said Green, 68, a retired dispatcher for the city’s water department. The two women started talking often and became friends without ever setting eyes on each other.

“I called her my angel.” 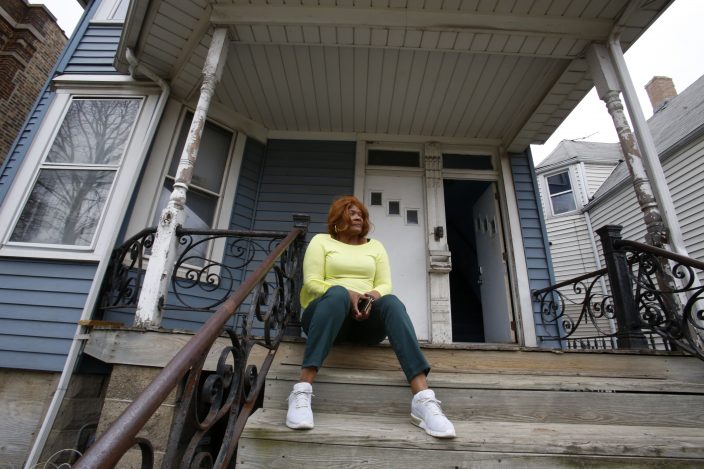 Dianne Green sits on the porch of her home in Chicago on Wednesday, March 24, 2021. The retiree, cancer survivor and mother worked for the city of Chicago in the water department and has lived in this home in Chicago's Austin neighborhood for years. (AP PhotoMartha Irvine)

Rampant loneliness existed long before COVID-19, and experts believe it's now worse. Evidence suggests it can damage health and shorten lives as much as obesity and smoking. In addition to psychological distress, some studies suggest loneliness may cause physical changes including inflammation and elevated stress hormones that may tighten blood vessels and increase blood pressure.

Yet loneliness as a public health issue “has kind of been swept under the rug,” said Dr. Ada Stewart, president of the American Association of Family Physicians. There’s no formal medical diagnosis and no mandate to screen for it.

“Now the pandemic has unveiled it,” Stewart said. “This is real.” 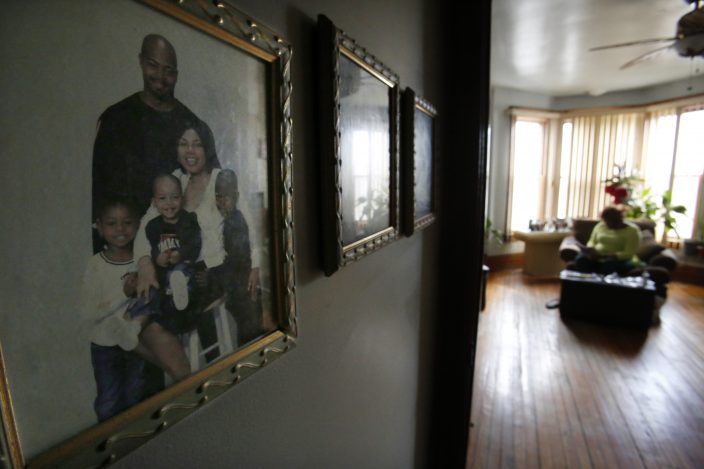 With family photos seen in the foreground, Dianne Green works on an art project in her home in Chicago on Wednesday, March 24, 2021. Green, a retiree and cancer survivor, said she struggled with loneliness after several family members died in 2019 and early 2020. Then the pandemic hit. Even before the lockdowns, a survey found that 61 percent of American adults said they were lonely. A year of added isolation highlighted a problem that health officials say is as harmful as obesity and smoking. (AP PhotoMartha Irvine)

Just a month before a global pandemic was declared, a National Academies report showed that one-third of U.S. adults aged 45 and up were lonely. Surveys have surprisingly found higher rates in younger adults.

A British online survey in 2018 of more than 55,000 people in 237 countries found that loneliness affected 40% of young adults, compared with 27% in those older than 75. Rates were highest in countries including the United States that prize individual success over collectivism.

The true impact from the pandemic is yet to be seen. 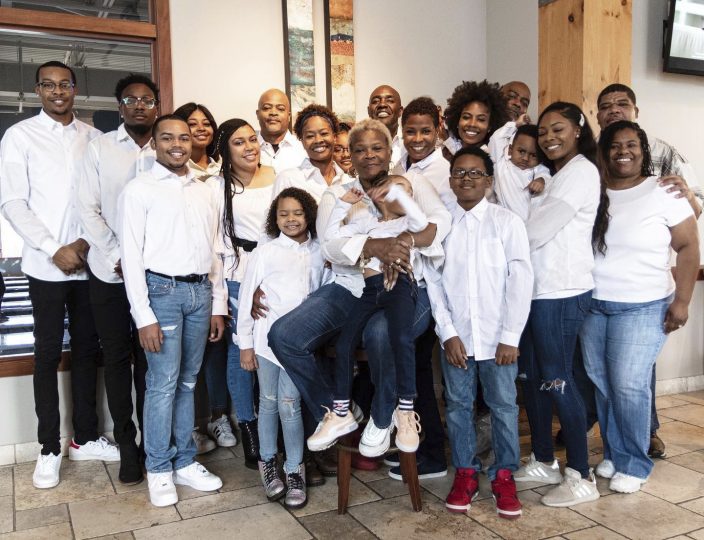 This Dec. 1, 2019 photo provided by Brandon Atkins shows his grandmother, Dianne Green, seated at center, during a birthday party for two of her grandchildren in Chicago. Green, a retiree and cancer survivor, said she struggled with loneliness after several family members died in 2019 and early 2020. Then the pandemic hit. She credits a "friendly caller" from Rush University Medical Center with pulling her out of the depths of despair. Even before the pandemic, a survey found that 61 percent of American adults said they were lonely. A year of added isolation highlighted a problem that health officials say is as harmful as obesity and smoking. (Brandon Atkins via AP)

U.S. Surgeon General Vivek Murthy, who has called loneliness a public health crisis, points out that much of the world including the U.S. ‘’was struggling with remarkably high levels of loneliness before COVID-19.’’

“The pandemic has shed new light on this struggle and reminded us of an unmistakable truth: we need each other,’’ he said in an emailed statement.

Facing troubling loneliness statistics, the United Kingdom in 2018 created a parliament position called the minister of loneliness, believed to be the world’s first. In February, after a rash of suicides, Japan appointed the second. 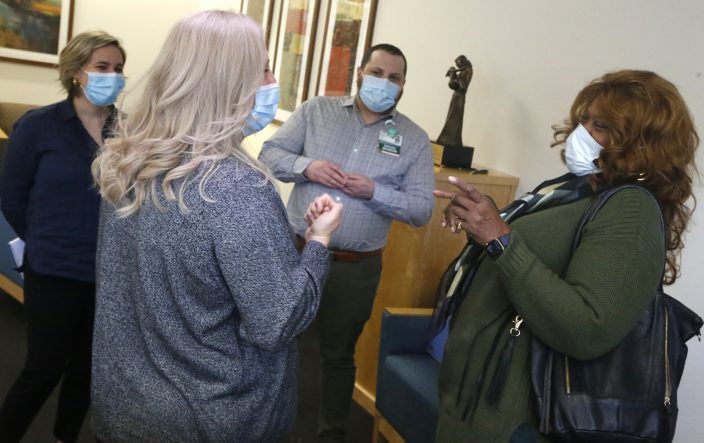 Janine Blezien, foreground left, and Dianne Green, right, laugh after meeting in person for the first time at Rush University Medical Center in Chicago on Wednesday, March 17, 2021, accompanied by Rush staff members Eve Escalante and Padraic Stanley. Blezien, a nurse at Rush, and Green, a retiree, got to know each other by phone the previous year through the hospital's "friendly caller" program, for which Blezien is a volunteer. The program is aimed at combatting loneliness, which has been exacerbated by the coronavirus pandemic. Green calls Blezien her "angel." (AP PhotoMartha Irvine)

The UK’s current minister, Baroness Diana Barran, says the pandemic has kept her busier than ever.

“I have quite a wide portfolio of responsibilities, but I think I get probably 8 or 10 times as much correspondence on loneliness as I get on anything else,” she said. 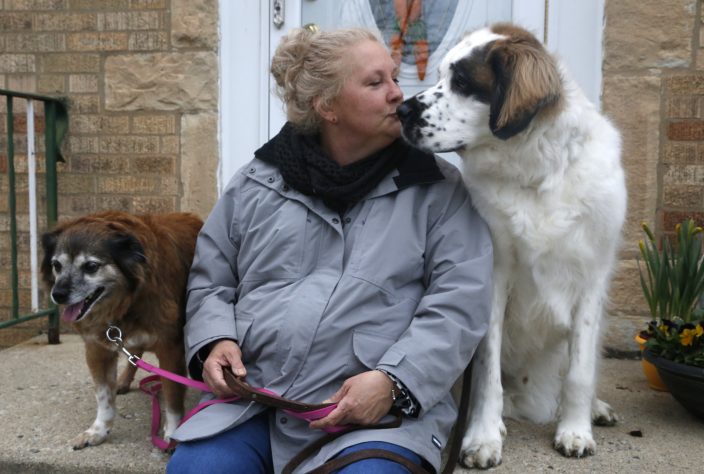 Claire Muhlawako Madzura, a 16-year-old from Manchester, helped design the socks program. Madzura is Black and an only child; her family is originally from Zimbabwe. She said growing up in mostly white areas has made it hard for her to embrace her heritage and contributed to her loneliness.

Lockdowns made her realize how much she relied on school for socializing. Using video calls to maintain friendships has been tough.

“Whenever I wear yellow socks now, I wear them proudly, because I know I’m not just representing me, I’m representing a massive group of people who’ve experienced loneliness,” Madzura said. 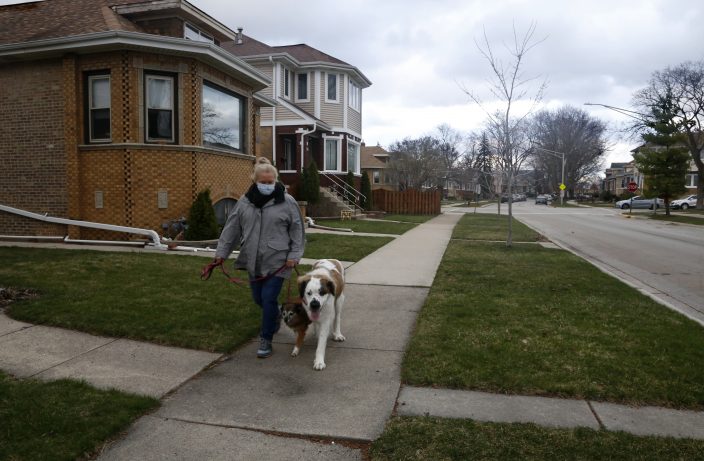 Janine Blezien walks her dogs, Kasey and Gordy, in Elmwood Park, Ill., on Wednesday, March 24, 2021. Blezien, a nurse at Rush University Medical Center, volunteered for the hospital's "friendly caller" program when the pandemic hit. The program was aimed at elderly shut-ins, with hopes to expand it. (AP PhotoMartha Irvine)

Some doctors have gone as far as writing prescriptions for loneliness. There’s no recommended medicine, so they’ve gotten creative.

Evelyn Shaw’s physician knew the widowed grandmother had been holed up in her New York City apartment, too frightened to venture out. She hadn’t seen her close-knit family in person for months.

So the doctor wrote her patient a prescription that said simply: “You are allowed to hug your granddaughter.” 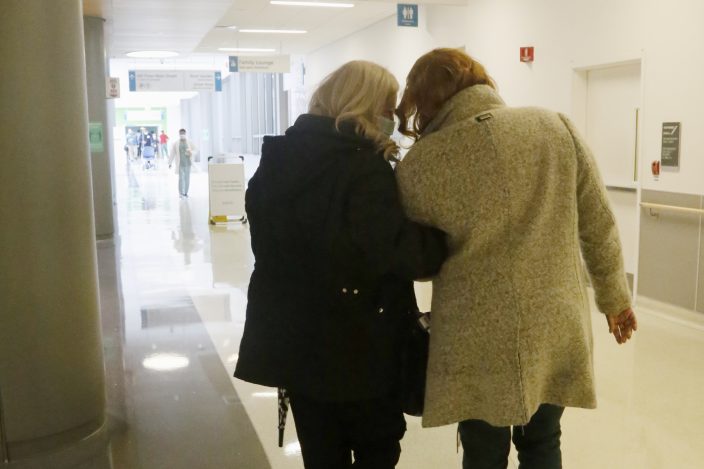 Janine Blezien, left, and Dianne Green walk arm-in-arm at Rush University Medical Center in Chicago on Wednesday, March 17, 2021, during their first in-person meeting. Blezien, a nurse at Rush, and Green, a retiree, met by phone the previous year through the hospital's "friendly caller" program for which Blezien is a volunteer. They were able to get together after being vaccinated against COVID-19, and they plan to go out to a restaurant and shop together, once they both feel safe doing so. (AP PhotoMartha Irvine)

The hug “was magical. It was surreal. We just held onto each and we cried,” Shaw said. Her daughter filmed the moment in a video that was posted on Twitter last month and went viral.

“We don’t want to live lonely and alone and terrified and afraid,” said Shaw, who along with her granddaughter has gotten a COVID-19 vaccine. “We all want to be able to gather with the people we love and our friends. We want to go back to normalcy.”

Stewart, of the American Academy of Family Physicians, said loneliness came up recently with a patient during a checkup at her Columbia, South Carolina office. 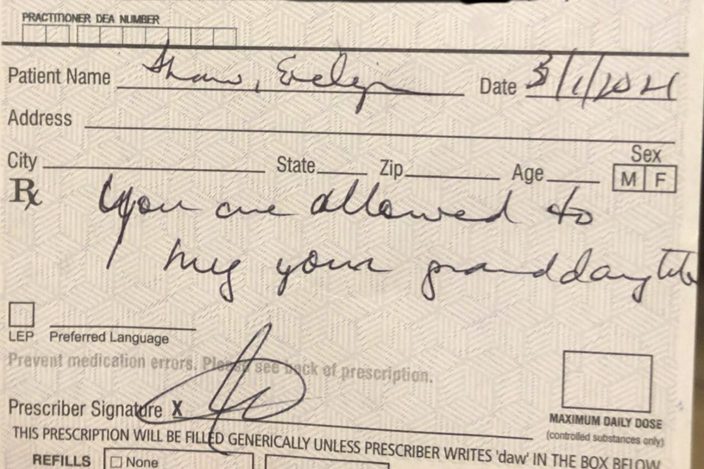 This photo provided by Laura Shaw Frank shows a prescription for a hug for her mother, Evelyn Shaw, of the Bronx borough of New York, written by her doctor on March 1, 2021. The note cleared Shaw, who hadn't been in physical contact with anyone in a year, to hug her 23-year-old granddaughter, Ateret Frank, once they had received their full doses of the COVID-19 vaccine. (Laura Shaw Frank via AP)

“While I was talking to her I saw something move in her purse,’’ Stewart said. It was a tiny dog and the patient told her ‘’this new baby has really helped me get through my loneliness right now. He has been a comfort to me.’’’

Stewart offered to buy her a carrier more suitable for pets than a handbag, and to help her get approval to use her dog as a therapy animal.

Loneliness won’t vanish even when the pandemic ends, said psychologist Benjamin Miller, a health policy analyst with Well Being Trust. Some people may still fear interaction and Miller said programs to help will be needed more than ever. 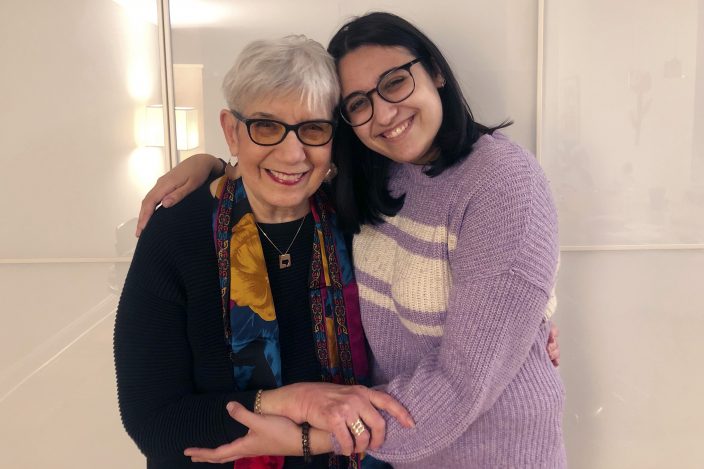 FILE - In this photo provided by Laura Shaw Frank, Evelyn Shaw hugs her granddaughter, Ateret Frank, 23, in the Bronx borough of New York, on Thursday, March 11, 2021. After a year without physical contact, Shaw received a prescription for a hug from her granddaughter after they both received full doses of the COVID-19 vaccine, written by a family doctor. (Laura Shaw Frank via AP)

In Chicago, the friendly caller program initially targeted seniors but will expand to primary care and pediatric practices, and will continue even when the pandemic subsides, said social worker Eve Escalante, manager of program innovation at Rush University Medical Center.

University of Texas researchers tested a similar friendly caller program with adults involved in a Meals on Wheels program. They found meaningful improvements in loneliness, anxiety and depression after four weeks. Several health centers have contacted the researchers to learn how to launch similar programs.

Even health insurers are paying attention. 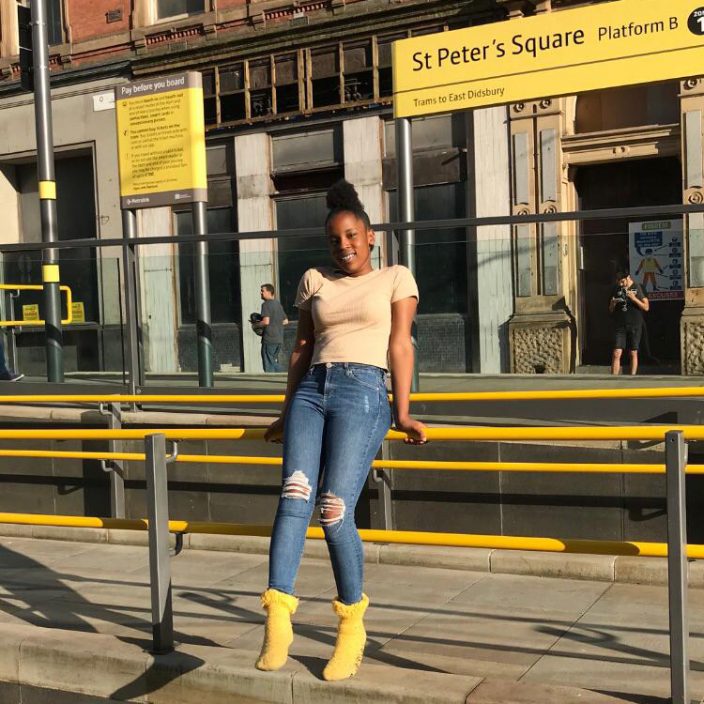 In this Sept. 22, 2019 photo provided by Elorm Fiavor, Claire Muhlawako Madzura, now age 16, poses for a photo in yellow socks on a train platform in Manchester, England. Claire was part of a panel of young people who, with the help of the Co-op Foundation, devised a "Lonely Not Alone" campaign in which they encouraged people to wear yellow socks to get people talking about loneliness, especially among her age group. The foundation's survey found that 80 percent of young people in the United Kingdom were reluctant to talk about their loneliness because they feared people's reactions. The U.K. is considered a leader in treating loneliness as a public health issue, with the first Minister of Loneliness appointed in 2018. (Elorm Fiavor via AP)

Last fall, Humana Inc. posted an online loneliness screening tool for doctors and included links for referrals to programs to help affected patients, some free and others covered by its health plans.

The insurer also created a “Far From Alone” campaign for older adults, with online links to free virtual programs, including exercise classes, cooking lessons and how-to courses on gardening and journaling.

In Chicago, vaccination allowed Dianne Green and Janine Blezien to meet briefly in person recently for the first time.

Amid hugs, tears and laughter, they seemed like old friends.

They plan to shop and spend time together as soon as it feels safer. Meantime, they talk by phone about everything — cooking, family, personal stuff. Green, a Black woman, remembers one call starting with her crying over the footage of George Floyd’s death in Minneapolis. Conversation always seems to come easy with Blezien, who is white.

“Dianne helps me as much as I help her,’’ Blezien said.

Now Green is considering becoming a volunteer for the friendly caller program, an idea that thrills Blezien.

AP Medical Writer Lindsey Tanner can be reached at ltanner@ap.org or https://twitter.com/LindseyTanner

Martha Irvine, an AP national writer and visual journalist, can be reached at mirvine@ap.org or https://twitter.com/irvineap .