Here’s a colorful explanation for Manchester United’s underwhelming form at Old Trafford this season: too much red.

The stadium has been empty since soccer restarted in June following the first lockdown after the coronavirus outbreak, and there has been a red wrap around the seats during games.

Manager Ole Gunnar Solskjaer says the color clash with the team’s famous red shirts has been a problem. 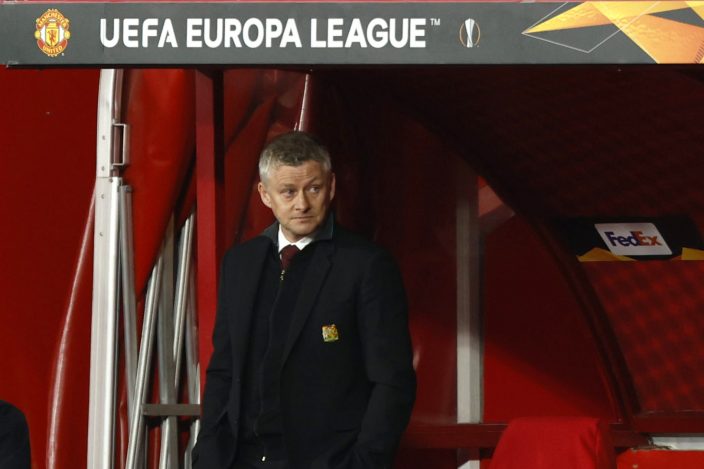 “Some of the players have mentioned that split-second decision you have to make where you look over your shoulder to see if your teammate is there or not, and the red shirt is on a red background with red seats,” Solskjaer said Wednesday.

United recently made a change in the lower tier at Old Trafford, covering the seats with a black wrap with white lettering as part of an anti-racism campaign.

United has had one home game since then — a 2-1 win over Brighton in the Premier League.

“We’ve tried to change that along with the anti-racism campaign,” Solskjaer said. “(It) was important that it wasn’t red anymore.”

United is unbeaten away from home in the Premier League this season and has won all of its away matches since dropping into the Europa League, against Real Sociedad, AC Milan and Granada.

Meanwhile, at Old Trafford, the team has lost four games in the league, was defeated by Manchester City in the English League Cup semifinals, and drew games against Sociedad and Milan in the Europa League. United hosts Granada in the second leg of the quarterfinals on Thursday, holding a 2-0 lead from the first match.

It revives memories of a United match at Southampton in the Premier League in 1996, which saw Alex Ferguson’s team fall behind 3-0 by halftime. United’s players came out for the second half having replaced their gray shirts with blue-and-white striped jerseys.

Ferguson said it had been difficult for the players to “see their teammates at distance when they lifted their heads.”