The barnyard setting of “Gunda” could hardly be more familiar, but in Russian director Victor Kossakovsky's documentary, a pigsty is rendered an almost alien landscape.

Kossakovsky's film is shot in textured black and white and his cameras are often situated, humbly, in the hay. The film is wordless. There's no human narration, no eye-popping “Planet Earth”-style camera work. “Gunda” is entirely invested in an intimate and artful view of farm animals, enlarging the lives of pigs, cows and chicken that so frequently end up on our plates.

The result, which was shortlisted for best documentary by the Academy Awards and which debuts digitally Friday, is a movie that aims to reorient the animal kingdom in cinema. It's a little like if “Babe” wandered into an art house. Here, the animals of “Gunda” aren't projections of humanity or metaphors for something else. There's no sentimental coaxing of our identification with them. They are just going about their lives, and it's for us to see things from their perspective.

This image released by Neon shows a scene from the film "Gunda." (Neon via AP)

When we meet our titular star, she's resting in a barn door. The shot is lengthy — an early signal that Kossakovsky is slowing to the pace of his subjects — and soon her dozen piglets begin scampering over her. The action of “Gunda” is modest, but everything is captured from such a realistic, ground-level view that it can feel otherworldly. Much of the movies' pleasure is in just watching how the animals move and how the sunlight — the same light that we live under — shines on them. During a spring shower, the piglets stand in the doorway, sipping raindrops.

The pigs are the main attraction but we also follow a few chickens as they timidly emerge from crates like nervous sentries, their heads darting around. They venture out, eventually meeting a wire fence with confusion. A one-legged chicken hops its way through the grass. There are cows, too, who when released from the barn romp into dewy fields like children let of school.

But most of our time is with Gunda, a majestic mother who pushes her babes along with her snout and lies in mud while they suckle. We don't ever see or hear humans, except late in the film when the wheels of a tractor roll up, looming ominously like a leviathan. By the time of the film's devastating ending, Gunda's life throbs with all the tragedy of more upright protagonists. 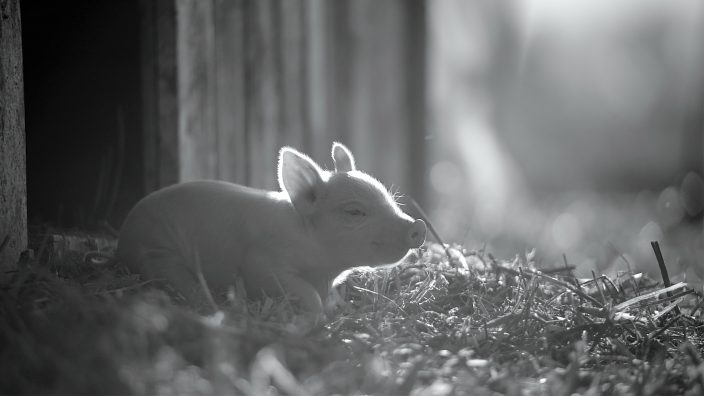 This image released by Neon shows a scene from the film "Gunda." (Neon via AP)

“Gunda” ultimately falls somewhere between banal and profound. Maybe it's both. Kossokovsky, whose previous film, “Aquarela,” was an expansive and visceral study of water, has grounded the nature film in a new movie terrain that for all its restraint, oozes empathy. He has done right by his subjects, but have we?

“Gunda," a Neon release, is rated G by the Motion Picture Association of America. Running time: 93 minutes. Three stars out of four.