Joel Embiid had 39 points and 13 rebounds and the Philadelphia 76ers beat Brooklyn 123-117 on Wednesday night in an anticipated matchup that fizzled with the Nets missing their biggest stars.

The Sixers (38-17) moved into first place in the Eastern Conference in a game played without James Harden, Kevin Durant, Blake Griffin and LaMarcus Aldridge. With the Nets standouts hurt or just rested, the game had more of a preseason feel than a possible preview of the conference final this summer.

No matter, the Sixers moved back atop the standings and have the No. 1 seed in sight with just 17 games left this season. 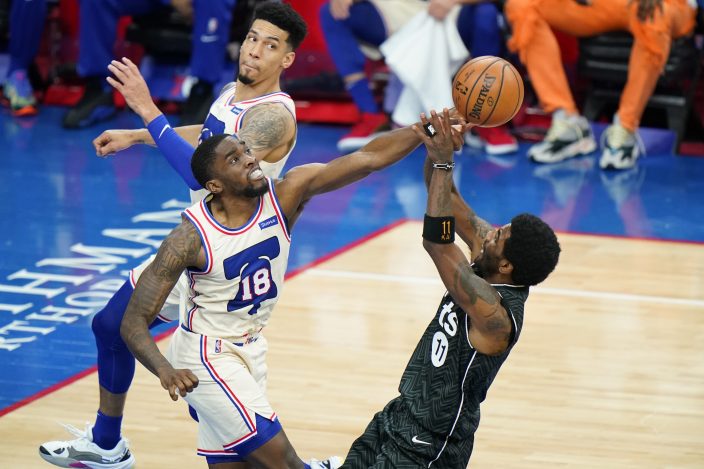 Brooklyn Nets' Kyrie Irving, right, tries to get a shot past Philadelphia 76ers' Shake Milton during the second half of an NBA basketball game, Wednesday, April 14, 2021, in Philadelphia. (AP PhotoMatt Slocum)

“It clearly would be nice to have,” Sixers coach Doc Rivers said. “It makes sense to try and have as many home games as possible.” 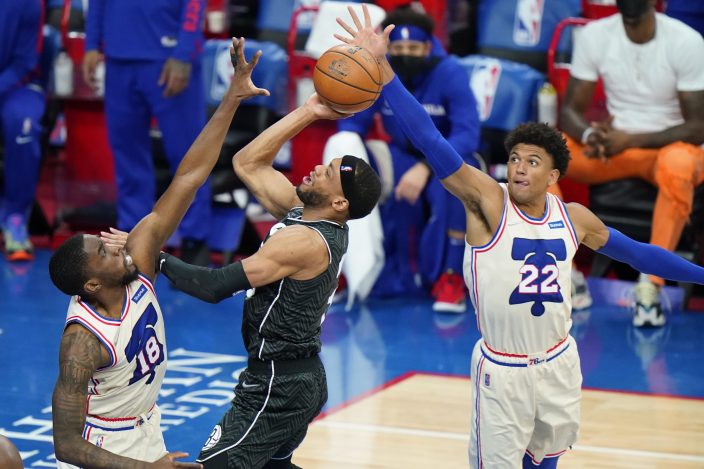 Brooklyn Nets' Bruce Brown, center, goes up for a shot against Philadelphia 76ers' Shake Milton, left, and Matisse Thybulle during the second half of an NBA basketball game, Wednesday, April 14, 2021, in Philadelphia. (AP PhotoMatt Slocum)

The Sixers had 4,094 fans spread around the arena to watch Embiid have another stellar outing against the undermanned Nets. He scored 21 points by halftime, his 14th 20-point 1st half this season (most in NBA).

Kyrie Irving scored 23 points in the first half -- his eighth 20-point first half of the season -- and finished with 37 points. Irving missed Tuesday’s game against Minnesota for personal reasons.

Irving, though, sat out as the deep reserves helped the Nets rally from 16 points down to make it 118-115 with 1:15 left. Embiid sealed the win from the free-throw line to the tune of “M-V-P!” chants. 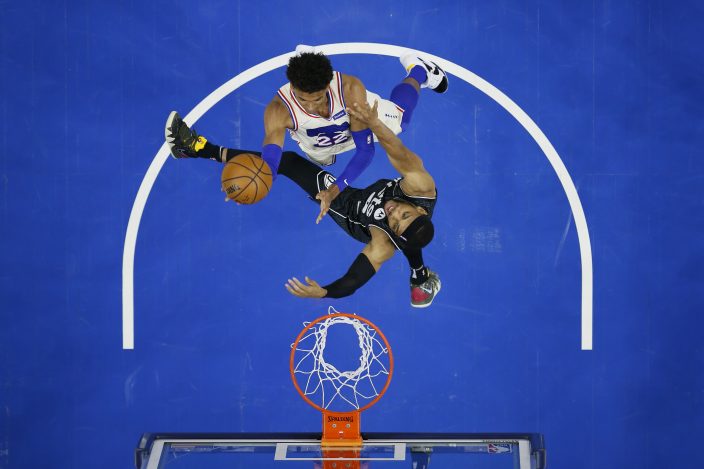 Philadelphia 76ers' Matisse Thybulle, top, goes up for a shot against Brooklyn Nets' Bruce Brown during the first half of an NBA basketball game, Wednesday, April 14, 2021, in Philadelphia. (AP PhotoMatt Slocum)

Harden is out with a strained right hamstring and Durant got a night off after playing 27 minutes against the Timberwolves. The Nets are taking it easy with Durant as he comes back from a nagging left hamstring injury.

Yes, the Nets might still be the betting favorite to win the championship — FanDuel Sportsbook had them Wednesday night as 11-5 favorites — but pushing for the No. 1 seed isn’t worth the tradeoff of having a healthy roster for the postseason.

“It’d be great to have the No. 1 seed. I think it means a lot, it’s valuable,” coach Steve Nash said. “But not at the expense of losing players or prolonging our injury situation. So I think we have to be very careful and make sure that our guys get to the finish line as whole as possible.”

Philadelphia 76ers' Ben Simmons goes up for a dunk during the first half of an NBA basketball game against the Brooklyn Nets, Wednesday, April 14, 2021, in Philadelphia. (AP PhotoMatt Slocum)

Nash brushed off suggestions the Nets held out Durant to keep the Sixers guessing how they might look as close to a full unit in the playoffs.

“I think when you start to really try to be cute, it backfires most of the time,” he said. “It wasn’t strategic. It was, this is what this is the availability we have.”

Tobias Harris made all six shots in the second quarter and scored 13 of his 26 points to help the Sixers start to open up the game. Ben Simmons closed the third on fastbreak dunk for a 94-84 lead that got a rise out of the small and enthusiastic crowd. Simmons had 17 points. 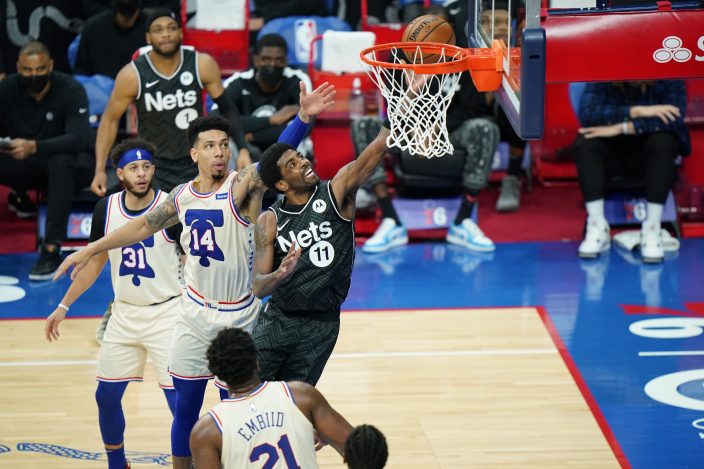 Brooklyn Nets' Kyrie Irving (11) goes up for a shot against Philadelphia 76ers' Danny Green (14) and Seth Curry (31) during the first half of an NBA basketball game, Wednesday, April 14, 2021, in Philadelphia. (AP PhotoMatt Slocum)

Nets: Also played without Tyler Johnson, Spencer Dinwiddie and Chris Chiozza. Chiozza had surgery Wednesday on his right hand after he was injured against the Timberwolves.

Rivers continues to speak out against police brutality and said there needed to be reform in police unions following the death of 20-year-old Black motorist Daunte Wright in a shooting in Minnesota.

“I think that’s where our energy should go, because we have to take out this situation where you feel like you will get away with murder because you’re protected,” Rivers said. “When you take that away, I think there would be change.”

Atlético Madrid held on as leader ...