A few years ago, Daunte Wright was talking to a high school mentor about what to do if he was pulled over by police.

“Make sure your hands are on top of the steering wheel, don’t reach for anything,” Jonathan Mason told him, given the long history of Black men shot by police during traffic stops.

“He would always say, ‘Man, why we gotta do all that just for people not to kill us?'” Mason recalled this week, days after the 20-year-old Wright was killed by a police officer in the Minneapolis suburb of Brooklyn Center. He’d been pulled over for a minor traffic violation on a Sunday afternoon. This photo provided by Ben Crump Law, PLLC. shows Daunte Wright and his son Daunte Jr., at his first birthday party. A white police officer who fatally shot Daunte Wright during a traffic stop in a Minneapolis suburb resigned Tuesday, April 13, 2021 as did the city's police chief — moves that the mayor said he hoped would help heal the community and lead to reconciliation after two nights of protests and unrest. (Ben Crump Law, PLLC. via AP)

The killing set off days of protests and unrest in the little city, as civil rights activists and thousands of demonstrators demanded justice and police accountability. The suburb’s police station is now barricaded behind concrete barriers and tall metal fencing, watched over by police in riot gear and National Guard soldiers with armored vehicles and assault rifles.

Behind it all was the sudden death of a skinny, smiling young man who loved making people laugh and who, after becoming a father in his teens, relished the role of doting young dad, according to his family and friends.

A family photo shows a beaming Wright holding his son, Daunte Jr., at his first birthday party. Another shows Wright with a COVID-19 face mask, his son wearing a bib with the inscription, “ALWAYS HUNGRY.” 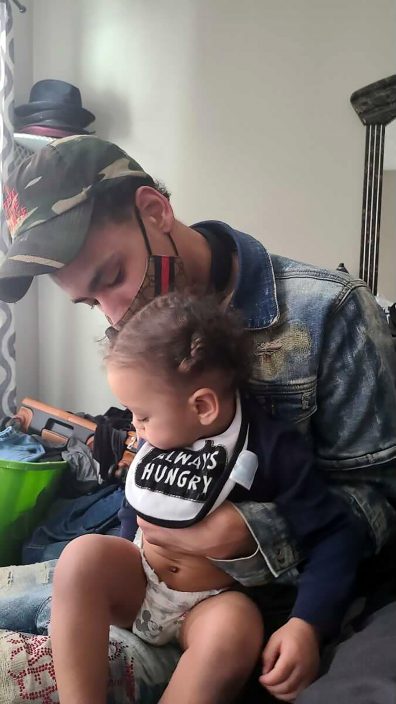 This photo provided by Ben Crump Law, PLLC. shows Daunte Wright and his son Daunte Jr. A white police officer who fatally shot Daunte Wright during a traffic stop in a Minneapolis suburb resigned Tuesday, April 13, 2021 as did the city's police chief — moves that the mayor said he hoped would help heal the community and lead to reconciliation after two nights of protests and unrest. (Ben Crump Law, PLLC. via AP)

On Wednesday, some of his extended family came to the intersection where he was shot, carefully rearranging the lawn of flowers that had been left there in his memory or sobbing as they sat in the grass.

“He had a 2-year-old son that’s not going to be able to play basketball with him. He had sisters and brothers that he loved so much,” his mother, Katie Wright, said Tuesday on “Good Morning America.”

“His smile — oh, Lord — the most beautiful smile,’’ said his aunt, Naisha Wright, calling him “a lovable young man.” 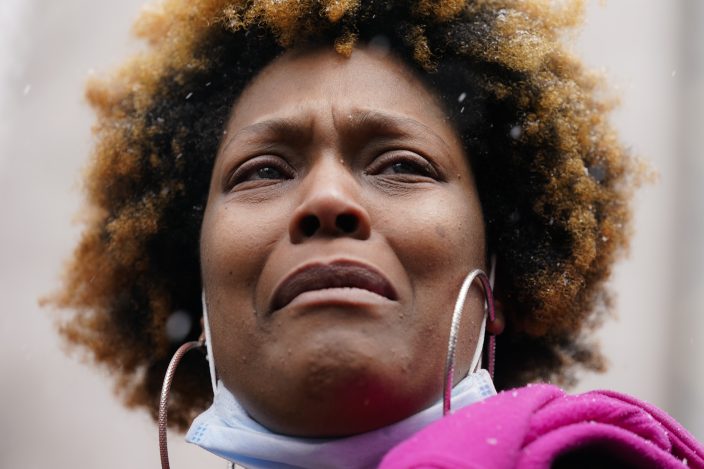 An older cousin, Mario Greer, said he and Wright loved seeing each other on holidays, especially the Fourth of July, when they liked to shoot off Roman candles.

Mason, who worked as a youth development specialist and mentor at Edison High School in Minneapolis when Wright was a student there, said he was gregarious and popular.

“He was a charismatic kid. He would joke with you, and he was so witty,” Mason said in an interview. “He was one of those kids that everybody looked up to.” Wright played on the freshman and junior varsity basketball teams, and was known for having a good left-handed shot, Mason said. As a freshman, he’d been voted class clown.

Wright would talk about what he hoped to do with his life, Mason said. 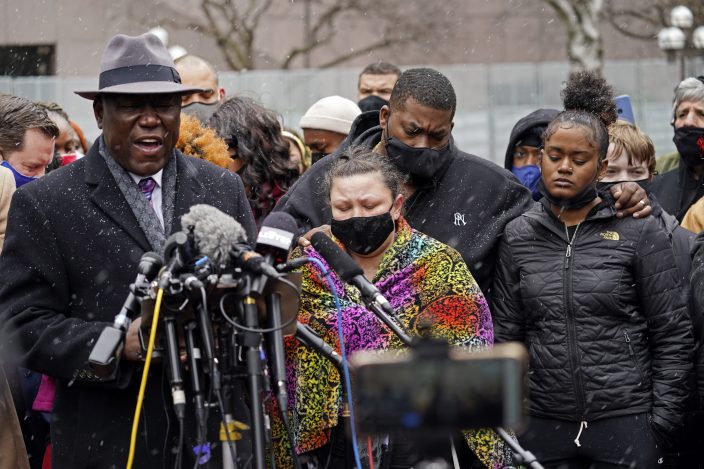 Katie Wright, center, the mother of Daunte Wright, and other family and friends gather during a news conference Tuesday, April 13, 2021, in Minneapolis as family attorney Ben Crump, left, speaks. Daunte Wright, 20, was shot and killed by police Sunday after a traffic stop in Brooklyn Center, Minn. (AP PhotoJim Mone)

In 2018, Wright moved to Minneapolis’ Patrick Henry High School, where his sister is also a student. Principal Yusuf Abdullah said he left after one semester and then went to Stadium View School.

“We got to know Daunte really well through his sister. Many staff worked with him through the years, trying to build a relationship with him, connect with him,” Abdullah said.

He said Daunte wasn’t a difficult kid, but had some issues typical of teenagers: “A troubled life? No. I think just along the lines of a teenage life.” He wouldn’t elaborate.

Daunte Wright's mother, Katie, eulogizes her son at his vigil, Monday, April 12, 2021, as the community responded to the police killing of 20-year-old Wright, with hundreds joining his family at the location on 63 Ave. N. in Brooklyn Center, Minn., where he was killed. (Jeff WheelerStar Tribune via AP)

He said discussions among young Black men about dealing with police were “absolutely a part of life” for the students at Patrick Henry.

“It’s just the fear that comes along with being a Black male.” 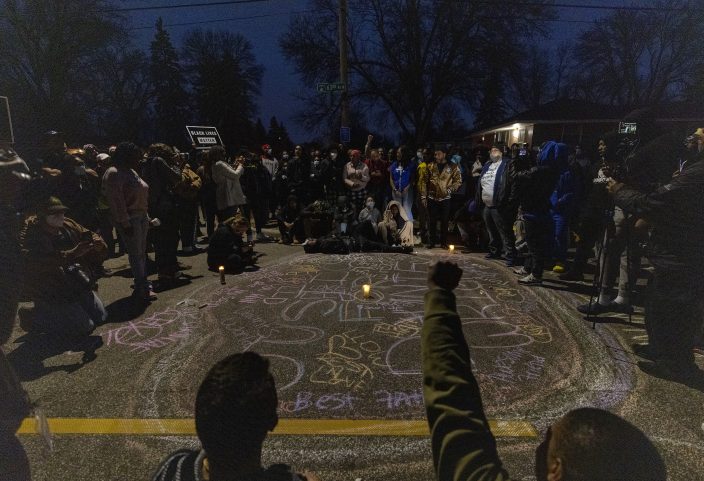 A crowd forms a circle around a memorial for Daunte Wright, in Brooklyn Center, Minn., Sunday, April 11, 2021. Wright's family told a crowd that he was shot by police Sunday before getting back into his car and driving away, then crashing the vehicle several blocks away. The family said Wright was later pronounced dead. (Carlos GonzalezStar Tribune via AP)

Wright was pulled over Sunday as he drove through Brooklyn Center. Police say he was stopped for having expired registration tags but Wright’s mother said he called her just before he was shot and said he’d been pulled him over because he had air fresheners hanging from his rearview mirror — a traffic violation in Minnesota.

Police tried to arrest Wright after realizing he was wanted on an outstanding warrant. In the ensuing scuffle, officer Kim Potter shot him. The city’s police chief, who resigned Tuesday, said he believed Potter had meant to fire her Taser, not her service pistol.

Potter, who also resigned Tuesday, was charged Wednesday with second-degree manslaughter. She was released from jail after posting $100,000 bond.

According to court records, Wright was being sought after failing to appear in court on charges that he fled from officers and possessed a gun without a permit during an encounter with Minneapolis police in June.

A search of court records shows Wright had a minor criminal record, with petty misdemeanor convictions for possession/sale of a small amount of marijuana and disorderly conduct.

After Wright was killed, his family learned of a connection between him and George Floyd, the Black man whose death under the knee of a Minneapolis police officer nearly a year ago sparked nationwide protests. Floyd’s girlfriend, Courteney Ross, said she worked with Wright while he was a student at Edison High. Ross was a teacher’s assistant and counselor at the school, said Mason, who worked with Ross. She testified the week before last in the trial of the officer accused of killing Floyd, which continues this week.

”(I’m) crushed. It’s enough that Floyd is gone, but for one of my youths to be gone as well,” Ross said Tuesday during a protest against police brutality in Minneapolis.

“He was just a wonderful, beautiful boy,” Ross said.