Negotiations to bring the United States back into a landmark nuclear deal with Iran are set to resume Thursday in Vienna amid signs of progress — but also under the shadow of an attack this week on Iran's main nuclear facility.

WHAT IS THE DEAL THEY'RE TALKING ABOUT?

In 2015, Iran signed an agreement with the U.S., Russia, China, Germany, France and Britain that was intended to set limits on Tehran's nuclear program in order to block it from building a nuclear weapon — something it insists it doesn't want to do. 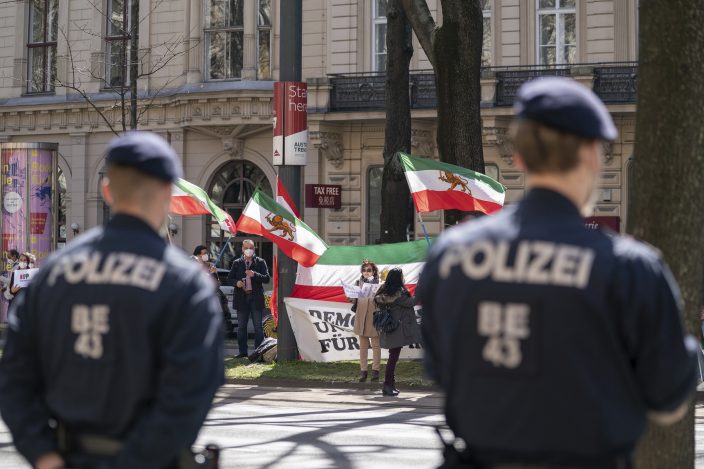 FILE - In this April 9, 2021 file photo, protesters with the Lion and Sun flag of the National Council of Resistance of Iran, an Iranian opposition group, and police officers stand near the 'Grand Hotel Wien' in Vienna, Austria, where closed-door nuclear talks with Iran take place. Negotiations to bring the United States back into a landmark nuclear deal with Iran are set to resume Thursday, April 15, in Vienna amid signs of progress — but also under the shadow of an attack this week on Iran's main nuclear facility. (AP PhotoFlorian Schroetter, File)

In exchange, Iran received relief from sanctions that those powers had imposed, including on its exports of oil and access to the global banking system. Iran was allowed to continue to pursue its nuclear program for civilian purposes, with strict limits on how much uranium it could enrich, the purity it could enrich it to and other measures.

Before the deal, conservative estimates were that Iran was within five to six months of being able to produce a bomb, while some feared it was within two to three months. With the deal safeguards in place, that “breakout time” was estimated to be more than a year.

But in 2018, then-President Donald Trump pulled the U.S. unilaterally out of the deal, criticizing clauses that ease restrictions on Iran in stages — and also the fact that eventually the deal would expire and Iran would be allowed to do whatever it wanted with its nuclear technology. He also said it needed to be renegotiated to address Iran’s ballistic missile program and regional influence such as backing militant groups. 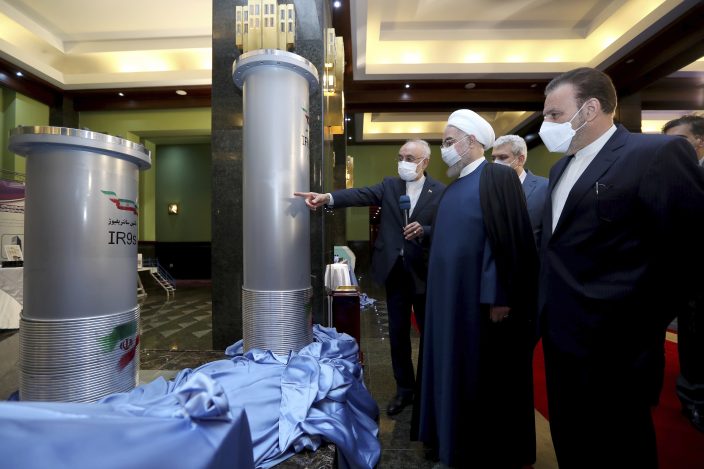 FILE - In this April 10, 2021 file photo released by the official website of the office of the Iranian Presidency, President Hassan Rouhani, second right, listens to head of the Atomic Energy Organization of Iran Ali Akbar Salehi while visiting an exhibition of Iran's new nuclear achievements in Tehran, Iran. Negotiations aimed at bringing the United States back into the landmark nuclear deal with Iran are resuming on Thursday, April 15. At issue is how to revive a 2015 deal between Iran and world powers that was intended to set limits on Tehran’s nuclear program in order to make it impossible for it to build a nuclear weapon. (Iranian Presidency Office via AP, File)

The crippling American sanctions that followed took their toll on Iran’s economy — but failed to bring Tehran back to the table to broaden the deal as Trump wanted. Instead, Tehran steadily exceeded the limitations set by the deal to pressure the remaining members for economic relief.

In February, U.S. Secretary of State Antony Blinken said of Iran's estimated breakout time that “we’re down to three or four months and heading in the wrong direction.”

SO WHAT'S BEING DISCUSSED NOW? 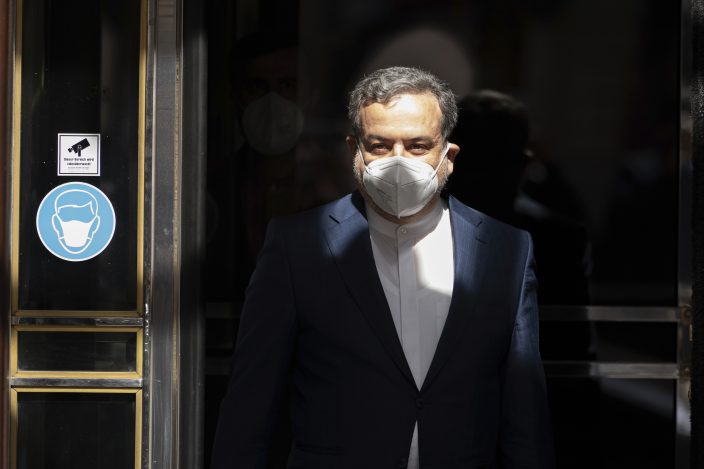 FILE - In this April 9, 2021 file photo, political deputy at the Ministry of Foreign Affairs of Iran, Abbas Araghchi, leaves the 'Grand Hotel Wien' where closed-door nuclear talks with Iran take place in Vienna, Austria. Negotiations to bring the United States back into a landmark nuclear deal with Iran are set to resume Thursday, April 15, in Vienna amid signs of progress — but also under the shadow of an attack this week on Iran's main nuclear facility. (AP PhotoFlorian Schroetter, File)

U.S. President Joe Biden has said that he wants to rejoin the deal, but that Iran must reverse its violations.

The European Union called the talks in the hopes of doing just that. Though an American delegation is present in Vienna, they are not meeting directly with Iran. Instead, diplomats from the other countries shuttle back and forth between the two sides.

Heading into the talks as they started last week, Iran said it was willing to return to full compliance with the deal, but that the U.S. would first have to drop all of the sanctions imposed under Trump.

That is complicated, however. The Trump administration also added sanctions on Iran outside those related to its nuclear program, including over allegations of terrorism, human rights violations and for the country's ballistic missile program.

Still, there are signs of hope. The talks quickly moved past that “who goes first” debate and have already started addressing specifics, said Aniseh Bassiri Tabrizi, an Iran scholar at Britain’s Royal United Services Institute.

“It’s a very good development that there are these working groups actually talking and looking at the nitty gritty,” she told The Associated Press.

For Iran to return to the deal, it must revert to enriching uranium to no more than 3.67% purity, stop using advanced centrifuges and drastically reduce how much uranium it enriches, among other things.

Despite the challenges, Tabrizi said the task ahead is not as complicated as the one that faced the group in 2015 since they already have a deal to refer to.

HOW LONG WILL THE TALKS TAKE?

There is no specified timeframe. Diplomats involved say the issues cannot be solved overnight, but are hoping for a resolution in weeks rather than months — for several reasons.

The original deal was agreed after Iranian President Hassan Rouhani, widely seen as a moderate, first took office. Rouhani can't run again in upcoming June elections due to term limits, and he hopes to be able to leave office with Iran again able to sell oil abroad and access international financial markets.

Meanwhile, the U.S. could face a much tougher negotiation if it doesn't get a deal before Rouhani leaves. Hard-liners in Iran reject the nuclear deal, saying it hasn’t delivered enough economic relief and is a slippery slope to more pressure on Iran. That doesn’t necessarily mean they would end talks if elected, though it would complicate things, said Sanam Vakil, deputy director of the Chatham House policy institute’s Middle East and North Africa program.

There is another reason to move quickly: Iran in February began restricting International Atomic Energy Agency inspections of its nuclear facilities. Instead, it said that it would preserve surveillance footage of the facilities for three months and hand them over to the IAEA if it is granted sanctions relief. Otherwise, Iran said it would erase the recordings.

WHAT OBSTACLES COULD GET IN THE WAY?

Lots, as recent events have shown. Over the weekend, Iran's Natanz nuclear facility was sabotaged. It's not clear what exactly happened, but a blackout damaged centrifuges there.

The attack was widely suspected of being carried out by Israel, which opposes the nuclear deal, though authorities there have not commented.

Iran says Israel explicitly hopes to derail the talks with the sabotage. Rouhani said he still hoped the talks would yield a result — but the attack has complicated matters. For one, Iran responded by announcing it would increase uranium enrichment to 60% purity — far higher than ever before — and install more advanced centrifuges at the Natanz facility.

And in the wake of the developments, both sides have ramped up the rhetoric.

On Wednesday, Iran’s Supreme Leader Ayatollah Ali Khamenei, who has final say on all matters of state in the Islamic Republic, dismissed all offers seen so far in Vienna as “not worth looking at." Still, he said he had confidence in his negotiators.

Blinken, meanwhile, said Washington had shown its seriousness by participating in the indirect talks in Vienna, but with Tehran's recent announcements, “it remains to be seen whether Iran shares that seriousness of purpose.”