Erling Haaland walked off the field looking physically and emotionally drained, clutching a shirt he’d been given by an opponent after Borussia Dortmund lost to Manchester City in the Champions League quarterfinals.

Haaland may have his own City shirt next season.

Dortmund is in danger of failing to qualify for next season’s Champions League for the first time since 2010-11, and that could fracture the squad. 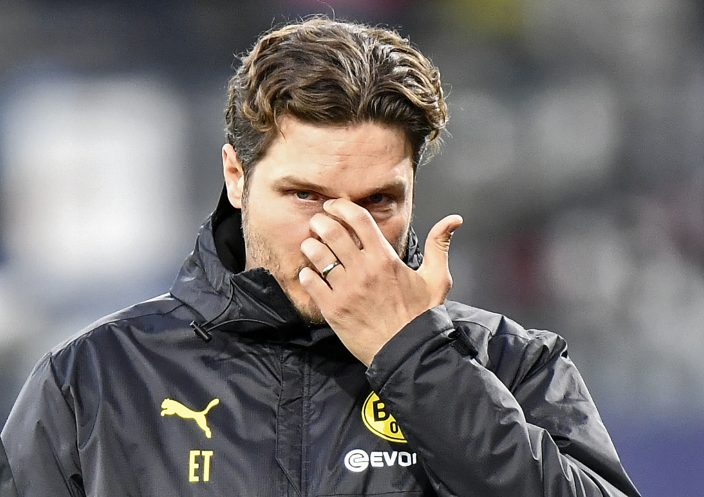 The club is in fifth place in the Bundesliga with six games left to make up a seven-point gap for the final Champions League place. With each loss, the chance of seeing Haaland in the yellow and black of Dortmund next season seems to drop further.

Players like Haaland, Jude Bellingham, Jadon Sancho and Gio Reyna didn’t choose Dortmund so they could play in the Europa League.

Haaland’s agent has already made it clear he is looking at other clubs for his client, and there’s no lack of interest. City manager Pep Guardiola raved about the 20-year-old Haaland’s talent, and Bellingham’s, too, after the win Wednesday in Dortmund.

That all raises the question of what Dortmund is trying to achieve.

At its best, the team is exhilarating to watch, the young stars combining with more experienced players such as Marco Reus to produce exciting soccer and challenge for trophies — but never quite win them. At its worst, it’s an underperforming team trapped in an endless rebuild as bigger clubs pick off its best players.

The rise of Leipzig means there’s now another German club following a Dortmund-style model of focusing on young talent, but with more league success.

Dortmund is making a show of stability. Sporting director Michael Zorc insisted last week that the club plans to keep Haaland in its squad next season. Club officials point to Dortmund’s healthy financial position amid the coronavirus pandemic, a relic of past big sales like Ousmane Dembele’s move to Barcelona in 2017.

Addressing “the rich clubs in the world,” CEO Hans-Joachim Watzke told the BBC on Wednesday that Dortmund could not be browbeaten into selling players at a discount.

“They must know this is the price. It is not another price,” he said, pointing to last year’s prolonged and ultimately fruitless talks with Manchester United over Sancho.

Dortmund has also made some missteps when it comes to coaches. Before he was fired in December, Lucien Favre’s two-year tenure produced spectacular high-scoring games, but also farcical defensive collapses. Dortmund named Edin Terzic as interim coach and went about seeking a successor, settling on Marco Rose for next season. Since that move was announced in February, though, Rose has won only two of 10 games with Borussia Mönchengladbach while Terzic has won praise for his Dortmund team’s combative performance against City.

Dortmund’s game against Werder Bremen on Sunday could offer the ideal breather after the Champions League exit. Bremen has lost its last four league games and Dortmund could cut the gap to the top four if third-place Wolfsburg drops points against leader Bayern Munich.

If Dortmund can’t beat Bremen, though, a season in the Europa League looks all but certain while Haaland could be back in the Champions League with a City shirt on his back.