The mayor of the east Tennessee city of Knoxville requested the release of video footage of a high school shooting that left one student dead and a police officer wounded, but a local prosecutor said Thursday she denied the request amid the ongoing investigation.

Mayor Indya Kincannon said on Twitter that she had requested that redacted video be made available to the media and the public from Monday's shooting at Austin-East Magnet High School in east Knoxville. Police said a 17-year-old student had a gun inside a school and was fatally shot in a confrontation with officers in a bathroom, but details of what authorities say happened have changed since the incident.

Community activists have demanded release of the footage. 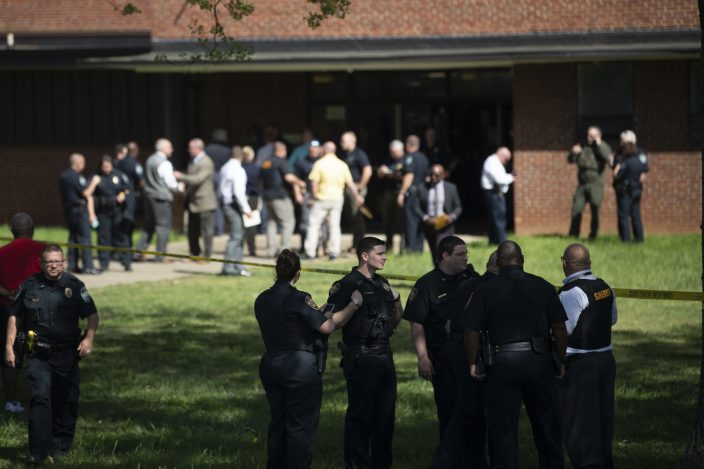 A school resource officer was wounded by a gunshot, which the TBI said Wednesday did not come from the student's gun, raising the possibility that the officer could have been hit by police gunfire.

Kincannon said she sought the release of video to provide transparency and because she thought “a greater understanding of the circumstances of this tragedy will help our city heal.” Kincannon said District Attorney General Charme Allen “respectfully declined."

“Allen explained that she made this decision in order to maintain the integrity of the on-going investigation and to protect the constitutional rights of anyone who might be charged,” Kincannon said in her tweet.

The mayor also said state law regarding the release of video of minors taken inside of a school and a court order governing release of police videos in Knox County complicate the situation.

At a Thursday news conference, district attorney Allen said the public will be allowed to see the body camera evidence at some point.

“Before you're allowed to see that, it has to complete its function as criminal evidence,” Allen said, adding that investigators are still gathering evidence and talking to witnesses, including officers.

“To release any part of the evidence in this case before we have collected all the evidence may taint things that are still being done,” Allen said.

The TBI said after the shooting Monday that a preliminary investigation showed police responded to a report of a possible gunman about 15 minutes before 3:30 p.m. dismissal. Police found the teen, since identified as 17-year-old as Anthony J. Thompson, Jr., in a bathroom, the TBI said.

Police ordered the student, who is Black, to leave the bathroom but he would not comply, Rausch said.

“As officers entered the restroom, the subject reportedly fired shots, striking an officer,” said an initial TBI statement about the shooting released Monday.

Police fired twice, and Thompson was shot and killed, the TBI said.

On Wednesday, the TBI revised its account in a second statement on the shooting, saying the student’s gun was fired during a struggle with an officer.

“Preliminary examinations indicate the bullet that struck the KPD officer was not fired from the student’s handgun,” the TBI statement released Wednesday said.

The only other gunshots cited in the report were fired by officers. The TBI declined to answer a follow-up question about whether the officer was struck by an officer’s bullet.

During her news conference, Allen, the district attorney, said the initial information released by the TBI “was released too early, it was incorrect.”

Officer Adam Willson was shot in the leg and is recovering after surgery. Willson and three other officers involved in the shooting have been placed on temporary administrative leave during the investigation, the Knoxville Police Department said Thursday.

Willson and another one of the officers are white, and the two others are Black.

The shooting comes as the community reels from off-campus gun violence that has left three other Austin-East students dead this year. Classes at the high school have been canceled through Monday.

It also comes as more classrooms are reopening to students after months of remote learning during the coronavirus pandemic, a period that saw a drop in mass killings in the U.S. The nation has seen a series of mass shootings in recent weeks.