Nikolaj Ehlers scored twice and Connor Helleybuck made 31 saves and the Winnipeg Jets defeated the Toronto Maple Leafs 5-2 on Thursday.

Kyle Connor added two goals, including one into an empty net, to go along with an assist, while Mark Scheifele had a goal and two assists for Winnipeg. Neal Pionk chipped in with two assists as the Jets moved within three points of the Leafs for the top spot in the North Division.

John Tavares, with a goal and an assist, and Alex Galchenyuk scored for Toronto. 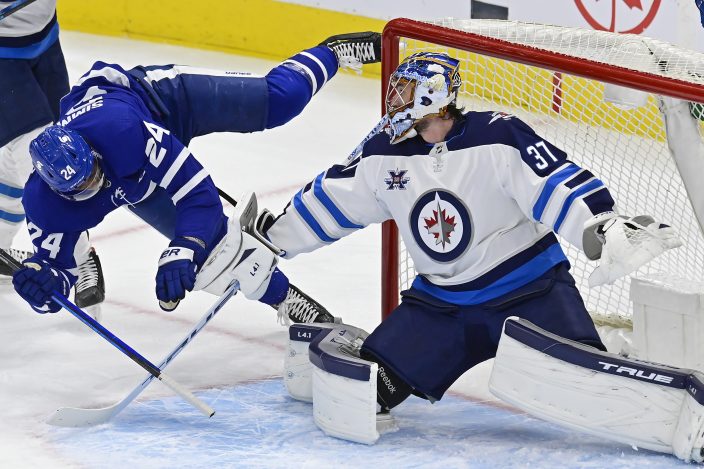 Jack Campbell, who started the season 11-0-0 prior to Monday’s 4-2 loss in Montreal to the Canadiens, allowed three goals on six shots in the first period before getting pulled in favor of David Rittich.

Acquired on Sunday from the Calgary Flames, he lost in overtime in his Leafs debut Tuesday against his former team. Rittich finished with 16 saves.

The teams are scheduled to meet again next Wednesday, Friday and Saturday in Winnipeg to wrap up the season series, with Toronto still leading 4-3-0, although two of Winnipeg’s losses came after regulation. 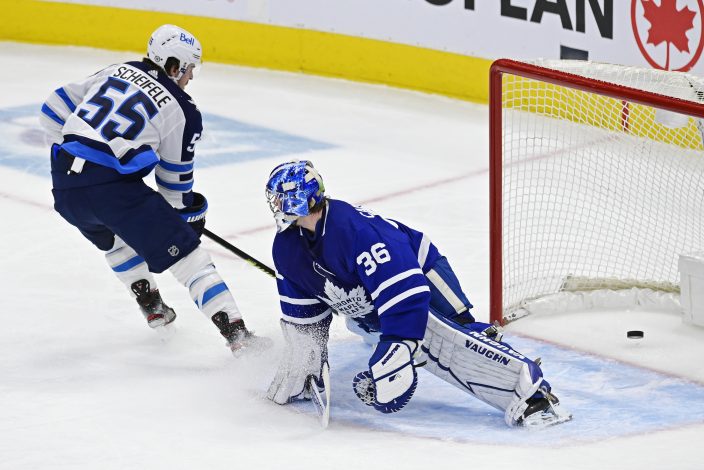 The Jets, who were playing the second of a back-to-back after securing a series split Wednesday against the Senators, finished their five-game road trip through Montreal, Ottawa and Toronto 4-1-0.

Toronto was minus Auston Matthews — the NHL leader in goals with 32 in 40 games — because of injury, while Jets captain Blake Wheeler (concussion) sat out his fifth consecutive games.

Leafs head coach Sheldon Keefe said Matthews, who briefly stepped on the ice for Thursday’s morning skate before leaving, is day to day and not expected to be out long term. 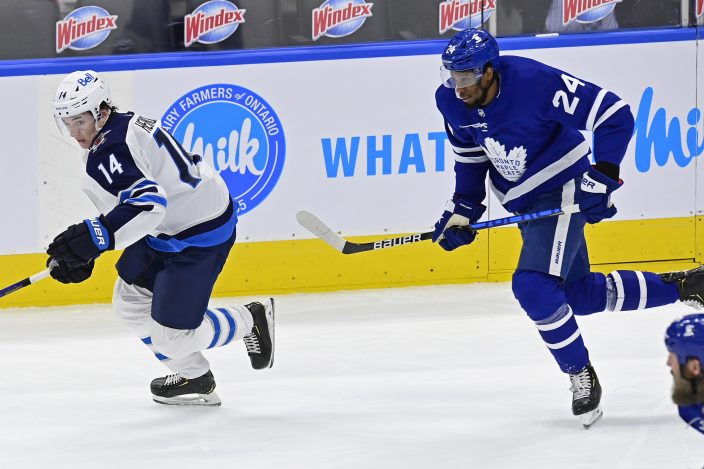 When asked if the injury was the same wrist issue that caused Matthews to miss three games this earlier this season, Keefe answered: “It’s similar, but not the same.”

That unit clicked 3:41 into the first when Galchenyuk took a pass from Marner and beat Hellebuyck upstairs for his third goal of the season and second with the Leafs on a play that needed another look to make sure it entered Winnipeg’s net. 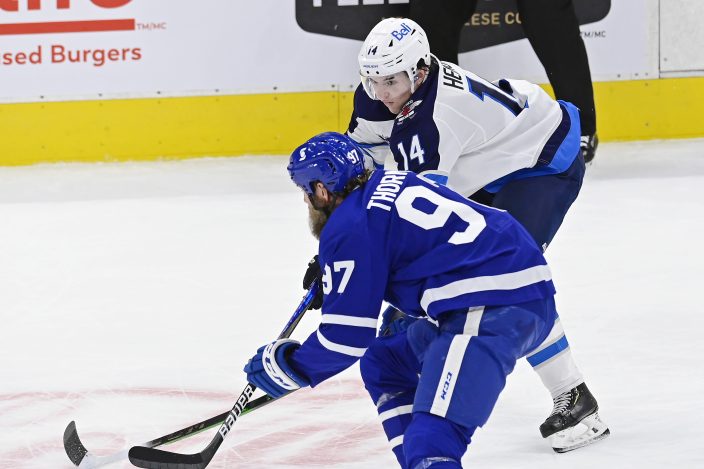 Toronto’s power play — a head-scratching 1 for 39 coming into Thursday going back to March 9 — got a two-man advantage for 71 seconds, but was unable to break through.

And it was all Jets from there the rest of the period.

The visitors connected 9 seconds into their first power play when Ehlers scored his 19th on a shot past Campbell at 10:45 to make it 1-1. 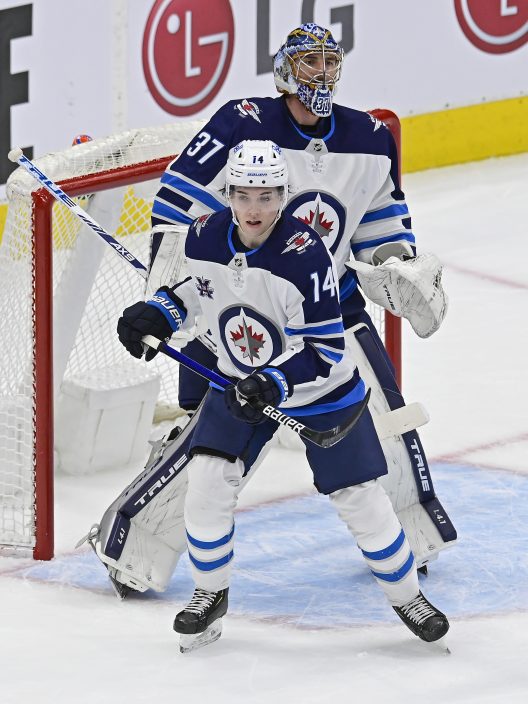 Winnipeg Jets' Ville Heinola (14) stands with goaltender Connor Hellebuyck (37) as they take on the Toronto Maple Leafs during the first period of an NHL hockey game Thursday, April 15, 2021, in Toronto. (Frank GunnThe Canadian Press via AP)

Connor then took a nice feed from Scheifele and retook the team lead in goals with his 20th on shot off the rush just 27 seconds later.

Winnipeg kept coming and went up by two at 13:54 — its third goal in 3:09 — when both Toronto defensemen pinched, allowing Scheifele to race in alone on Campbell to score his 17th and end the goaltender’s night.

The Leafs, who came in having dropped two straight, including Tuesday’s 3-2 overtime setback against Calgary after going 9-0-1 over their previous 10, weren’t much better to start the middle period, but found life when Tavares scored his 14th off a pass from Jason Spezza at 6:47.

Winnipeg got its second power play later in the second, but Rittich was there to shut the door on a couple of chances, including one off Connor’s stick.

Toronto got a man advantage to start the third when Pierre-Luc Dubois was whistled for an illegal check to the head, but the Leafs again couldn’t capitalize.

Ehlers then stole the puck from Marner and poked it past Rittich to score his 20th — to once again tie Connor for the Jets lead — at 5:34.

Toronto got its fourth power play shortly thereafter, but again couldn’t muster much to fall to 1 for 43.

Connor scored his team-leading 21st into an empty net with 36.1 seconds to seal it as the Leafs fell to 0-2-1 over their past three.

NOTES: Tavares has 10 points in his past seven games. ... Scheifele and Ehlers extended their respective point streaks to six games. ... Spezza played his 100th game for the Leafs. ... Winnipeg native Adam Brooks replaced Matthews in the lineup. ... Toronto rookie Nick Robertson picked up an assist on the second-period goal for his first regular-season NHL point. ... Leafs goalie Frederik Andersen (lower-body injury) was on the ice before Thursday’s morning skate. While it was a positive sign, Keefe said there’s still no time for his return. Andersen last played March 19.

Maple Leafs: at Vancouver on Saturday.