Andrew Young delivered a grand slam for his first hit of the season to cap Arizona's 10-run outburst in just two innings against Washington starter Patrick Corbin, and the Diamondbacks went on to beat the struggling Nationals 11-6 on a windy, chilly Thursday night.

An announced crowd of 6,666 booed as Washington dropped to 3-7. The Nationals, who dealt with a COVID-19 outbreak earlier this month, have yet to win consecutive games.

Corbin, a left-hander in the third season of a six-year, $140 million contract, was such a key cog in Washington's run to the 2019 World Series championship, doing double duty in the rotation and in relief. But he has struggled since. 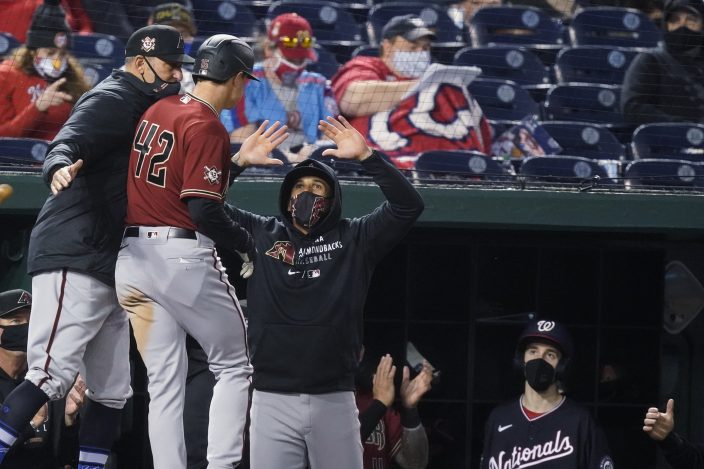 Arizona Diamondbacks' Andrew Young, second from left, celebrates his grand slam with his teammates during the second inning of a baseball game against the Washington Nationals at Nationals Park, Thursday, April 15, 2021, in Washington. (AP PhotoAlex Brandon)

A two-time All-Star in six seasons with Arizona before joining Washington, he went 2-7 last year. He currently owns an 0-2 record and a 21.32 ERA after allowing nine earned runs while getting merely six outs against the Diamondbacks (5-8), an outing that included a pair of hit batters, a trio of homers and a quartet of walks.

Carson Kelly put Corbin's eighth pitch into the seats in right-center. The next batter, Eduardo Escobar, sent one over the wall in left-center for his fifth homer. It was 3-0 after the top of the first, and while the Nationals went up 4-3 after the bottom half against Merrill Kelly (1-2), thanks in part to Starlin Castro's two-run shot, the Diamondbacks piled on in the second.

Arizona batted around for the second time and tacked on seven more runs as the temperature dropped into the low 50s. 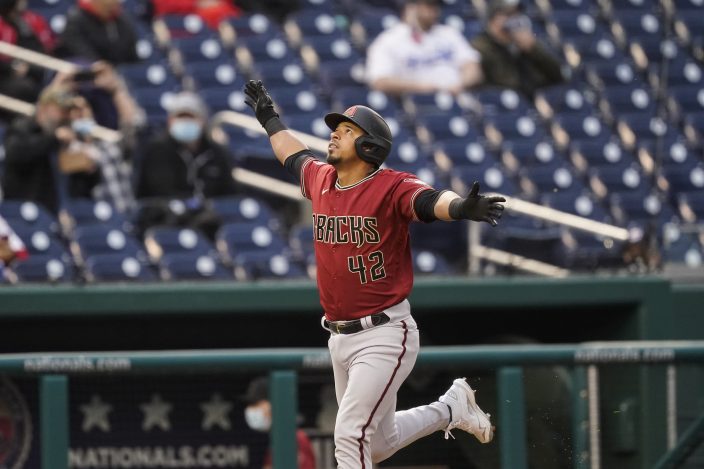 Arizona Diamondbacks' Eduardo Escobar runs the bases on a solo home run during the first inning of the team's baseball game against the Washington Nationals at Nationals Park, Thursday, April 15, 2021, in Washington. (AP PhotoAlex Brandon)

Young's first career slam was the highlight. Other runs came via a walk, a hit batter and an error.

It was even worse than Corbin's other start of 2021, when he gave up six runs in 4 1/3 innings in a 9-5 loss to the Los Angeles Dodgers last weekend. 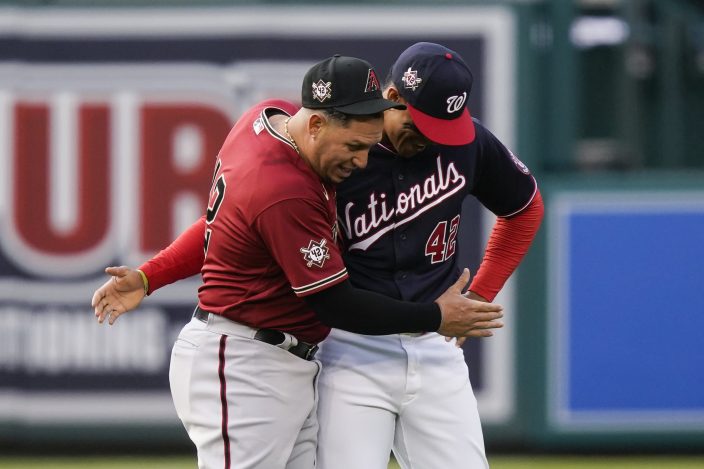 Pavin Smith added a solo shot for Arizona in the eighth off Daniel Hudson.

Arizona 3B Asdrúbal Cabrera went 0 for 6 against his former club: He played for Washington in 2014, 2019 and 2020, including starting five World Series games two seasons ago. “I’m never going to forget that year,” Cabrera said, noting that he figured his career would end in 2019 after Texas let him go, allowing Washington to sign him. He had hoped the Nationals would re-sign him in 2021, but “they never called me.” The Nationals played a video tribute before the game, but his first name was misspelled — “Asdrébal” — on the scoreboard during his first at-bat.

Diamondbacks: Reliever Joakim Soria (strained left calf) is throwing off flat ground and “if all progresses,” he is expected to throw a bullpen session off a mound Saturday, manager Torey Lovullo said. ... 1B coach Dave McKay, 71, still is dealing with a broken rib and an “inability to take deep breaths" after a dugout fall more than a month ago at spring training, Lovullo said. “When we see him at the ballpark is still unknown."