One by one, the Republican leaders of Congress have made the trip to Mar-a-Lago to see Donald Trump.

Kevin McCarthy visited after the deadly Jan 6 Capitol insurrection, counting on the former president's help to win back control of the House in 2022. The chair of the Senate Republican campaign committee, Rick Scott, stopped by to enlist Trump in efforts to regain the Senate. Lindsey Graham goes to play golf.

But missing from the appearances has been perhaps the most powerful Republican elected official in the country, Mitch McConnell, a onetime ally who ushered the former president’s legislative and judicial agenda to fruition, but now claims to want nothing to do with Trump. 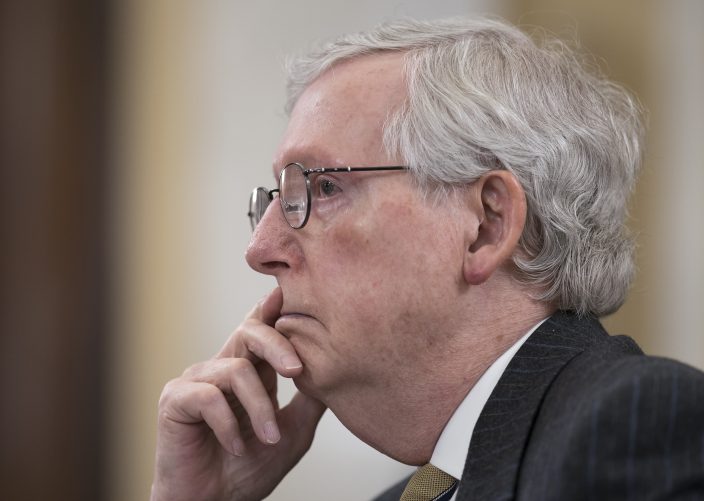 FILE - In this March 24, 2021, file photo Senate Minority Leader Mitch McConnell, R-Ky., listens as the Senate Rules Committee holds a hearing on the "For the People Act," which would expand access to voting and other voting reforms, at the Capitol in Washington. McConnell, a onetime ally of former President Donald Trump who ushered the former president’s legislative and judicial agenda to fruition, but now claims to want nothing to do with Trump. (AP PhotoJ. Scott Applewhite, File)

The very public pilgrimages, and the noticeable refusal to make one, have placed congressional Republicans at a crossroads, with one branch of the party keeping close to Trump, hoping to harness the power of his political brand and loyal voters for their campaigns, and the other splitting away, trying to chart the GOP’s post-Trump future.

With no obvious heir apparent or leader-in-waiting, the standoff between the party’s two highest-ranking figures poses an uneasy test of political wills and loyalties, particularly for the rank-and-file lawmakers in Congress dependent on both men for their political livelihoods. Congress has become more Trump-like in the former president’s absence, as a new generation of Trump-aligned lawmakers emerges, particularly in the Senate, and more centrist Republicans announce their retirements.

“We've got enough problems without fighting within ourselves," said Sen. Tommy Tuberville, R-Ala., who was swept into office this year with Trump's support. 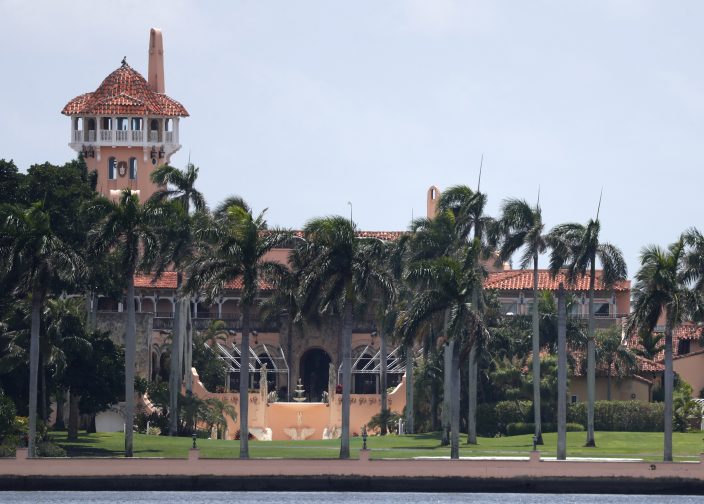 FILE - In this July 10, 2019, file photo President Donald Trump's Mar-a-Lago estate is shown in Palm Beach, Fla. One by one, the Republican leaders of Congress have made the trip to Mar-a-Lago to see Donald Trump. Kevin McCarthy visited after the deadly Jan 6 insurrection, counting on the former president's help to win back control of the House. The chairman of the Senate Republican campaign committee, Rick Scott, stopped by to enlist Trump in efforts to regain the Senate. Lindsey Graham goes to play golf. (AP PhotoWilfredo Lee, File)

“You know, being a football coach, that’s what I would tell our players and coaches,” he said. "You bring your whole team down. So that’s pretty much how I think about this. As a team, we don’t need arguing between teammates. We just need them to be on the same page.”

The stark fallout was on display at the Republican donor retreat when Trump lashed into McConnell as a “stone-cold loser” but then was feted with an honorary award from Scott, the National Republican Senatorial Committee chair launching the campaign efforts.

Asked about it later, McConnell responded with perhaps the most cutting retort of all: He simply ignored Trump.

“What I'm concentrating on is the future,” said McConnell, the Senate Republican leader.

Unlike past presidents who did not win a second term, the end of Trump’s presidency has not brought closure as much as it has a lingering uncertainty on Capitol Hill about the party’s pathway back to power. He is promising to return to the political stage, perhaps for his own bid for the White House. But more immediately he is being enlisted by GOP leaders in support of congressional candidates to win back the House and Senate.

“Is it ideal? I don’t know. But is it sustainable? Sure,” said Scott Jennings, a GOP strategist and longtime McConnell confidant. “It’s easy to see how they both could frankly be successful in their individual goals without ever speaking another word to each other.”

Jennings said McConnell and Trump aren’t jockeying for power as much as bringing complementary skills to the campaigns ahead. The former president can rev up his base of supporters with rally-style speeches while McConnell can assemble the campaign strategies and candidates to regain control of the Senate.

“One of them is in party-building mode, which is McConnell, and the other one is in ax-grinding mode,” he said.

“They don’t have to be golfing buddies,” he said.

The congressional leaders want, and expect, Trump to play a role in next year’s midterm elections as they try to wrest control from Democrats, who have the slimmest majorities in the House and Senate in recent memory.

“God, yes,” Graham, R-S.C., said recently. “He’s sitting on a mountain of money and has a 90% approval rating among Republicans.”

McCarthy, the House Republican leader, said Trump has been helpful so far in House GOP campaign efforts. “Like all of the former presidents, they help, they’re engaged in many different ways,” McCarthy said.

Yet as Trump assembles a political operation from his private club in Florida, his biggest priority so far appears to be trying to defeat some of the party’s most prominent lawmakers, including Alaska Sen. Lisa Murkowski and Wyoming Rep. Liz Cheney, who were among those voting to impeach him over the Jan. 6 insurrection.

While Trump has also endorsed some GOP incumbents, other Republican lawmakers, particularly in the Senate, have simply announced they are retiring.

The deadly riot has become a political line of demarcation on Capitol Hill over those GOP lawmakers who stood with Trump to overturn Biden’s victory during the Electoral College tally. Trump was impeached for inciting the insurrection as he urged a mob of supporters to “fight like hell” for his presidency.

One of the lawmakers Trump recently endorsed is Alabama GOP Rep. Mo Brooks, who is running for the Senate seat that will be vacant with the retirement of longtime GOP Sen. Richard Shelby.

Brooks had been a leader of the House efforts to challenge the election results and joined the rally outside the White House on Jan. 6. Trump encouraged the mob that day to head to the Capitol. Five people died, including a Trump supporter shot by police and a police officer who died later after fighting the mob of Trump loyalists who stormed the Capitol.

At a dinner last month at Mar-a-Lago, Scott said he encouraged the president's support to win back the Senate — after the primaries are settled.

Many Republicans recall the 2010 election when they won back control of the House, but not the Senate, because some of the candidates who won primary elections on the tea party wave were too conservative or hardline to appeal to voters statewide.

Shelby said he wished the former president and McConnell would "put their differences aside," minding President Ronald Reagan's admonition not to battle each other.

“I wish he’d stay out of all the Senate races, but he’s not,” Shelby said about Trump.

“He’s got a lot of energy, he’s got a dedicated following. I don’t think he’s looking for retirement.”

St. Louis man who waved gun at protesters may vie for S ...