Ukrainian President Volodymyr Zelenskyy is holding talks on Friday with French President Emmanuel Macron and German Chancellor Angela Merkel amid growing tensions with Russia, which has deployed troops at the border with the country.

Zelenskyy is traveling to Paris to meet with Macron during a working lunch at the Elysee presidential palace. Both heads of state will then talk via videoconference with Merkel, Macron's office said.

The talks come as Ukraine and the West have sounded alarms in recent weeks about the concentration of troops along Russia’s border, a buildup that the U.S. and NATO have described as the largest since 2014. 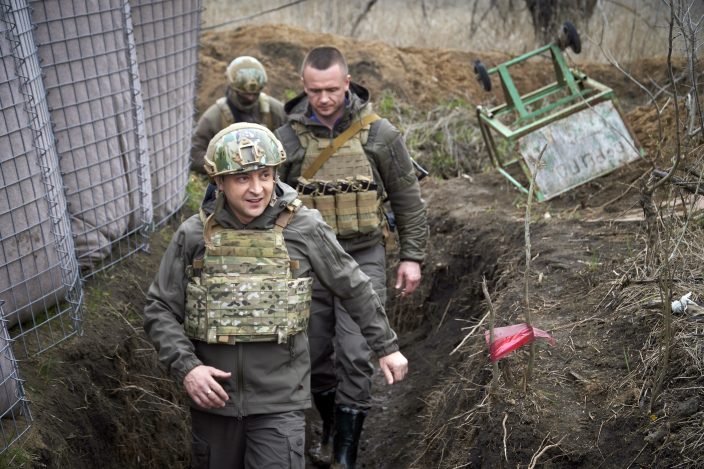 FILE - In this April 9, 2021, file photo, Ukrainian President Volodymyr Zelenskyy visits the war-hit Donbas region, eastern Ukraine. Tensions are rising over the conflict in eastern Ukraine, with growing violations of a cease-fire and a massive Russian military buildup near its border with the region. Zelenskyy was elected president of Ukraine by a landslide in April 2019 on promises to end the fighting and root out the country's endemic corruption. (Ukrainian Presidential Press Office via AP, File)

In an interview with French newspaper Le Figaro, Zelenskyy said “it’s time to stop talking and to make decisions.”

He said Friday's talks notably aim at discussing security issues. “Europe’s security is depending on Ukraine’s security,” he said, adding his country is seeking support from the European Union and the NATO alliance.

“Our goal ... is to de-escalate tensions,” a French official at the French presidency, speaking on condition of anonymity ahead of the talks, said.

“All the work we’re doing is in support of Ukraine’s sovereignty,” the official said.

More than 14,000 people have died in seven years of fighting between Ukrainian forces and Russia-backed separatists in eastern Ukraine that erupted after Russia’s 2014 annexation of Ukraine’s Crimean Peninsula. Efforts to reach a political settlement have stalled, and violations of a shaky truce have become increasingly frequent in recent weeks across Ukraine’s eastern industrial heartland known as the Donbas.

Zelenskyy said Thursday after chairing a meeting of Ukraine’s security council that the discussions in Paris are important for preparing the so-called “Normandy format” talks involving the leaders of Ukraine, Russia, France and Germany.

Their last meeting in Paris in December 2019 helped ease tensions but failed to make any progress on a political settlement.

The British government has announc ...