One after another, quarterbacks once believed to be franchise cornerstones after being top five draft picks changed addresses this offseason in staggering succession.

Matthew Stafford and Jared Goff switched teams in a swap of former No. 1 overall picks. Carson Wentz and Sam Darnold were traded away by teams that had recently tried to build around those passers. Mitchell Trubisky had to settle for a backup contract deal after flaming out in Chicago.

Those were part of a growing pattern around the league as teams have never been more willing to use high draft picks on quarterbacks, and never been quicker to cut ties when those investments don’t pay off. 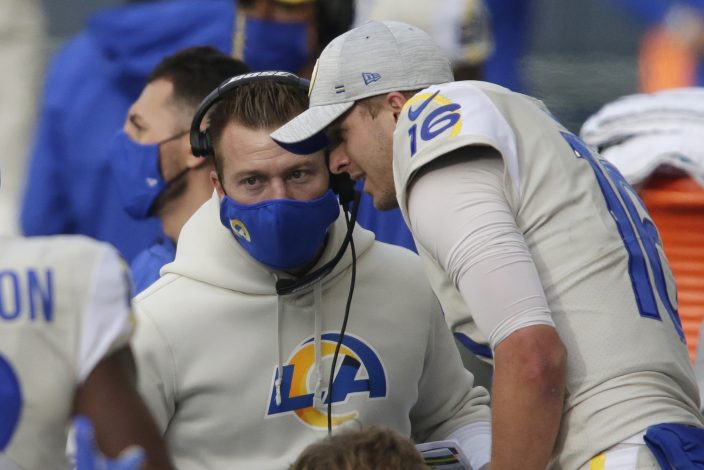 FILE - In this Dec. 27, 2020, file photo, Los Angeles Rams quarterback Jared Goff talks with coach Sean McVay on the sideline during the first half of the team's NFL football game against the Seattle Seahawks in Seattle. One after another, quarterbacks once believed to be franchise cornerstones after being top five picks changed addresses this offseason in staggering succession. Matthew Stafford and Goff switched teams in a swap of former No. 1 overall picks. (AP PhotoScott Eklund, File)

The cycle will continue later this month when quarterbacks are expected to be drafted with the top three picks and a chance that a record five could go in the top 10 as the lure of a top passer on an affordable rookie deal is too enticing to pass up.

The Jets will get back on the rookie quarterback roller coaster three years after trading up to take Darnold with the third pick. With New York holding the second selection in a quarterback-heavy draft, general manager Joe Douglas dealt Darnold to Carolina and now has his eyes on another potential franchise QB, likely BYU's Zach Wilson.

“We felt like this was the best decision for the entire organization moving forward,” Douglas said, “and hitting the reset button.” 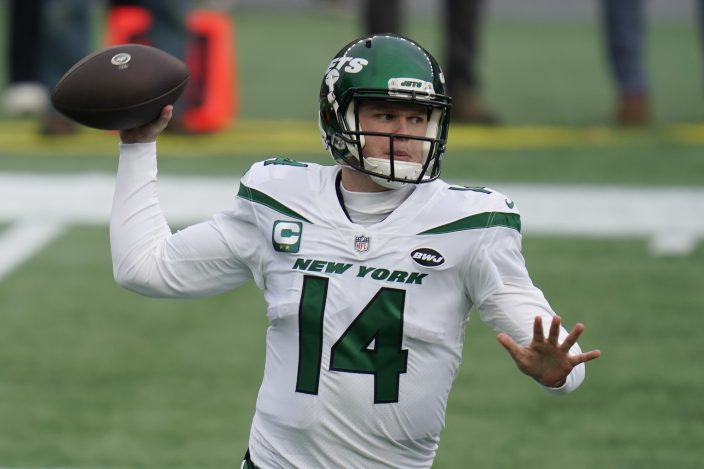 FILE - In this Jan. 3, 2021, file photo, New York Jets quarterback Sam Darnold rolls out to pass against the New England Patriots during the first half of an NFL football game in Foxborough, Mass. The Jets will get back on the rookie quarterback roller coaster three years after trading up to take Darnold with the third pick. With New York holding the second selection in a quarterback-heavy draft, general manager Joe Douglas dealt Darnold to Carolina and now has his eyes on another potential franchise QB. (AP PhotoCharles Krupa, File)

The resets are coming quicker than ever, with the Jets' decision to trade Darold after his third season the quickest a team has moved on from a top 5 quarterback since the Raiders cut 2007 No. 1 overall pick JaMarcus Russell after his third season in the NFL. But moves like it are happening more frequently, with the Cardinals trading away 2018 first-rounder (No. 10) Josh Rosen after one season in order to take Kyler Murray first overall in 2019.

In all, four of the five quarterbacks taken with top five picks from 2016-18 changed teams this offseason. Darnold was one of three to get traded, joining the top two picks in the 2016 draft: No. 1 selection Goff dealt from the Rams to Detroit for 2009 top pick Stafford, and No. 2 choice Wentz from Philadelphia to Indianapolis. Trubisky, the third overall pick by Chicago in 2017, was signed as a free agent to be a backup in Buffalo to Josh Allen. Only 2018 No. 1 pick Baker Mayfield remains with his original team as he enters his fourth season with Cleveland. 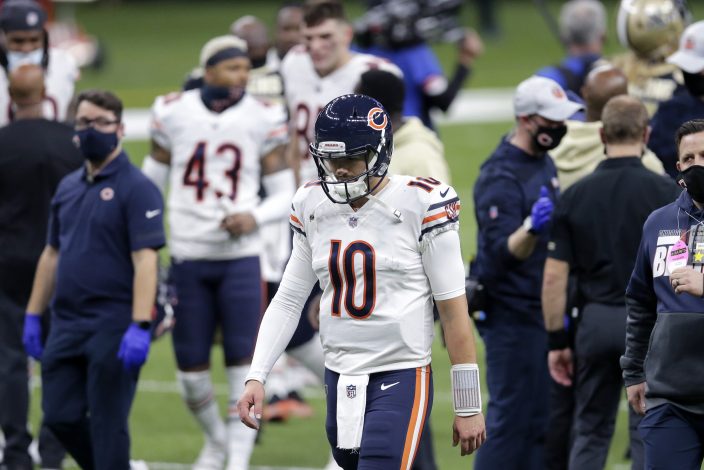 FILE - Chicago Bears quarterback Mitchell Trubisky (10) walks off the field after an NFL wild-card playoff football game against the New Orleans Saints in New Orleans, in this Sunday, Jan. 10, 2021, file photo. The Saints now 21-9. One after another, quarterbacks once believed to be franchise cornerstones after being top five picks changed addresses this offseason in staggering success. Trubisky had to settle for a backup contract deal after flaming out in Chicago. (AP PhotoBrett Duke, File)

Later this month several more teams will hope they found their franchise guy, with Jacksonville, the Jets and San Francisco all expected to take quarterbacks with the first three picks on Aug. 29, something that has happened only twice (1971, 1999) in the common draft era. Clemson’s Trevor Lawrence is widely expected to go first to the Jaguars, then Wilson as the possible replacement for Darnold at No. 2.

If that happens, the Niners would have their choice of Ohio State’s Justin Fields, Alabama’s Mac Jones and North Dakota State’s Trey Lance, with the other two potentially going later in the top 10 to teams like Atlanta, Detroit or Denver. And don't forget another quarterback-needy team willing to trade up such as New England, Washington or Chicago.

San Francisco made the big move because of the desire to find one of the handful of quarterbacks that can turn a good team into a Super Bowl contender on an annual basis.

“It’s a risk every single year you go into an NFL season without one of those top five guys,” said coach Kyle Shanahan, who traded the No. 12 pick and two future first-round choices to move up to No. 3. “It’s very tough to win in this league and there’s only a few quarterbacks that you’re going to win because of just the quarterback. Very few, and even those guys still need a good team around them. You’ve got to take risks. This is a risk we were willing to take.”

Shanahan lost a Super Bowl following the 2019 season to one of those quarterbacks as Patrick Mahomes led a fourth-quarter comeback to deliver the Chiefs the title. Mahomes is by far the most successful of the 22 quarterbacks taken in the top 10 of the past 10 drafts, a rate that is double what it had been in the common draft era.

The change came following the 2011 CBA that implemented a rookie wage scale, which increased the value of quarterbacks on rookie contracts. This will be the seventh straight season with multiple QBs going in the top 10, more than doubling the previous longest streak in the common draft era of three years.

The hit rate on those quarterbacks hasn’t been extremely high, however, with none of the 11 picked from 2011-16 still on the team making that selection; two of them picked in the past four drafts — Trubisky and Rosen — already are gone.

Some of those QBs who have moved on had some level of success, with 2011 No. 1 overall selection Cam Newton winning an MVP and taking Carolina to the Super Bowl. And 2012 top pick Andrew Luck putting together a sustained stretch of success before an early retirement in 2019 due to injuries.

Others who are still on their current teams have shown promise, with Allen leading Buffalo to the AFC title game last season, Mayfield winning Cleveland’s first playoff game in 26 years, and Murray and Offensive Rookie of the Year Justin Herbert showing flashes of stardom.

For others such 2020 top 5 picks Joe Burrow and Tua Tagovailoa, or 2019 first-rounder Daniel Jones, it might still be too early to judge.

Others never reached their lofty expectations with the teams that drafted them whether because of injuries (Robert Griffin III) or poor play (Trubisky, Blake Bortles and Blaine Gabbert).

For 2012 No. 8 pick Ryan Tannehill, it took changing teams from Miami to Tennessee for him to live up to his billing, something the Panthers hope will be replicated with Darnold.

“I think in this offense ..., with the weapons we have around him, that he can take that next step with us,” GM Scott Fitterer said.

If not, the Panthers could soon be looking for a replacement in the top 10 of the draft.