A major House Republican fundraising committee overseen by GOP Minority Leader Kevin McCarthy received over $770,000 from Steve Wynn, a Las Vegas casino mogul who stepped down from his company in 2018 after multiple women accused him of sexual misconduct.

The donation, which Wynn made in late March, was one of the largest given so far this election cycle to Take Back the House 2022, according to campaign finance disclosures made public Thursday. The committee splits massive fundraising hauls between 59 Republican House members, as well as about 20 other GOP political operations.

The acceptance of the sum amounts to a reversal by McCarthy, who in 2018 joined a growing chorus of Republicans who said they would donate campaign cash given by Wynn to charity after the misconduct allegations surfaced. Wynn has denied the allegations. 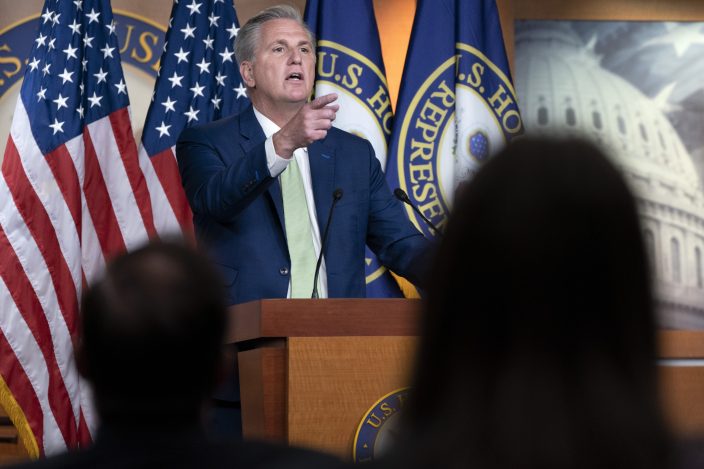 The contribution underscores Republicans' willingness to look beyond the messy and potentially problematic backgrounds of some donors as they embark on the massively expensive task of attempting to wrest control of the House back from Democrats.

In a brief statement Friday, McCarthy did not address his decision to accept money from Wynn after previously rejecting it.

“Steve Wynn is one of the great innovators in the history of modern capitalism. I thank him for his continued support, and I look forward to working with him to retake the House Majority," McCarthy said.

“He has the same rights and entitlements as any other private citizen in the United States of America,” said Donald Campbell, an attorney for Wynn, when asked about the donations.

The misconduct allegations against Wynn came at a high-point in the #MeToo movement. The Wall Street Journal reported that several women said the billionaire harassed or assaulted them and that one case led to a $7.5 million settlement with a manicurist formerly employed by the company.

At the time, Republicans were forcefully criticizing Democrats over past donations they accepted from movie mogul Harvey Weinstein, who was later sentenced to 23 years in prison for rape and sexual assault.

The accusations against Wynn led to his abrupt resignation from Wynn Resorts. A prolific donor and fundraiser, he also stepped down from his post as campaign finance chairman of the Republican National Committee.

In the years since, he has kept a relatively low profile. In 2020, he donated about $700,000 to former President Donald Trump’s fundraising operation, as well as $9 million to Senate Leadership Fund, an outside group that works to elect Republican senators. But he was otherwise largely shunned by rank-and-file Republicans in Congress.

Records show the money he gave in March has already been disbursed to at least 55 House Republicans, who each received a $5,800 legal maximum donation that was raised through Take Back the House 2022.

Democrats say that the House GOP's acceptance of the donations indicates McCarthy was disingenuous when he previously rejected Wynn's money.