Seattle earned its third straight win and seventh in nine games overall. Mitch Haniger had three hits for the second time this week. France and Kyle Seager each drove in two runs.

The Mariners trailed 5-4 before Evan White connected for a solo drive in the eighth. J.P. Crawford and Haniger opened the ninth with walks against Ryne Stanek (0-1), and France's drive against Ryan Pressly landed on the warning track in right-center and hopped over the wall. 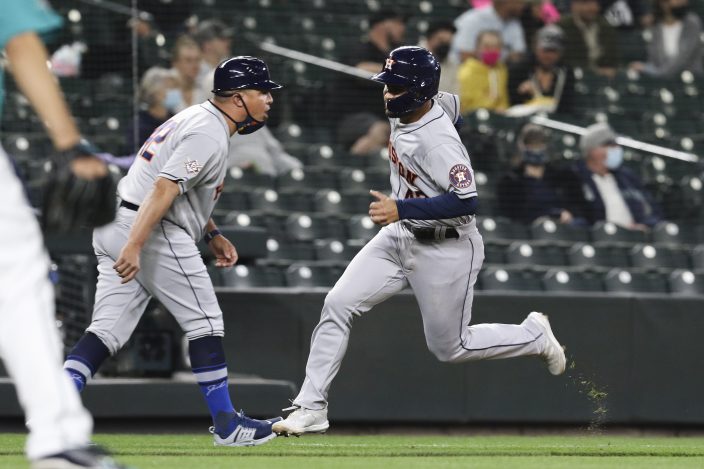 Houston Astros' Alexander De Goti rounds third on the way to scoring on a double by Chas McCormick during the fifth inning of the team's baseball game against the Seattle Mariners on Friday, April 16, 2021, in Seattle. (AP PhotoJason Redmond)

Anthony Misiewicz (2-0) worked a scoreless inning for the win after returning from the 10-day injured list earlier in the day.

The short-handed Astros played without four starters — including Jose Altuve, Alex Bregman and Yordan Alvarez — on the injured list due to COVID-19 protocols.

But they still had a 5-2 lead heading into the bottom of the seventh. Alex De Goti drove in two runs with his first major league hit, and fellow rookie Chas McCormick had an RBI double. Jose Urquidy struck out seven in 5 2/3 innings. 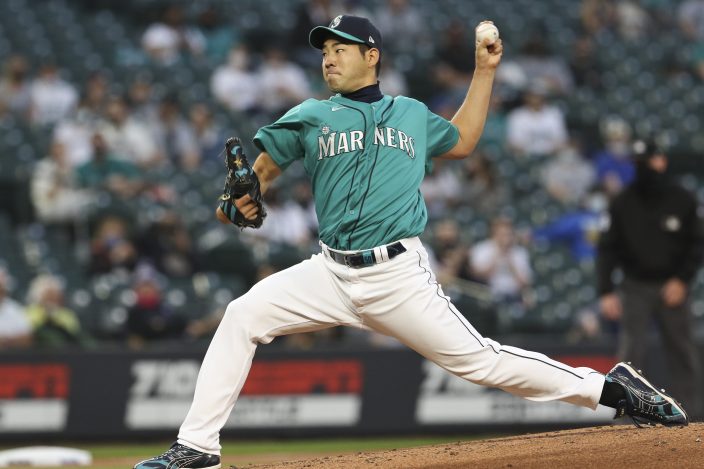 Haniger drove in a run in the seventh, recording his third hit. He has at least one hit in 13 of 14 games this season and has reached safely in every contest.

France also had a sacrifice fly in the eighth. 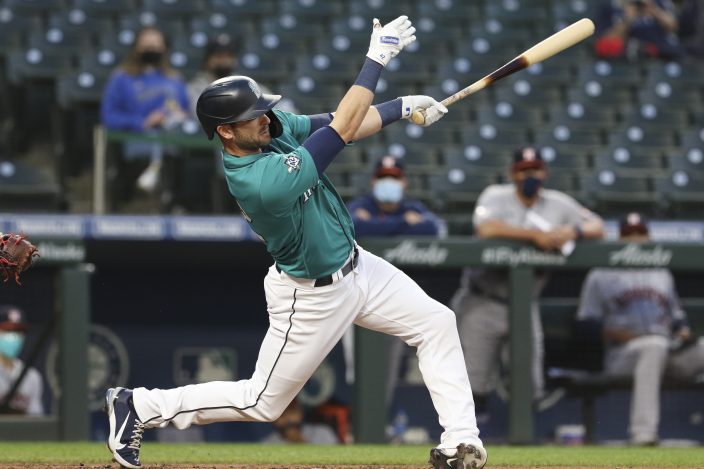 Seattle Mariners' Mitch Haniger singles on a line drive during the third inning of the team's baseball game against the Houston Astros on Friday, April 16, 2021, in Seattle. (AP PhotoJason Redmond) 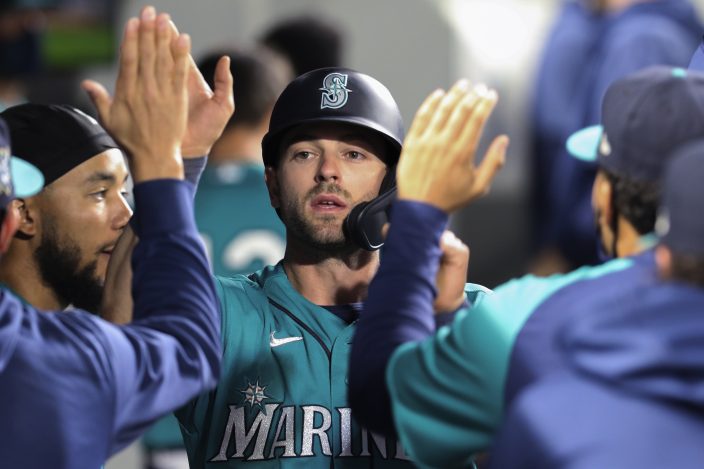 Seattle Mariners' Mitch Haniger celebrates in the dugout after scoring on a Kyle Seager double during the sixth inning of the team's baseball game against the Houston Astros on Friday, April 16, 2021, in Seattle. (AP PhotoJason Redmond)

McCullers gave up six runs in 3 2/3 innings during a 6-4 loss to the Detroit Tigers on Wednesday. It’s unclear how the reaction will affect his next start.

Astros: Baker had no update on the five players who were moved to the injured list due to COVID-19-related concerns. He said the players have continued to test negative, but must still sit out due to protocols. ... Baker gave OF Kyle Tucker the night off after he went 0 for 5 at Detroit on Wednesday. He entered Friday's game as a pinch hitter in the ninth, flying out to center field. 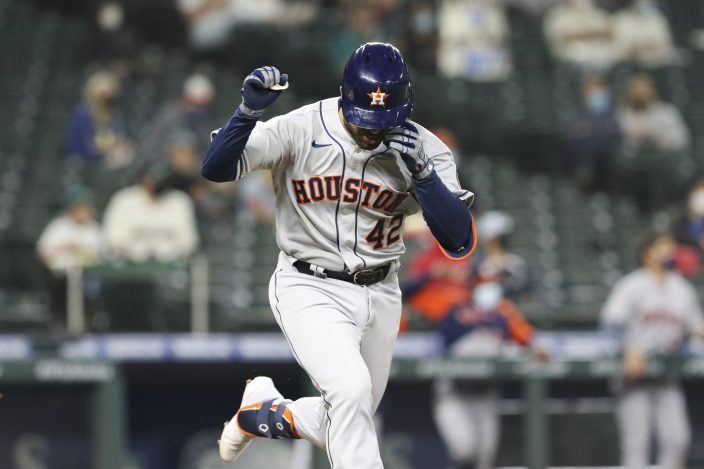 Houston Astros' Alexander De Goti runs to first on a two-run single during the fifth inning of the team's baseball game against the Seattle Mariners Friday, April 16, 2021, in Seattle. (AP PhotoJason Redmond)

Mariners: Manager Scott Servais said 2020 AL Rookie of the Year Kyle Lewis (knee) could make his 2021 debut Monday or Tuesday against the Los Angeles Dodgers. The center fielder went on the injured list with a bone bruise in his right knee suffered in spring training. ... Misiewicz (undisclosed) returned from the 10-day injured list. The Mariners optioned RHP Erik Swanson to the alternate training site.

Astros: RHP Zack Greinke (1-1, 4.08 ERA) takes the mound after giving up six runs in a loss to the Tigers on Monday, the most runs he has allowed since joining Houston in July 2019.

Mariners: RHP Chris Flexen (1-0, 4.50 ERA) makes his third start since returning to the major leagues from the Korea Baseball Organization. He hasn’t faced the Astros since 2017.