It took 4 hours, 57 minutes to decide this one, which ended early Saturday morning. The benches emptied after Dodgers reliever Dennis Santana hit Jorge Mateo with a pitch to put runners on the corners with one out in the 10th. Trent Grisham walked to load the bases, but Santana struck out Fernando Tatis Jr. to escape.

The teams met for the first time since the Dodgers swept San Diego in their Division Series last year en route to winning the World Series. The Padres responded by beefing up their rotation, trading for Yu Darvish, Blake Snell and Joe Musgrove. Darvish and Snell are scheduled to pitch in the final two games of the three-game series. Seager homered to center field, his second, with Mookie Betts on second base after making the last out of the 11th. The Dodgers added three more runs in the inning, including a sacrifice fly by reliever David Price (1-0) that was caught by Musgrove, who took over in left field after the Padres ran out of relievers.

Left fielder Jurickson Profar moved to second base as infielder Jake Cronenworth came on to pitch. He got the final two outs, including striking out Betts to end the inning. 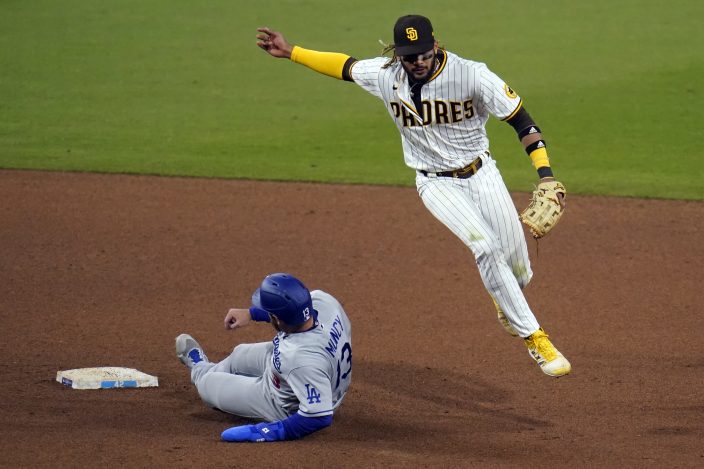 San Diego Padres shortstop Fernando Tatis Jr., right, goes over the top of Los Angeles Dodgers' Max Muncy, as Muncy slides in safely to second base during the 12th inning of a baseball game Friday, April 16, 2021, in San Diego. Los Angeles Dodgers' Chris Taylor grounded into a fielders choice, and Tatis picked up a fielding error on the play. (AP PhotoGregory Bull)

After the Dodgers went ahead 6-5 in the ninth when Justin Turner singled in Betts, the Padres tied it with two outs in the bottom half when Eric Hosmer singled home Manny Machado.

San Diego had tied the game at 5 on Profar's opposite-field, two-run double to left in the eighth inning off Corey Knebel.

Tatis returned from the 10-day injured list in a big way when he homered to center field off Walker Buehler for a 2-1 lead in the fifth. 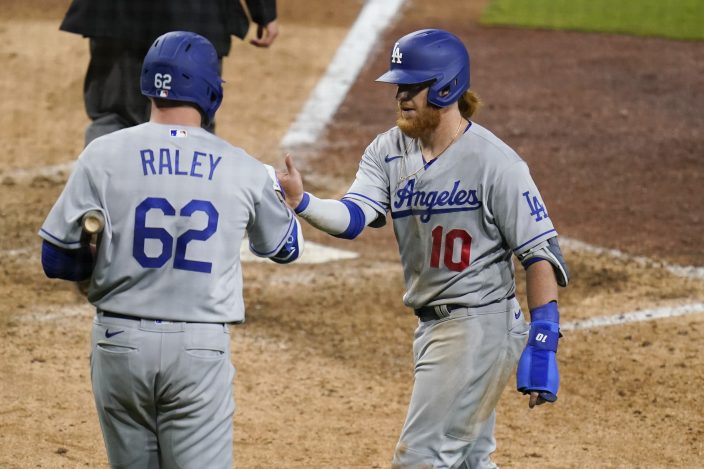 Los Angeles Dodgers' Justin Turner (10) reacts with teammate Luke Raley (62) after scoring off a single by Raley during the twelfth inning of a baseball game against the San Diego Padres, Friday, April 16, 2021, in San Diego. (AP PhotoGregory Bull)

But Tatis' throwing error from shortstop contributed to the Dodgers scoring three runs in the sixth on two singles, a walk and a wild pitch. With runners on first and third and two outs, Tatis made a nice diving stop of Chris Taylor's RBI infield single and his throw to second went past Cronenworth, who was late covering the bag. Max Muncy scored on the error and Taylor scored on Keone Kela's wild pitch for a 4-2 lead.

Zach McKinstry hit an RBI double in the eighth for a 5-3 advantage.

Padres rookie Luis Campusano hit an RBI single off Buehler in the second and Dodgers rookie Luke Raley tied it with one out in the fifth when he hit his first homer, off Dan Altavilla. Raley made his big league debut a week earlier and got his first hit Wednesday night, a double against Colorado. 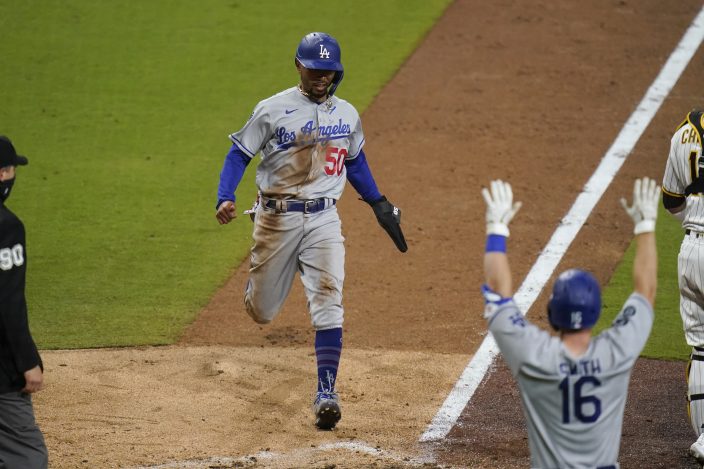 Buehler allowed two runs and seven hits in six innings while striking out four and walking one.

Padres rookie Ryan Weathers, the son of former big league pitcher David Weathers, made his first career start and held the Dodgers to one hit in 3 2/3 scoreless innings while striking out three and walking two.

Weathers made his major league debut with 1 1/3 scoreless innings in Game 1 of the NLDS when the Padres had to turn to their bullpen after Mike Clevinger left with an elbow injury. 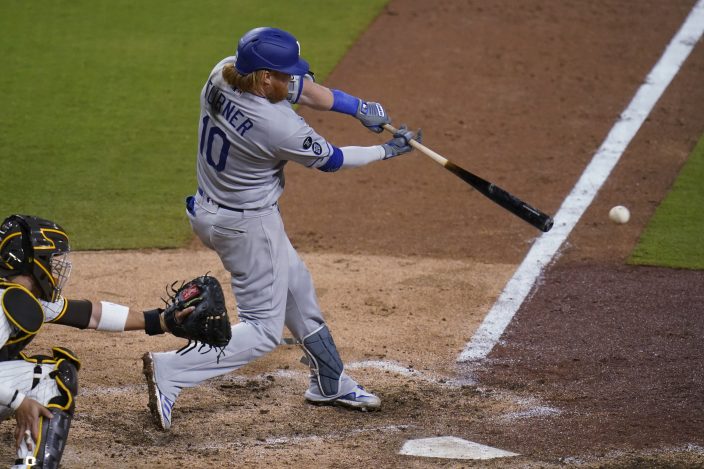 Before the game, Musgrove, who grew up in suburban El Cajon, was honored for throwing the first no-hitter in Padres history, at Texas on April 9.

“After 8,206 games, the Padres have a no-hitter, brought to us by a native son,” Padres owner Peter Seidler said during a ceremony at home plate that included Musgrove's family and girlfriend.

Musgrove was presented with a framed No. 44 jersey signed by his teammates and a check for $8,206 for his favorite charity, the Challenged Athletes Foundation.

Dodgers: CF Cody Bellinger has a hairline fracture in his left fibula. Manager Dave Roberts offered no timetable for his return. Bellinger was injured when he was spiked on a close play at first base at Oakland on April 5.

Padres: Tatis was activated from the 10-day injured list. He had been sidelined with a partially dislocated left shoulder sustained while striking out on a violent swing April 6. To make room, utility man Tucupita Marcano was optioned to the alternate training site.