ISLAMABAD — Authorities in Pakistan have decided to start vaccinating people aged 50 to 59 next week, hours after the country reported over 100 fatalities in a single day for the fifth consecutive day.

Saturday's figures bring Pakistan's death toll from the pandemic to 16,094, out of more than 750,000 total confirmed cases in the country of some 233 million people. 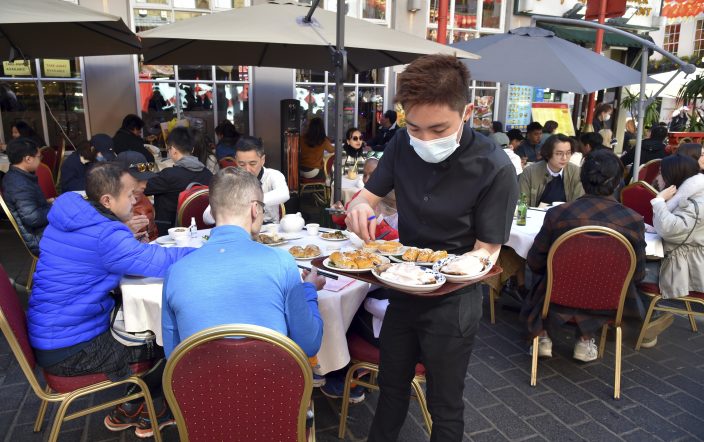 Pakistan has largely relied on donated or imported Chinese vaccines, which had been offered only to health workers and elderly people. But they have not responded in overwhelming numbers to the vaccination campaign, prompting officials to offer the vaccines to a younger cohort.

Pakistan hopes to receive 15 million COVID-19 vaccine doses through the UN-backed COVAX program by next month. 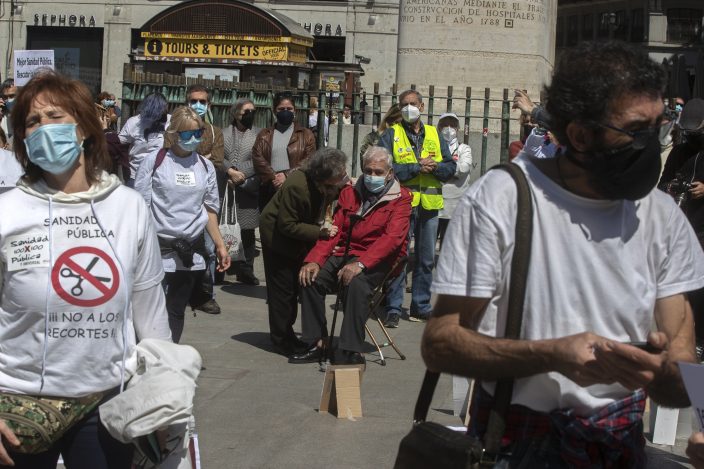 A man sits down during a protest in the central Puerta del Sol to protect the national health service during and after the pandemic, in Madrid, Spain, Saturday, April 17, 2021. Spanish Prime Minister Pedro Sanchez says he is "very hopeful" that Spain can come up with its own COVID-19 vaccine by the end of the year. (AP PhotoPaul White)

— Clammers keep digging through the pandemic, but find fewer shellfish 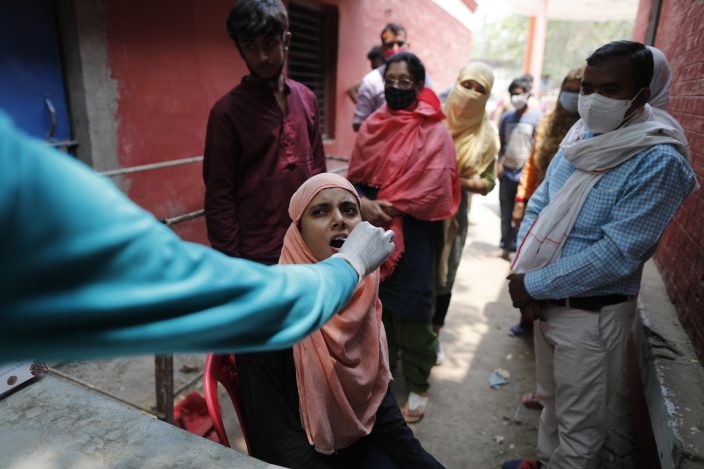 A health worker takes a swab sample to test for COVID-19 in Prayagraj, India, Saturday, April 17, 2021. The global death toll from the coronavirus topped a staggering 3 million people Saturday amid repeated setbacks in the worldwide vaccination campaign and a deepening crisis in places such as Brazil, India and France. (AP PhotoRajesh Kumar Singh)

HARARE, Zimbabwe — Zimbabwe has begun releasing about 3,000 prisoners under a presidential amnesty aimed at easing congestion to reduce the threat of COVID-19 in the country’s overcrowded jails.

About 400 prisoners were released from Chikurubi prison and other jails in the capital, Harare, on Saturday with more coming from other prisons countrywide.

Zimbabwe’s prisons have a capacity of 17,000 prisoners but held about 22,000 before the amnesty declared by President Emmerson Mnangagwa.

Those to be released had been convicted of nonviolent crimes.

The amnesty “will go a long way” to reduce expenditure and the threat of the spread of the virus in prisons, said Alvord Gapare, the commander for prisons in Harare. He said prisons in the capital had recorded 173 confirmed infections and one death.

Zimbabwe has recorded 37,534 cases of COVID-19, including 1,551 deaths by Apr. 17, according to the Africa Centers for Disease Control and Prevention.

LAS CRUCES, N.M. -- A high school in New Mexico has returned to remote learning as the school district investigates an off-campus “secret prom.”

Officials said Friday that the event in Las Cruces violated state mandates intended to curb the spread of the coronavirus.

A school district statement said a complaint submitted to the governor’s office alleged that hundreds of Mayfield High School students may have attended the unsanctioned prom held April 10. A district spokeswoman said students who attended could face repercussions ranging from academic suspensions to being barred from attending school events such as graduation.

The district said Mayfield would be on remote learning through April 26.

RICHMOND, Va. — The first cases of the so-called Brazil COVID-19 variant have been identified in two samples from residents of Virginia, state health officials said Friday.

According to the department, neither case had a record of COVID-19 vaccination prior to the onset of the illness.

ALBUQUERQUE, N.M. -- The number of new COVID-19 cases is ticking up again in New Mexico as the death toll reaches another milestone.

State health officials reported Friday that four more people have succumbed to the virus, pushing the total to 4,001 since the pandemic began last year.

While the death rate has declined dramatically since peaking in December, state officials continue to push for people to get vaccinated, saying doing so will lessen the chances of severe illness or death.

With 1,550 confirmed cases being reported over the past week, the seven-day average for new daily cases remains above the state’s target.

Amid outcry, NBC says it will not air Golden Globes in ...

The Latest: Nepal extends lockdown for capital amid surge

The Latest: Kuwait to bar unvaccinated from traveling abroad