Players on four more NFL teams will be skipping in-person voluntary workouts because of the pandemic: the Los Angeles Rams and Chargers, the Atlanta Falcons and Miami Dolphins.

The players posted through their union that they are joining 11 other groups who previously said they would not be on hand for the sessions.

This weekend players from the other 17 clubs are expected to announce plans. The offseason sessions begin Monday, and on Wednesday the league sent a memo to all 32 teams saying the first four weeks of the voluntary program will be virtual. The plan is to then transition to in-person work at team facilities. 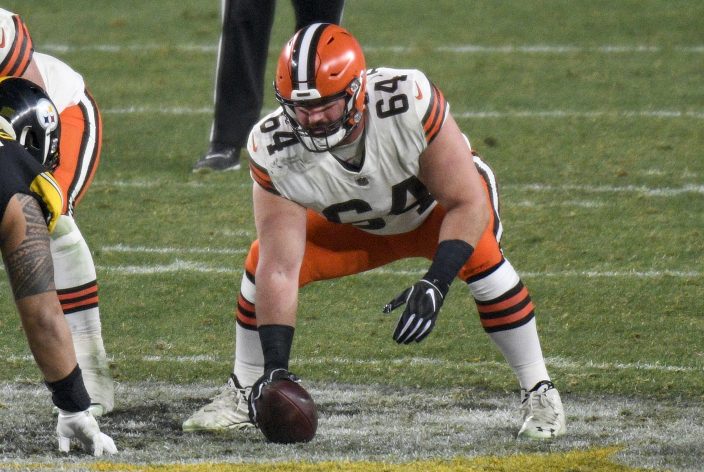 FILE - In this Jan. 10, 2021, file photo, Cleveland Browns center JC Tretter (64) snaps the ball during the first half of an NFL wild-card playoff football game against the Pittsburgh Steelers in Pittsburgh. Following the advice of Browns center and NFL Players Association President Tretter, Cleveland's players joined a list of teams who say they will skip voluntary in-person workouts this offseason. (AP PhotoDon Wright, File)

Last year, the offseason programs were all done virtually and training camp was pushed back because of the COVID-19 pandemic.

Saying no to in-person workouts earlier this week were players from the Super Bowl champion Buccaneers, Broncos, Seahawks, Giants, Bears, Raiders, Lions, Browns, Steelers and Patriots. The Jets said “many” of their players would skip them.

Following the lead of Browns center JC Tretter, the NFL Players Association's president, the Dolphins noted they would “stand in solidarity with players across the league who are making informed decisions to exercise their right to not attend voluntary in-person workouts this offseason.”

Added the Chargers: “We had a virtual offseason last year that protected us and our families from a pandemic, but also showed beneficial to our overall health and safety."

Late last month, Tretter issued a strong statement on the NFLPA website calling for the elimination of such things as organized team activities and minicamps.

“The good news for our sport is that while the NFL season looked and felt noticeably different from previous years,” he wrote, “we learned that the game of football did not suffer at the expense of protecting its players more than ever before.

"Our process is to follow the science on what is safest for our guys, and many of the changes this past year — like no in-person offseason workouts/practices, the extended acclimation period before training camp and no preseason games — gave us a year of data that demonstrates maintaining some of these changes long term is in the best interest of the game.”