Some journalists covering protests over a police shooting in suburban Minneapolis say officers have harassed and assaulted them despite a federal order to leave them alone.

U.S. District Judge Wilhelmina Wright issued a temporary restraining order Friday prohibiting police at the protests in Brooklyn Center from arresting journalists or using force against them, including flash-bang grenades, nonlethal projectiles, pepper spray and batons, unless they know the person committed a crime.

The order also prohibits police from forcing reporters to disperse along with the rest of the crowd and from seizing their equipment. 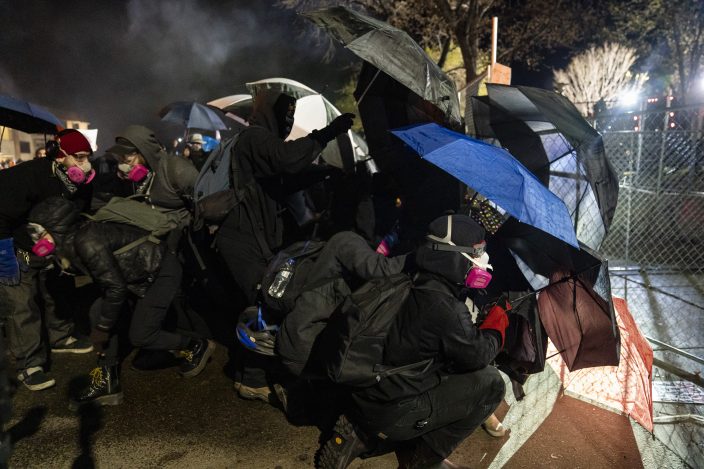 Demonstrators using umbrellas as shields approach a point in a perimeter security fence during a protest over the fatal shooting of Daunte Wright during traffic stop, outside the Brooklyn Center Police Department, Friday, April 16, 2021, in Brooklyn Center, Minn. (AP PhotoJohn Minchillo)

The protests began Sunday after Brooklyn Center Police Officer Kim Potter shot a 20-year-old Black man, Daunte Wright, during a traffic stop. The police chief said Potter, who is white, meant to use her stun gun but somehow drew her pistol instead. The chief and Potter resigned soon after, and Potter has been charged with second-degree manslaughter.

Demonstrators have gathered outside the Brooklyn Center police station every night since the shooting, frequently throwing water bottles and other objects at police behind a protective fence. Officers have responded with tear gas, rubber bullets and other projectiles at times, and have usually marched in lines to clear the area after curfew or after some protesters approached or sought to damage the fence. Their tactics have drawn criticism from Brooklyn Center Mayor Mike Elliott, who is Black, and other elected officials around the Twin Cities.

Several journalists posted photos and videos online from the protests Friday evening showing police detaining them while checking their credentials, and in at least one case spraying chemical irritant at two journalists. A freelance photographer tweeted that an officer pepper-sprayed him, punched him in the face and tore off his credentials before another officer smashed his head into the ground. 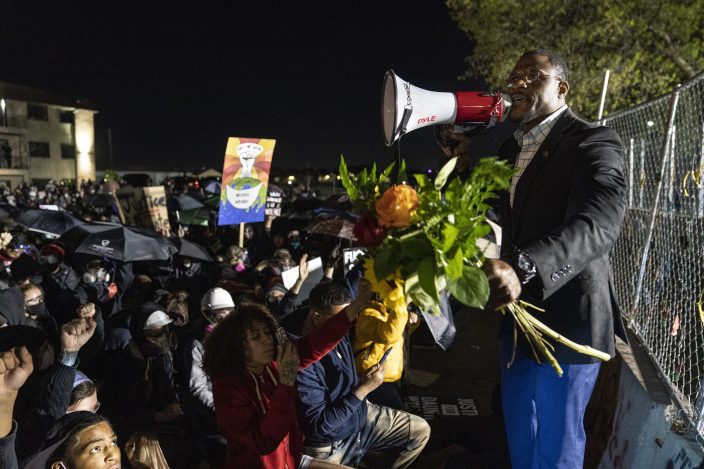 Demonstrator Michael Odiari pleas for calm during a protest over the fatal shooting of Daunte Wright after a traffic stop, outside the Brooklyn Center Police Department, Friday, April 16, 2021, in Brooklyn Center, Minn. (AP PhotoJohn Minchillo)

“We are extremely troubled by how the media is being treated and have repeatedly shared those concerns with the authorities,” said Suki Dardarian, senior managing editor and vice president at the Minneapolis Star-Tribune.

The freelance photographer didn't immediately respond to a message from The Associated Press.

Scott Wasserman, a spokesman for the Minnesota Department of Public Safety, said 136 people were arrested during Friday night's protests. None were journalists, he said. 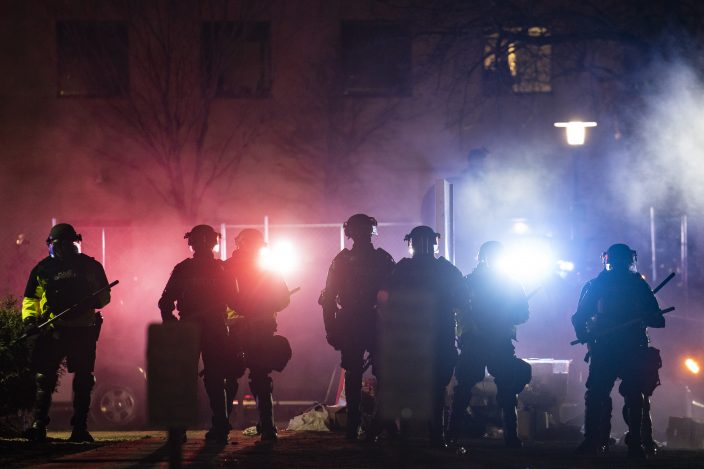 Law enforcement officers clear an area of demonstrators during a protest over Sunday's fatal shooting of Daunte Wright during a traffic stop, outside the Brooklyn Center Police Department on Wednesday, April 14, 2021, in Brooklyn Center, Minn. (AP PhotoJohn Minchillo)

He didn't respond to a follow-up message asking if officers harassed or assaulted any reporters. A demonstrator is shot with less-than-lethal marking rounds and tear gas during a standoff with police during a protest decrying the shooting death of Daunte Wright, outside the Brooklyn Center Police Department, Wednesday, April 14, 2021, in Brooklyn Center, Minn. (AP PhotoJohn Minchillo)