Steven Matz held the Kansas City Royals without a hit into the sixth inning, and Jonathan Davis and Vladimir Guerrero Jr. homered to give the Toronto Blue Jays a 5-1 victory in the seven-inning opener of their doubleheader Saturday.

Matz (3-0) only allowed a pair of walks before Nicky Lopez's blooper to left with one out in the sixth. Matz gave up Andrew Benintendi's two-out double later in the inning for the only other blemish on an otherwise dominant performance.

The left-hander, who gave way to Rafael Dolis for the seventh inning, struck out five around those two walks and two hits while allowing Kansas City to hit just five balls out of the infield. 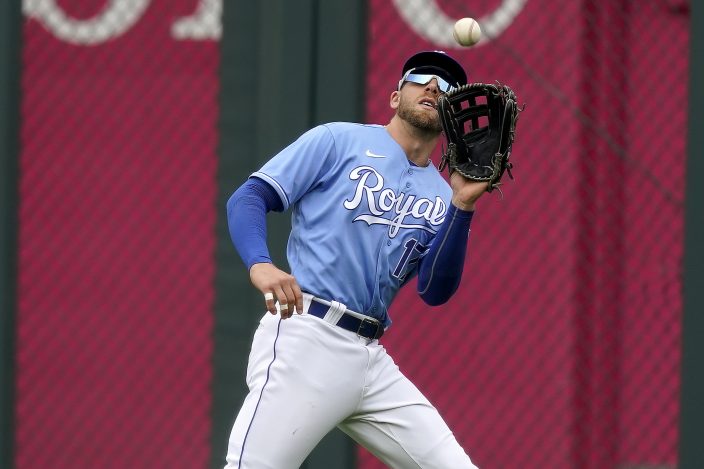 Other than a shaky first, the Royals’ Mike Minor matched Matz pitch for pitch most of the way.

Minor (1-1) retired his first two batters before Guerrero and Randal Grichuk hit back-to-back singles and Lourdes Gurriel Jr. drilled a two-run double off the wall. That was all the runs until Davis hit his first homer of the year off the left-field foul pole leading off the fifth and Guerrero tagged his second homer of the series leading off the sixth.

Even if Matz didn't allow a hit all game, his sterling start wouldn't have been an official no-hitter because teams or pitchers must play at least nine innings to qualify. The decision to shorten doubleheader games to seven innings apiece for the 2021 season means Matz and the Blue Jays would have needed at least two extra innings for it to count. 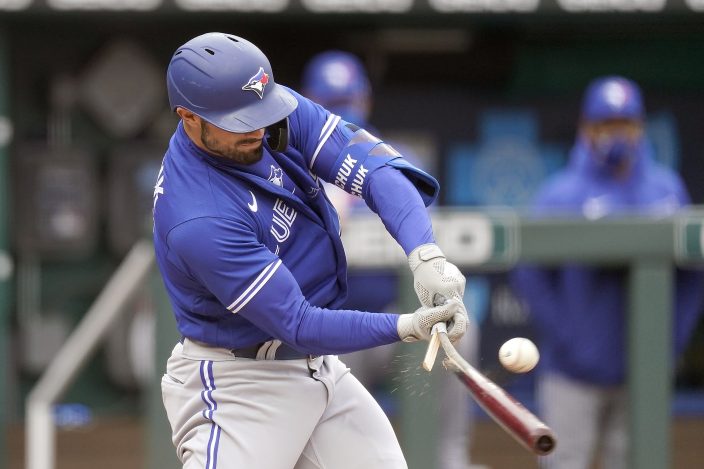 Toronto Blue Jays' Randal Grichuk breaks his bat as he hits for a single during the first inning against the Kansas City Royals in the first baseball game of a doubleheader, Saturday, April 17, 2021, in Kansas City, Mo. (AP PhotoCharlie Riedel)

Regardless, the Blue Jays were glad to have Matz's masterful performance after Friday's rainout. Their starting rotation has been shredded by injuries just three weeks into the season, including in a 7-5 loss to Kansas City on Thursday night.

In the nightcap, the Blue Jays sent Tommy Milone to the mound against the Royals' Ervin Santana. 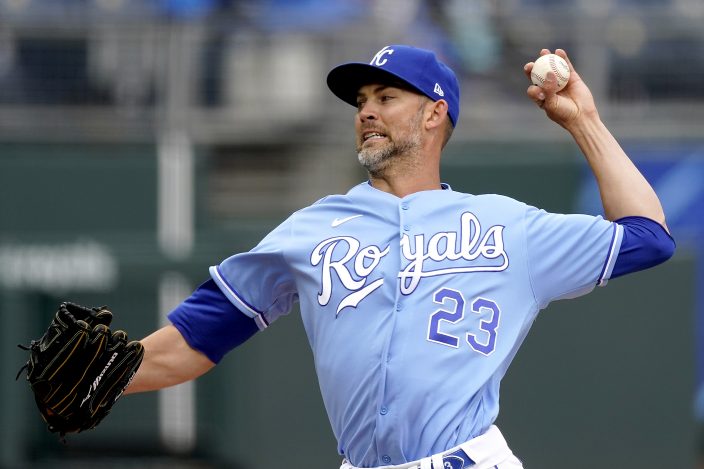 The well-traveled Santana had not taken a big league mound since April 24, 2019, with the White Sox. Santana spent the 2013 season with the Royals and was starting for them for the first time in 2,761 days.

Royals 1B Carlos Santana drew the 1,000th walk of his career leading off the seventh, joining Albert Pujols, Joey Votto and Miguel Cabrera as the only active players in the club. First base was taken out of play once he reached it. 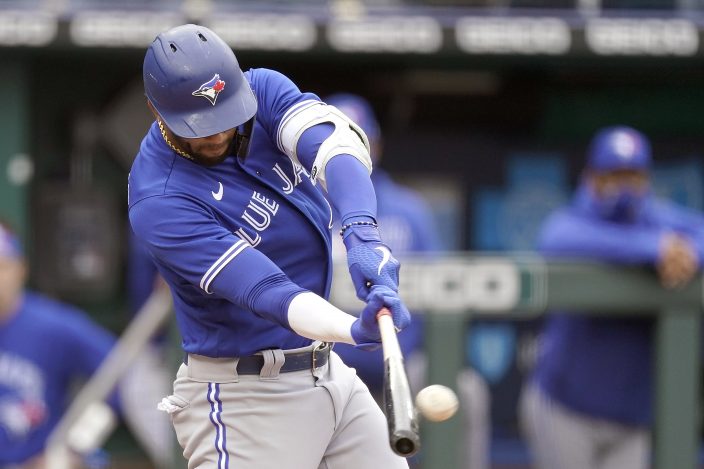 Blue Jays: OF George Springer (quadriceps and oblique) is doing some light running and will begin taking batting practice, but manager Charlie Montoyo said there is still no timeframe for his return. ... 3B Cavan Biggio could play Sunday after taking a line drive off his hand in the series opener.

The Blue Jays recalled INF Santiago Espinal to serve as their 27th man for the doubleheader. The Royals opted to recall LHP Richard Lovelady to provide some depth in their taxed bullpen.

The Royals traded OF Nick Heath to the Diamondbacks for minor league RHP Eduardo Herrera. Heath had been designated for assignment earlier in the week. The 21-year-old Herrera has yet to pitch above Class A as a professional.

The Blue Jays send LHP Robbie Ray (0-1, 3.60 ERA) to the mound against Royals RHP Brady Singer (0-2, 6.48) in the series finale Sunday. Ray and Singer were supposed to pitch Saturday before rain Friday forced the doubleheader.