The Yankees dropped to an AL-worst 5-9, the latest into a season New York is at the bottom of the league since a 9-17 start in 1991, per Elias Sports. Fans in the Bronx again booed the Bombers, but they were more restrained a day after some hurled baseballs and other items on the field late in an 8-2 loss to the Rays.

Francisco Mejía hit a solo shot in the second off Jordan Montgomery (1-1), and Margot made it 3-1 with his homer off the left-hander in the fourth. Joey Wendle added a two-run shot against Jonathan Loaisiga in the seventh, and Mejía had an RBI double in the ninth. 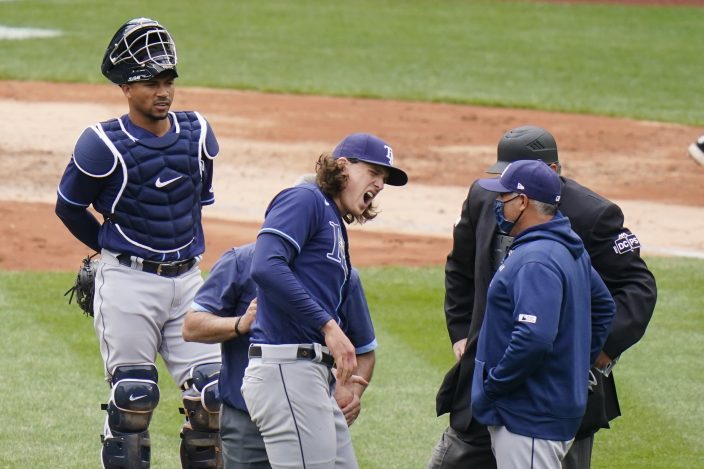 Rougned Odor hit his first homer with the Yankees, a solo shot in the seventh off Jeffrey Springs, and Aaron Judge added an RBI single as New York tried to rally against the bullpen. Sidewinding right-hander Ryan Thompson got the ball to Diego Castillo in the ninth, though, and Castillo closed out his fourth save with a 1-2-3 inning.

The Rays (7-8) won their second straight in this series after enduring a 3-8 stretch. The reigning AL champions are 4-1 against the Yankees this season and 7-1 in the Bronx since the start of 2020. The Rays have won seven straight series against the Yankees, including last year's Division Series.

New York catcher Gary Sánchez was hit in his right throwing hand by a foul ball in the fourth and exited an inning later. The club said X-rays were negative and that Sánchez is day to day with a contusion on his right index and middle fingers. 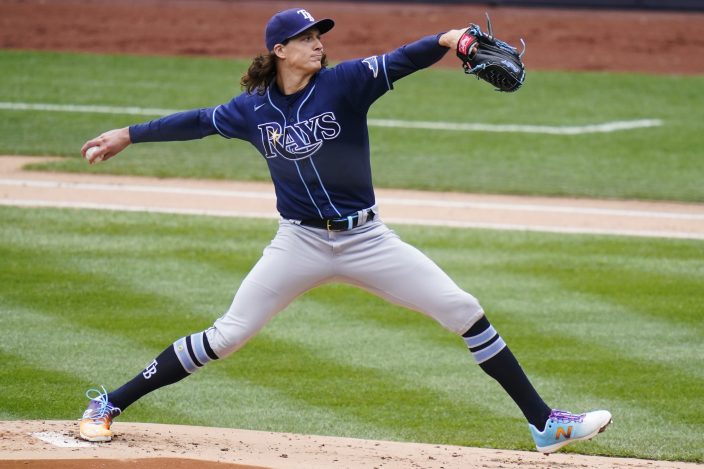 Glasnow (2-0) entered with 29 strikeouts and three walks over 19 2/3 innings this season, but his feel was off from the start. He walked four but also struck out seven and limited New York to two hits.

The 6-foot-8 right-hander labored early but stranded the bases loaded in the first. He finally seemed to have found his form when play was stopped in the fifth as he appeared to get a painful cramp in his left hand. Teammates brought him water and hydration gels, which he guzzled behind the mound while stretching his left thumb.

Glasnow walked DJ LeMahieu when play resumed but then struck out Judge and Giancarlo Stanton while getting three straight outs, ending his day after 105 pitches. 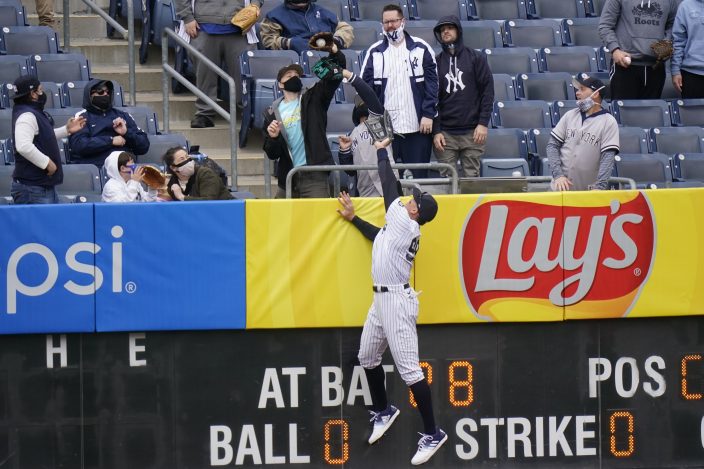 The Yankees got a verbal lashing from manager Aaron Boone after Friday's loss but didn't seem any more inspired early on Saturday. New York warmed up with infield work instead of batting practice a day after committing three errors, and while the defense improved, but the bats remained an issue.

Limited to three hits Friday, New York got only a single each from LeMahieu and Aaron Hicks over the first six innings. The Yankees left seven on base and went 1 for 7 with runners in scoring position, dropping to 20 for 90 (.222) this season with men on second or third.

Montgomery, usually effective keeping the ball in the park, was undone by a pair of Rays homers for the second straight start. They were the only two hits he allowed, but he was charged with four runs in six-plus innings, walking two and striking out seven on 86 pitches. 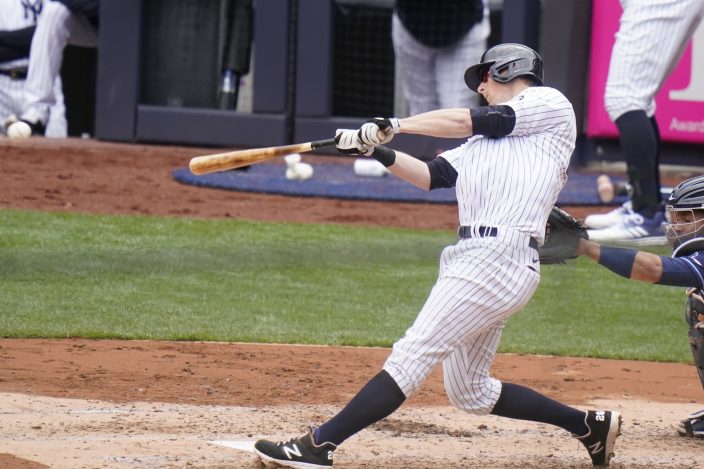 Rays manager Kevin Cash had a concise scouting report on Bronx fans who threw objects on the field Friday.

“I didn’t see that many good arms, so I wasn’t overly concerned,” he said.

Rays: OF Kevin Kiermaier (strained left quadriceps) was activated before the game. He had been out since April 5 but took simulated at-bats before the game and was deemed ready. He entered as a defensive replacement in the eighth. ... RHP Chris Mazza was optioned to the alternate site. ... C Mejía was twice shaken up after being hit in the mask by foul balls but remained in the game.

Yankees: 1B Luke Voit (partial left knee meniscus tear) fielded grounders pregame and is expected to begin hitting Monday. Manager Aaron Boone said there still is not a timeline for Voit's return, but the club is pleased with his progress.

Cole faces Tampa Bay on Sunday for the first time since last year's AL Division Series, when he allowed a run over 5 1/3 innings in a 2-1, Game 5 defeat. The Rays planned to name a starter or opener after Saturday's game.