Yan Gomes homered, drove in two runs and became the first major league catcher to throw out Tim Locastro on a steal attempt after 29 consecutive swipes to start his career, helping the Nationals beat the Arizona Diamondbacks 6-2 for their first back-to-back wins this season.

Gomes entered Saturday without an extra-base hit and just one RBI in 2021, but he went 3 for 4 at the plate.

With help from a terrific tag by Starlin Castro, Gomes also ended the Locastro's perfect record on the basepaths, the most successful steal attempts in a row at the beginning of an MLB career in at least 70 years. 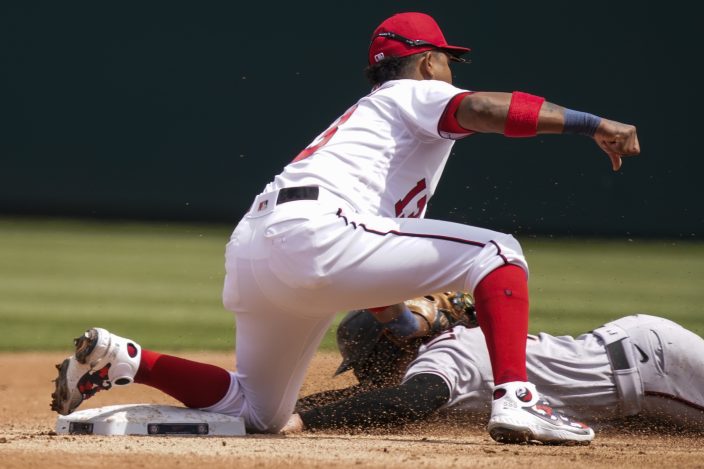 Arizona Diamondbacks' Tim Locastro is out on the steal attempt with the tag from Washington Nationals second baseman Starlin Castro during the third inning of a baseball game at Nationals Park, Saturday, April 17, 2021, in Washington. Locastro injured his finger and left the game. (AP PhotoAlex Brandon)

The Hall of Fame asked for Locastro's spikes last weekend after he set the record. He was thrown out making a dive into second base in the third inning and left the game with a dislocated left pinkie finger.

Erick Fedde (1-1) tied his career high with nine strikeouts in five innings for Washington, which is 5-7. He gave up five hits and one run, via Kole Calhoun's solo shot in the third right after Gomes got Locastro at second base.

Gomes, who missed the start of the season because of COVID-19 protocols, matched that deep shot in the bottom half, driving a 93 mph fastball from Luke Weaver (1-1) over the fence. 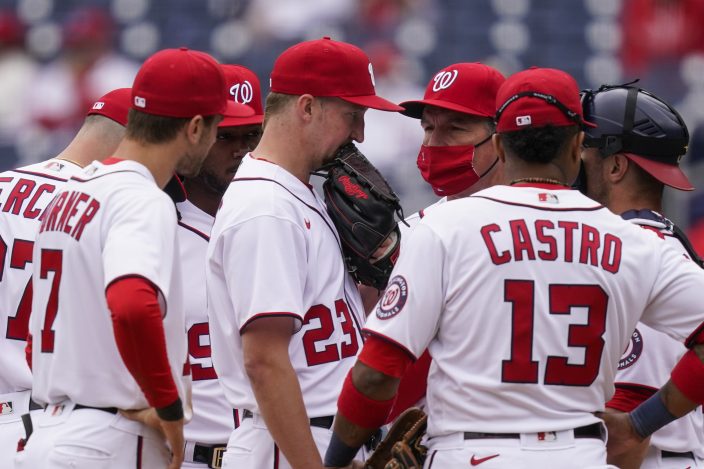 Washington Nationals relief pitcher Erick Fedde (23) talks with pitching coach Jim Hickey, third from right, and others during the fifth inning of a baseball game against the Arizona Diamondbacks at Nationals Park, Saturday, April 17, 2021, in Washington. (AP PhotoAlex Brandon)

Washington went up 4-1 with a three-run fourth. Consecutive doubles by Castro and Andrew Stevenson broke the tie, Gomes followed with an RBI single, and Juan Soto tacked on a bases-loaded sacrifice fly.

Washington's Ryan Zimmerman produced a pinch-hit homer in the eighth. Kyle Schwarber — whose upper-deck shot in the ninth ended the Nationals' 1-0 victory Friday — and Trea Turner had three hits apiece. 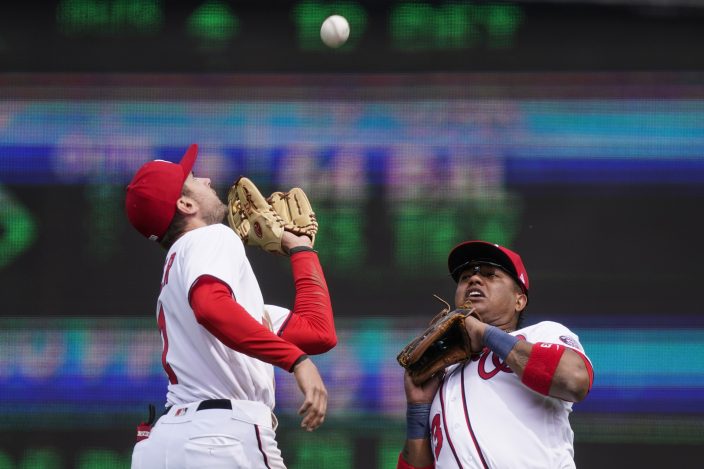 Eduardo Escobar hit his sixth homer of the year for Arizona, which has dropped four of its last five games.

Reliever Wander Suero, making his eighth appearance in Washington’s 12 games, left after 13 pitches in the ninth inning following a visit to the mound by the trainer.

It wasn’t immediately clear what was wrong with Suero, who walked the first batter he faced and left with an 0-2 count on the next. 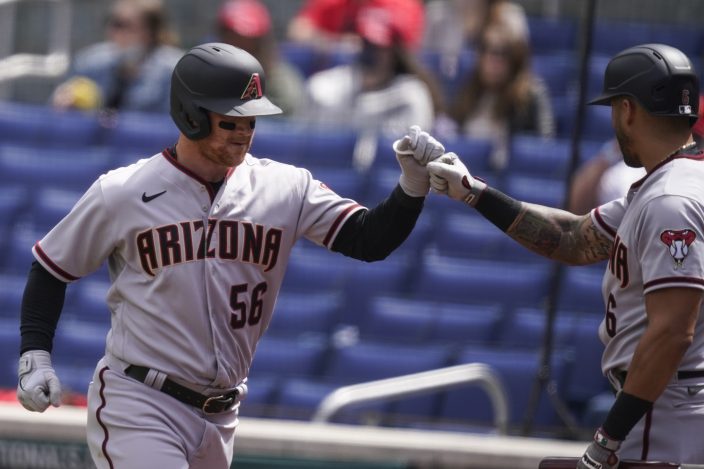 Kyle McGowin came in and got the last three outs.

Arizona picked up OF Nick Heath from Kansas City in a trade that sent minor league RHP Eduardo Herrera to the Royals. The Diamondbacks designated RHP Jeremy Beasley for assignment.

Nationals: LHP Luis Avilán, 31, has a torn ligament in his pitching elbow, “so he's weighing his decision on what to do,” manager Dave Martinez said. Avilán, who went on the IL on Friday, could have Tommy John reconstructive surgery or “sit out and see if it heals,” Martinez said, adding: “We were shocked.” Avilán threw 38 pitches Tuesday and 39 Thursday, his most since 40 in a 2017 game. Otherwise, he hadn’t exceeded 37 pitches since the first three appearances of his career in 2012. ... 2B Josh Harrison felt “a little stiffness in his back” after Friday's game, according to Martinez, so was out of the lineup.

The four-game series ends Sunday with a pitching matchup between past World Series MVPs who are struggling so far this season: Washington RHP Stephen Strasburg (0-1, 6.30 ERA) vs. Arizona LHP Madison Bumgarner (0-2, 11.20). Strasburg starred in the Fall Classic for the Nationals in 2019; Bumgarner led the San Francisco Giants to the 2014 title.