Tristan Jarry stopped 27 shots and the Pittsburgh Penguins jumped into second place in the East Division standings with a 3-2 win over Buffalo, eliminating the Sabres from playoff contention on Saturday.

Bryan Rust and Evan Rodrigues scored second-period goals in helping the Penguins improve to 10-2-2 in their past 14. Jared McCann also scored for Pittsburgh, which earned its 59th point to move one ahead of the idle New York Islanders, and remain three behind the Washington Capitals. 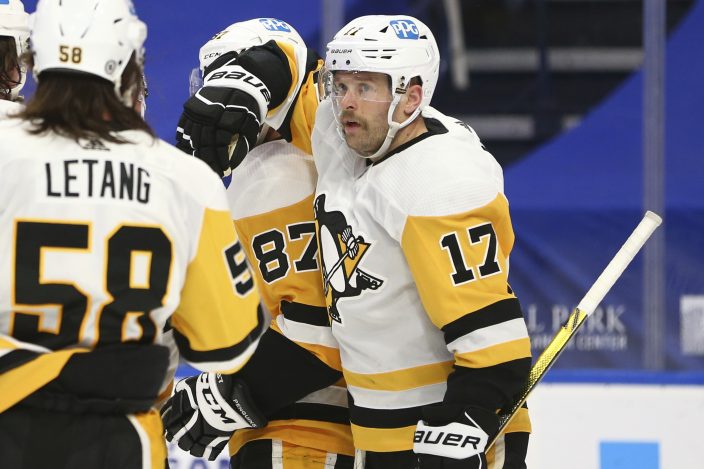 The New York Rangers’ win in over New Jersey earlier in the day combined with Buffalo’s loss made the Sabres the NHL’s fist team eliminated from playoff contention with some three weeks left in the 56-game shortened season. Buffalo matched the league record in extending its playoff drought to a 10th consecutive year.

Tage Thompson and Casey Mittelstadt scored for Buffalo, which is 5-3-2 since snapping an 18-game winless streak.

Dustin Tokarski stopped 38 shots in the loss, coming two days after picking up his first win in more than five years with a 27-save outing in a 5-2 victory at Washington. 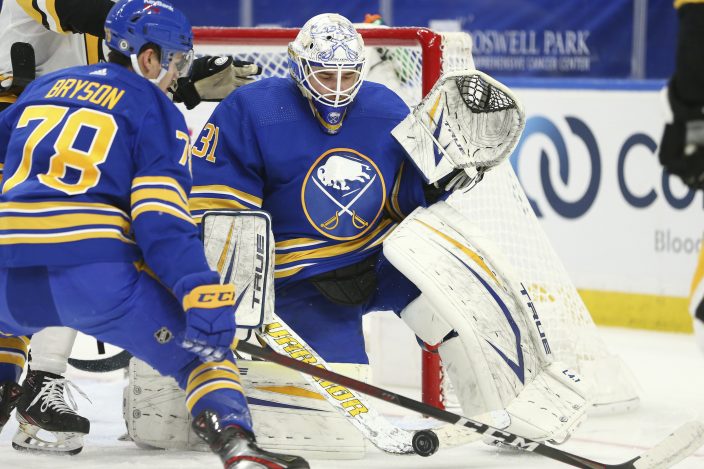 Buffalo Sabres goalie Dustin Tokarski (31) makes a save during the second period of an NHL hockey game against the Pittsburgh Penguins, Saturday, April 17, 2021, in Buffalo, N.Y. (AP PhotoJeffrey T. Barnes)

The teams complete their two-game series in Buffalo on Sunday.

Rust’s goal stood as the winner, coming on the power play to put the Penguins up 3-1 in the second period. Rust was parked in front of the net where he tapped in Sidney Crosby’s pass from the left circle.

The Sabres didn’t back down despite mounting injuries in twice cutting the Penguins' two-goal lead to one. Thompson briefly cut the lead to 2-1 earlier in the second period, and 44 seconds after Rodrigues’ goal. 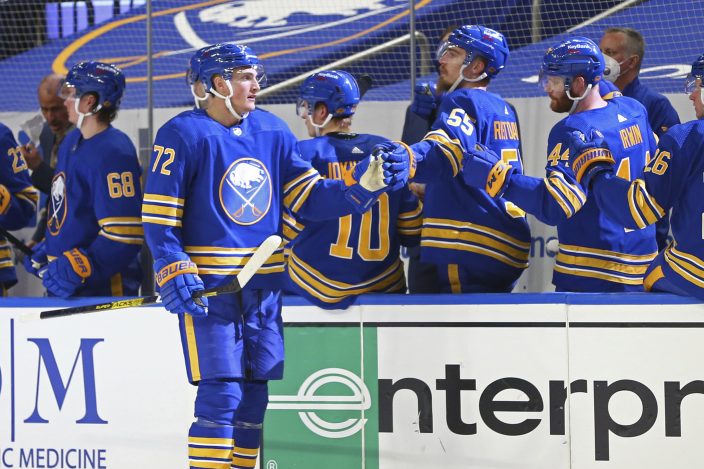 Mittelstadt made it 3-2 by scoring a power-play goal with 8:16 left, when he was set up by Rasmus Ristolainen’s pass into the slot.

Buffalo nearly tied the game with 2:21 left when Sam Reinhart, parked in front, directed a rebound that dribbled off the right post before Jarry covered it. 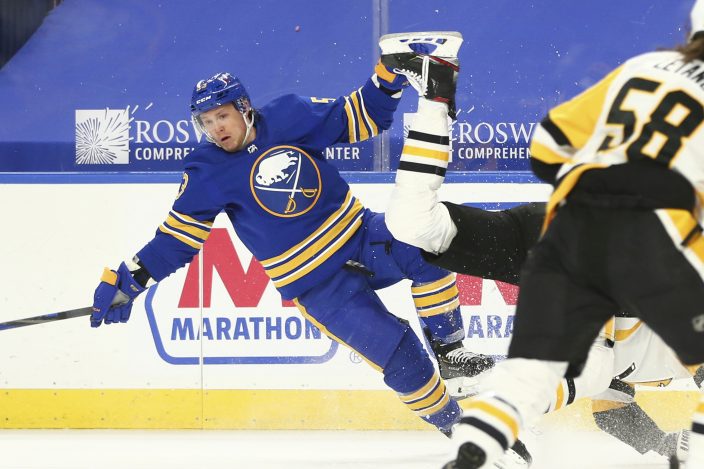 The Penguins thoroughly dominated the opening period in which they had a 12-3 edge in shots and took a 1-0 lead on McCann’s goal midway through. Tokarski stopped Mike Matheson’s point shot and steered it into the left corner, where McCann collected the loose puck and banked in a shot from behind the goal line off the goalie.

Both teams participated in pre-game warmups wearing jerseys with rainbow-colored numbers on the back, sticks bearing rainbow-colored tape, and using commemorative pucks with multi-colored designs.

The items are to be auctioned off, with proceeds going to the Pride Center of Western New York and GLYS.

The teams donated 100 tickets to LGBTQ-plus organizations, and each fan received a rainbow-colored rally towel. The Buffalo Gay Men’s Chorus performed the Canadian and U.S. anthems.

Penguins D Brian Dumoulin had his career-best point streak snapped at six games. Crosby’s assist on Rust’s goal extended his streak to four games, in which he has two goals and four assists.

The Sabres announced before the game that veteran forward Kyle Okposo will miss the remainder of the season after having surgery to repair a broken left cheekbone. Okposo was hurt when being struck by teammate Matt Irwin’s shot in the first period at Washington on Thursday.

Sabres top prospect goalie Ukko-Pekka Luukkonen was added to the taxi squad with the plan he’ll make his NHL debut at some point in the coming week. Aside from being minus starter Linus Ullmark, who could miss the remainder of the season, Buffalo’s backup Carter Hutton is also sidelined with a lower-body injury.

Buffalo selected the Finnish-born Luukkonen with the 54th pick in the 2017 draft.