New York lost its seventh straight series to the Rays is last this late in the season for the first time since 1991, per Elias Sports. Fans in the Bronx again booed the Bombers, but they were more restrained a day after some hurled baseballs and other items on the field late in an 8-2 loss to the Rays.

Francisco Mejía hit a solo shot in the second off Jordan Montgomery (1-1), and Margot made it 3-1 with his homer off the left-hander in the fourth. Joey Wendle added a two-run shot against Jonathan Loaisiga in the seventh, and Mejía had an RBI double in the ninth. 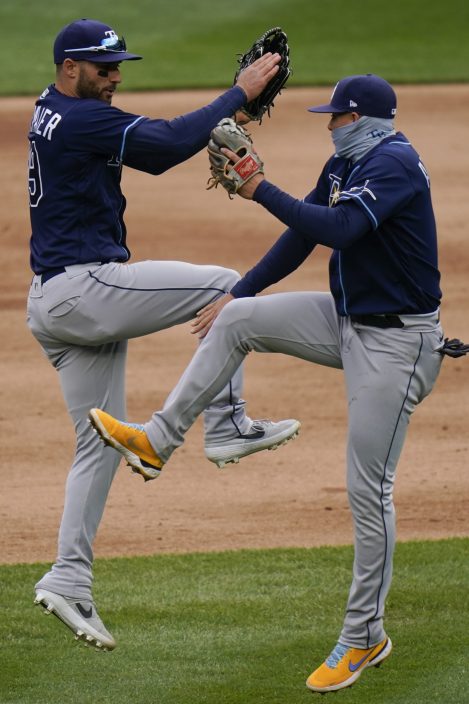 Glasnow (2-0) walked four but also struck out seven and limited New York to two hits as the Rays (7-8) won their second straight in the series.

Kris Bryant and Willson Contreras each homered twice on an afternoon when Atlanta returned Sean Kazmar Jr. to the major leagues for the first time in 13 years.

Javier Báez and David Bote also homered for the Cubs. who stopped a three-game losing streak. Chicago entered hitting a major league-worst .166 and then took an 11-0 lead in the fifth.

Atlanta selected the contract of Kazmar, a 36-year-old infielder, from its alternate training site before the game. He pinch hit in the fifth inning grounded into a 4-6-3 double play. Kazmar had not played in the major leagues since Sept. 23, 2008, with the San Diego Padres.

The gap between big league appearances was the greatest since that of right-hander Ralph Winegarner, according to Elias Sports Bureau. Winegarner played on June 23, 1936, for the Cleveland Indians and did not return to the majors until July 7, 1949, with the St. Louis Browns — a span of 13 years and 14 days.

Yan Gomes homered off Luke Weaver (1-1), drove in two runs and became the first major league catcher to throw out Tim Locastro on a steal attempt after 29 consecutive swipes to start his career, and Washington strung together consecutive wins for the first time this season.

Locastro was thrown out making a dive into second base in the third inning and left the game with a dislocated left pinkie finger.

Erick Fedde (1-1) tied his career high with nine strikeouts in five innings for Washington, which is 5-7. He gave up one run and five hits.

Steven Matz (3-0) held the Kansas City Royals without a hit into the sixth inning, and Jonathan Davis and Vladimir Guerrero Jr. homered off Mike Minor (1-1) in the seven-inning doubleheader opener.

Matz allowed only a pair of walks before Nicky Lopez’s blooper to left with one out in the sixth. Matz gave up Andrew Benintendi’s two-out double later in the inning and wound up pitching six innings with five strikeouts.

TV's growth is a boon for 'diverse voices ...