Jackie Bradley Jr. hit a leadoff single in the first inning and the Brewers went on to score five times, with every run coming with two outs. Bradley, who had three hits, tripled and scored in the second as Milwaukee made it 7-0.

Anderson (2-1) and Pittsburgh starter Trevor Cahill (0-2), both 33 and having started their major league careers in 2009, made their third starts of the season. They had had rough first starts, but in their second outings, both gave up just one run in five innings. 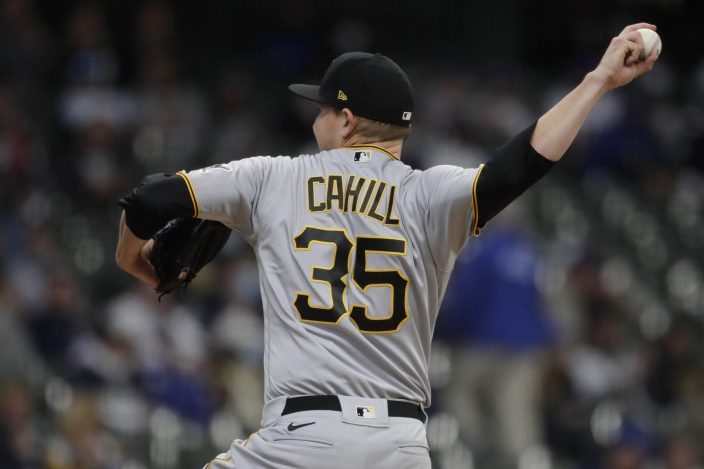 Anderson allowed one unearned run and six hits, walking one and striking out three. The Pirates' run scored on one of three throwing errors by shortstop Luis Urías.

Cahill, signed as a free agent on March 21 and playing for his eighth team since 2015, retired the last seven hitters he faced before his outing ended after four innings. 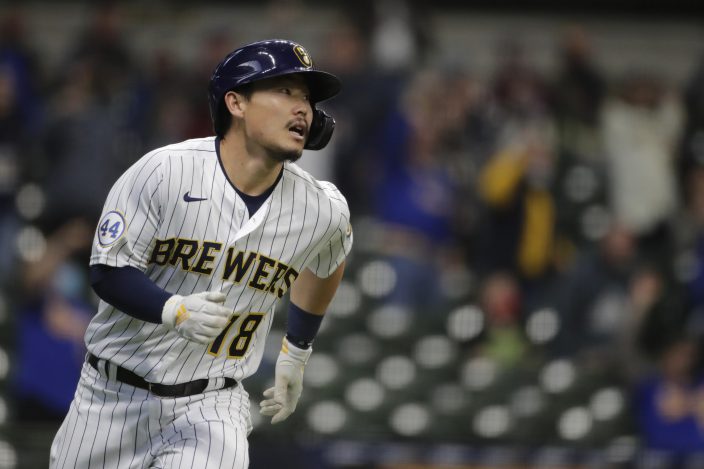 Milwaukee Brewers' Keston Hiura watches after hitting an RBI-double during the second inning of a baseball game against the Pittsburgh Pirates, Saturday, April 17, 2021, in Milwaukee. (AP PhotoAaron Gash)

Pittsburgh coaxed across its run in the fourth. Bryan Reynolds singled, took second on a passed ball and later scored when Urías threw away a grounder by Jacob Stallings.

The Brewers, who have made the playoffs the past three seasons, prevailed despite putting Christian Yelich, the 2018 NL MVP, being put on the 10-day injured list with a sore back. 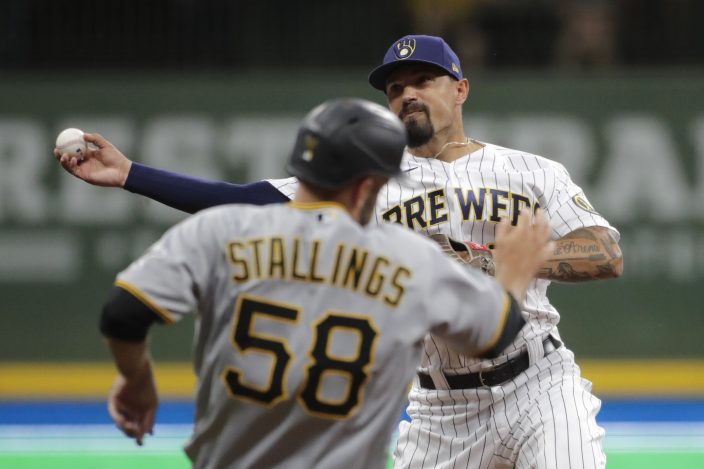 Milwaukee Brewers' Jace Peterson throws to first base to turn a double play after tagging out Pittsburgh Pirates' Jacob Stallings (58) at second base during the fourth inning of a baseball game Saturday, April 17, 2021, in Milwaukee. (AP PhotoAaron Gash)

The Pirates, who finished last in the NL Central in 2020 and 2019, had won five of their past seven.

Pirates: 3B Ke’Bryan Hayes (left wrist strain), a preseason favorite for NL Rookie of the Year, has been on the 10-day injured list since April 4. The son of 14-year big leaguer Charlie Hayes hit .376 with five home runs in 24 games in 2020. Hayes did some hitting on the field Saturday for the first time, manager Derek Shelton said.

Brewers: RHP Eric Yardley was recalled from the organization’s alternate training site in Appleton, Wisconsin, due to the injury to Yelich, and pitched the eighth. Yelich, who had missed four straight games, is the third starter, along with 2B Kolten Wong and OF Lorenzo Cain, currently sidelined. Wong (left oblique strain), the lead-off hitter in each game he has started in 2021, was put on the 10-day injured list on April 10. The former Cardinal, a Gold Glove winner in 2019 and 2020, was signed as a free agent in February. ... Cain (left quadriceps discomfort) has been on the 10-day injured list since April 14. He’s hitting .154 with two home runs. ... “We’ll just have to fill in around them until those guys get back. We’re not expecting this to be long term,” manager Craig Counsell said.