A look at what's happening around the majors on Sunday:

The Minnesota Twins will see when they can next play after their COVID-19 problems wiped the rest of a series in Anaheim against the Angels. 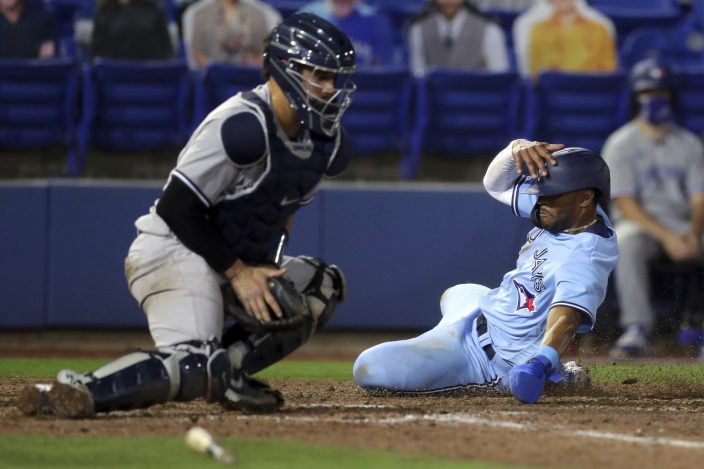 Games on Saturday night and Sunday were called off. Outfielder Kyle Garlick, another undisclosed Twins player and a team staff member tested positive in the two days before the postponements, manager Rocco Baldelli said. Shortstop Andrelton Simmons already hadn’t made the trip after testing positive early in the week, and he hadn’t been around the team since Tuesday.

“There’s not one person in our group who’s not frustrated,” Baldelli said. “Does everyone have that general frustration just having to deal with this in a grander sense? Absolutely. And then there are probably people who are frustrated about particular aspects of that.”

The Twins are scheduled to play Monday night at Oakland.

There have now been five games postponed this season because of the virus, including three between Washington and Mets because of Washington’s trouble. There were 45 regular-season games postponed for virus-related reasons last year, but only two — between St. Louis and Detroit — were not made up.

Sean Kazmar Jr. will see when his next opportunity comes to play for the Atlanta Braves. Then again, he’s already at pro at waiting for second chances.

In his first big league game since Sept. 23, 2008, Kazmar grounded into a double play as a pinch-hitter Saturday at Wrigley Field.

“Definitely everything and then some,” the 36-year-old infielder said. “What an amazing feeling.”

Kazmar’s only previous season in the majors was with San Diego in 2008, when he hit .205 in 19 games. Since then, then played 1,106 games in Triple-A and Double-A for the Padres, Mariners, Mets and Braves.

Kazmar hit .409 in spring training with the Braves, with three home runs in 22 at-bats. His gap of over 12 1/2 between big league games was the greatest since that of pitcher Ralph Winegarner, according to Elias Sports Bureau -- Winegarner played in 1936 for Cleveland and didn’t return to the majors until over 13 years later, in 1949 with the St. Louis Browns.

Manuel Margot and the Rays won in the Bronx on Friday and Saturday, limiting the Bombers to five runs and eight hits. The Rays will use opener Andrew Kittredge (2-0).

New York catcher Gary Sánchez won’t start but could be available a day after being hit by a foul ball in his right hand. X-rays were negative and the team said he’s day to day with a contusion on his right index and middle fingers. Kyle Higashioka was already lined up to catch Cole, but manager Aaron Boone expects Sánchez to be available when the team plays next on Tuesday against Atlanta.

Oakland has won seven in a row, thanks to back-to-back shutouts against the Tigers.

The last time the A’s blanked Detroit on consecutive days was in June 1973 when Ken Holtzman and Catfish Hunter did it on Oakland’s way to the second of three straight World Series championships.

The Athletics have won 21 of the last 22 overall from the Tigers.

Nationals lefty Luis Avilán has a torn ligament in his pitching elbow, “so he’s weighing his decision on what to do,” manager Dave Martinez said. The 31-year-old Avilán could have Tommy John surgery or “sit out and see if it heals,” Martinez said, adding: “We were shocked.”

Avilán threw 38 pitches Tuesday and 39 Thursday, his most since 40 in a 2017 game. Otherwise, he hadn’t exceeded 37 pitches since the first three appearances of his career in 2012.

LEADING OFF: Bumgarner back on mound; Bieber-Keuchel matchup