Greinke allowed four hits and walked none. He struck out six, two of them on 67 mph curveballs.

Ryan Pressly pitched the ninth for his first save. 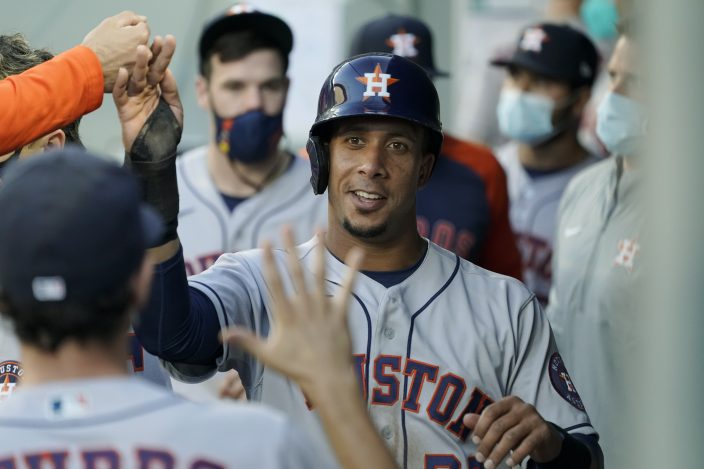 Houston Astros' Michael Brantley is greeted in the dugout after he scored on a single by Taylor Jones during the fourth inning of the team's baseball game against the Seattle Mariners, Saturday, April 17, 2021, in Seattle. (AP PhotoTed S. Warren)

Jones, from nearby Kent, Washington, hit an RBI single with two outs in the fourth. He's been pressed into service after five Astros – including starters José Altuve, Alex Bregman and Yordan Álvarez – were moved to the injured list due to COVID-19 protocols on Wednesday.

Greinke, a six-time Gold Glove, made a brilliant defensive play in the fifth when he gathered in J.P. Crawford’s hard grounder, freezing two runners on base, then threw to third to start a double play.

Greinke finished the game with 2,705 career strikeouts. His teammate, Justin Verlander (18th at 3,013), and the Washington Nationals’ Max Scherzer (22nd at 2,808) are the only active players ahead of him on the career list. 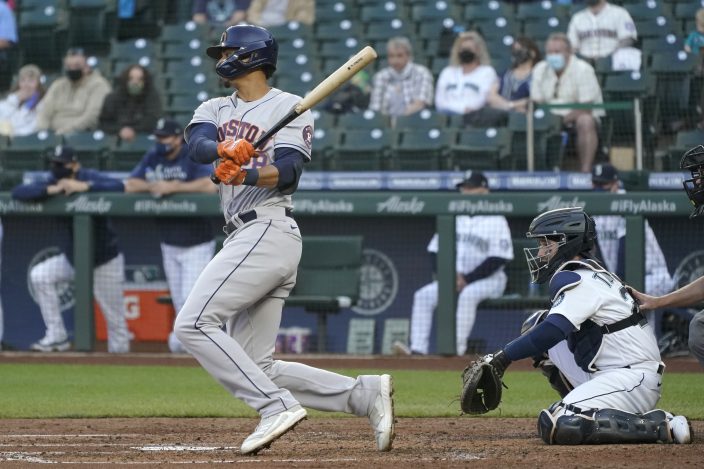 Chris Flexen (1-1) picked up the loss as Houston snapped Seattle’s three-game winning streak. He allowed 10 hits through six innings, striking out three with no walks.

Astros: Manager Dusty Baker said starting pitcher Lance McCullers Jr. might not make his scheduled start April 21 at Colorado due to the lingering effects of his COVID-19 vaccine. 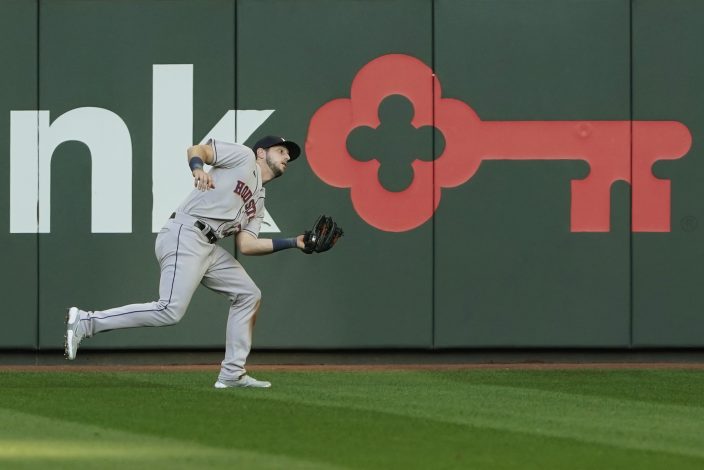 “He’s feeling better, but he’s still not 100 percent,” Baker said. “If you’re not 100 percent and having trouble breathing, Colorado is not the place to get your breath back.”

Baker had no new update on the five players who were put on the injured list due to COVID-19 protocols, but did say he now does not expect them to play through the end of Houston’s five-game road trip to Seattle and Colorado. The team returns home April 22.

Mariners: Manager Scott Servais called a Saturday informational meeting with Dr. Vin Gupta “fantastic” and “very impactful,” and hopes Seattle will reach an 85 percent vaccination rate, the level at which MLB officials will relax some restrictions. Gupta, who became a go-to television personality during the pandemic, is Amazon’s principal scientist and a professor of health metrics sciences at the University of Washington’s Institute for Health Metrics and Evaluation.

Astros: LHP Blake Taylor will go to the 10-day injured list, Baker said. Taylor rolled his right ankle while trying to make a scoop-toss at first base on a chopper from Taylor Trammell in Friday night’s 6-5 loss to the Mariners. It was his seventh appearance of the season, tied for the team lead.

“Hopefully he’s a quick healer because we need him,” Baker said.

Taylor will be replaced on the roster by RHP Peter Solomon, a projected starting pitcher who likely will now make his major league debut out of the bullpen. Baker said Solomon pitched out of the bullpen in college and held closing duties as well, and doesn’t believe he’ll struggle in the role. Solomon had Tommy John surgery in 2019 and did not pitch last season.

Astros: RHP Jake Odorizzi (0-1, 13.50) closes out the Seattle series after he gave up five runs on seven hits over 3 1/3 innings in his season-opening appearance Tuesday at Detroit.

Mariners: LHP Nick Margevicius (0-1, 7.04) returns to the mound after giving up six runs (two earned) in a loss to Baltimore on Tuesday.