Aaron Nola struck out 10 and threw a two-hitter for his first nine-inning shutout in the majors, leading the Philadelphia Phillies to a 2-0 win over the St. Louis Cardinals on Sunday.

Bryce Harper homered and had three hits for the Phillies.

Nola threw a pair of doubleheader-shortened complete games last season, including a shutout. But he never pitched into the ninth inning over his first 142 career starts. 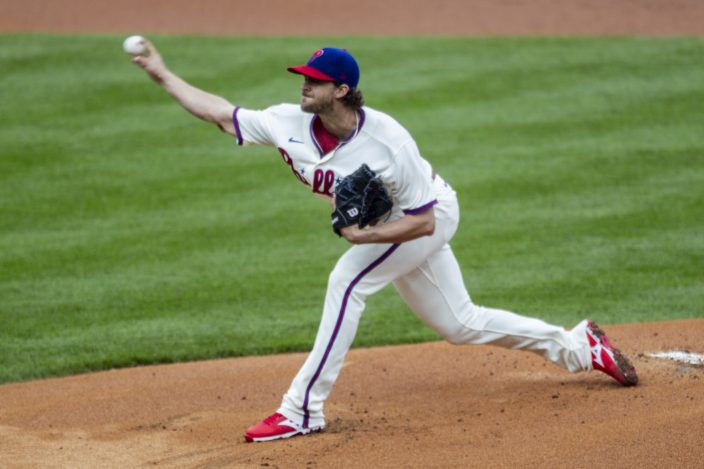 First baseman Rhys Hoskins tossed Nola the ball and saluted the righty after the final out. Nola (1-1) threw 109 pitches and did little more than give a small fist bump when he completed the milestone.

Nola pitched like the ace the Phillies need if they want to get back to the playoffs for the first time since 2011. Nola allowed only two singles and retired 13 straight going into the eighth. He did not walk a batter.

He took no-decisions in his first two starts and lost his last outing, when he needed 92 pitches to get through five innings against the New York Mets. Nola had a nine-pitch first on Sunday, and struck out two in the second, setting the tone for one of the more dominant starts of his career. 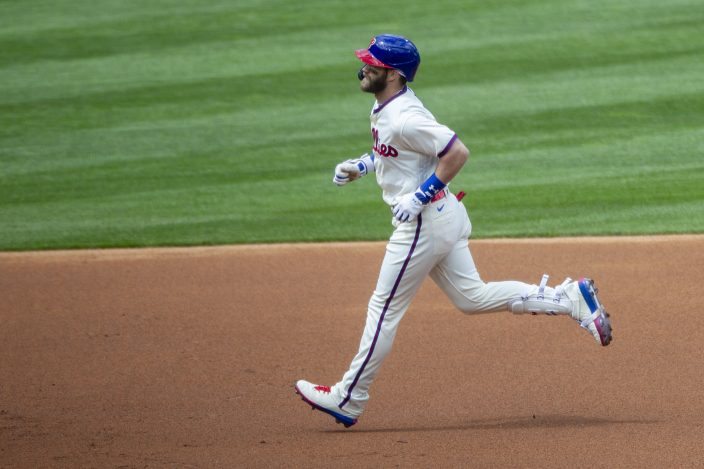 Philadelphia Phillies' Bryce Harper (3) runs the bases after hitting a home run during the first inning of a baseball game against the St. Louis Cardinals, Sunday, April 18, 2021, in Philadelphia. (AP PhotoLaurence Kesterson)

Harper sat out Saturday’s loss after waking up with tightness in his lower back. The Phillies’ star outfielder looked fine when he crushed his third homer of the year into the second deck in right. His 111.8 mph shot off righty John Gant (0-1) went 425 feet.

Harper came in batting .238 — yet ranked a solid 11th with a .994 OPS. He also walked and doubled off Gant, and Harper singled off reliever Giovanny Gallegos in the seventh.

Gant struck out five and walked five in five innings. Alec Bohm touched him for a sacrifice fly in the fifth inning for a 2-0 lead. 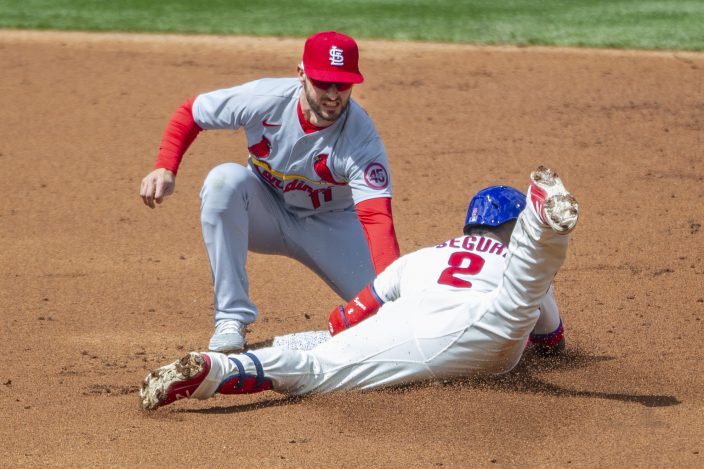 Philadelphia Phillies' Jean Segura, right, is safe at second on a double before St. Louis Cardinals shortstop Paul DeJong, left, can make the tag during the second inning of a baseball game, Sunday, April 18, 2021, in Philadelphia. (AP PhotoLaurence Kesterson)

Nola has long been considered Philadelphia’s ace, often by success like his 17-win season in 2018. Sometimes by default, when he won 17 games combined over the last two seasons at the top of an underwhelming staff. Nola was the seventh overall pick in the 2014 amateur draft and quickly reached the majors the following year.

Nolan needed to become a stopper -- and he came up big a day after the Cardinals’ 9-4 win.

Yadier Molina led off the second with a single and that was the Cardinals' only hit until Paul DeJong singled to open the eighth. Nola struck out Austin Dean to end the eighth and earned a rousing ovation from 10,876 fans at Citizens Bank Park. It was Nola's 10th strikeout, his 17th career double-digit game. 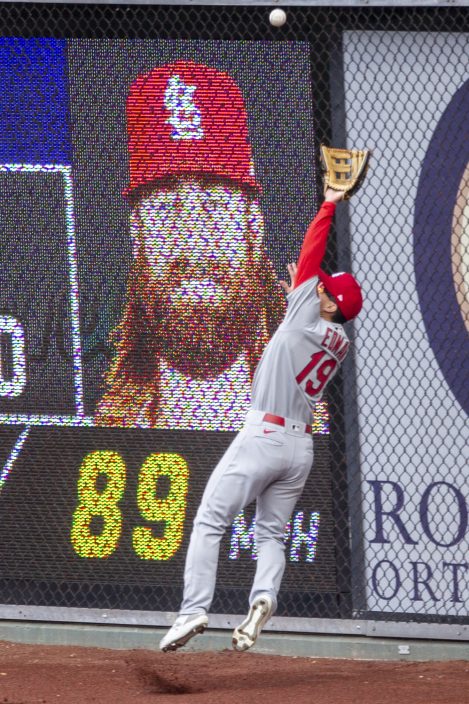 The Phillies celebrated the Phillie Phanatic’s birthday with cake, a card signed by fans, high-fives from the other city mascots such as Gritty, and videotaped well-wishes from Harper and other Philadelphia athletes and entertainment stars. The Phanatic made his debut — rather, was born — in 1978.

“It is an absolute joy to watch the Phils on Sunday during the Phanatic’s B-day and listen to Michael Jack Schmidt commentate,” original Phanatic Dave Raymond tweeted.

PLAY OF THE DAY

Cards RF Tommy Edman slammed into the fence and hung on to rob Bohm of a hit.

The Cardinals send RHP Jack Flaherty (2-0, 4.11 ERA) to the mound Monday against Washington. The Nationals have not named a starter. Flaherty has allowed four hits and struck out 12 over his last 11 innings.

Former Phillies manager Gabe Kapler returns for the first time since he was fired after the 2019 season to lead the Giants in for a three-game set. The Giants send RHP Kevin Gausman (-0, 3.20 ERA) to the mound against Philadelphia RHP Chase Anderson (0-1, 4.00 ERA).

“I plan on getting a little bit of time with some people I grew close to during my time in Philly,” he said Sunday.